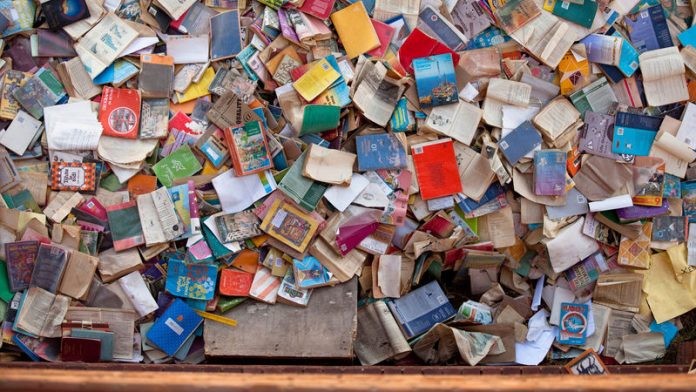 The government has allocated only about half the money needed in 2013/14 to supply all pupils with textbooks in each subject that they study, unreleased official data in the Mail & Guardian's possession show.

The same data show that, without intervention, next year's grade 12 class will be undersupplied with the books they will need to write matric.

The presentation referred to the "challenges" of achieving "universal coverage" – the official term for providing a textbook to each child in every subject. Such coverage would be achieved by 2014, Basic Education Minister Angie Motshekga said last year. But the financial allocations the presentation specified for all nine provinces tell another story.

About R3.3-billion is available in 2013 nationally for textbooks, it said. But this leaves what it called "shortfalls", which amount to about R2.9-billion in two crucial areas.

The first is the money needed to rectify (or "top up", in officialese) the ongoing undersupply of textbooks in grades one to six and grade 10 – that is, the grades in which the new curriculum (known as "Caps") has already been implemented. About R1.2-billion is needed here, the presentation said.

The second is a shortfall of about R1.7-billion needed to achieve "full provisioning" of textbooks in the grades where Caps will be implemented next year: seven, eight, nine and 12.

Another official document the M&G has obtained provides a shocking glimpse into how these shortfalls are devastating textbook provisioning in KwaZulu-Natal. Entitled Discussion on Mechanisms to Increase Textbooks in the Hands of Learners, this document was presented by the province's top education officials at the same August 6 workshop.

In each of the five grades where Caps has already been implemented, less than half the necessary textbooks has been purchased, the document showed. This analysis focused on more than half of KwaZulu-Natal's 6 000 schools – namely, the 3200 schools whose budgets are managed by the province (so-called "section 20" schools).

Books shortage problem
Central to the problem is that "the amount of money allocated for textbooks has not increased", the document said. Yet the "number of learners each requiring a textbook in each of the subjects had increased", and "the unit price of textbooks in 2013 is more than in 2012".

One consequence is "an increased number of learners sharing textbooks". Making a dreadful situation even worse is that schools have not yet purchased textbooks in natural science and technology for grades four, five and six "due to the late arrival of [the nationally] approved textbooks [catalogue] in 2012". 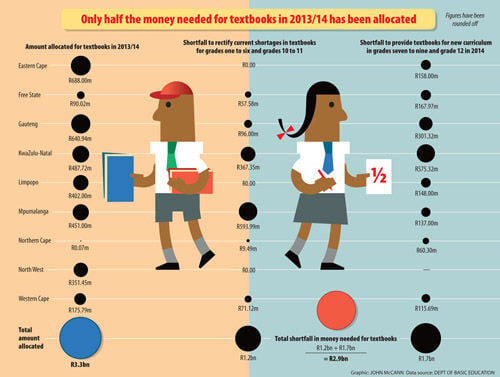 A teacher in Senekal, Free State, told the M&G that pupils sharing textbooks was a common trend among schools in the region. "This does not prevail in my school only. It's a systematic problem because learners in other schools here are also sharing."

He said the books shortage problem has bedevilled pupils for years. "In my 12 years of teaching in Senekal, there has not been a year in which learners had all the textbooks they needed. This is why the system continues to produce learners who can't read and write."

The two official documents as well as testimonies, including one from the Senekal teacher, collectively paint a picture that wildly contradicts the rosy update on textbook delivery the basic education department gave Parliament on May 28 this year.

KwaZulu-Natal had received 100% of its textbooks and the national average was 99.9% delivery, the department told the basic education portfolio committee.

They are percentages of how many books provinces ordered, which is limited to what funding allocations they receive for such orders, she said.

Such data therefore does not closely match "what is [actually] needed in schools", and provinces struggle to buy sufficient books because most of their budgets go to salaries, Lovemore said.

A textbook publisher who asked not to be named told the M&G: "It seems clear that the government has not been able to purchase a textbook for every learner in every subject that he or she takes."

The fact that KwaZulu-Natal's most severe shortage was in grades where Caps had been implemented this year (four, five, six and 11) suggested that the national department had failed to plan properly in its rush to implement the new curriculum, the publisher said.

Nikki Stein, attorney at rights organisation Section27, said: "What this confirms is that reliable systems to monitor textbook delivery are not in place, and so it cannot be determined each year which schools have received their textbooks and which schools are still waiting."

Stein and Lovemore expressed caution about extrapolating from the shortfalls in funds allocated for textbooks to how many of the country's 12-million pupils are affected.

"It is dangerous to do so because there has not been any kind of independent audit looking into the numbers of textbooks in the hands of learners across the provinces," said Stein.

Lovemore pointed to extreme regional variations in delivery: "You'll find that coverage is far better in well-resourced areas – that in the Eastern Cape urban areas have better coverage than rural areas. I would not like to estimate, but I'll ask the minister in formal questions."

Basic education spokesperson Panyaza Lesufi told the M&G:  "As matter of principle and policy of the department, we don't glorify so-called leaked documents with comments. However, for the record, all funds needed for the rollout of learner and teacher support materials have been secured through the pending budget adjustments from national treasury as well as provincial treasuries and we remain on course to deliver [these materials] to our learners as from the beginning of September 2014."