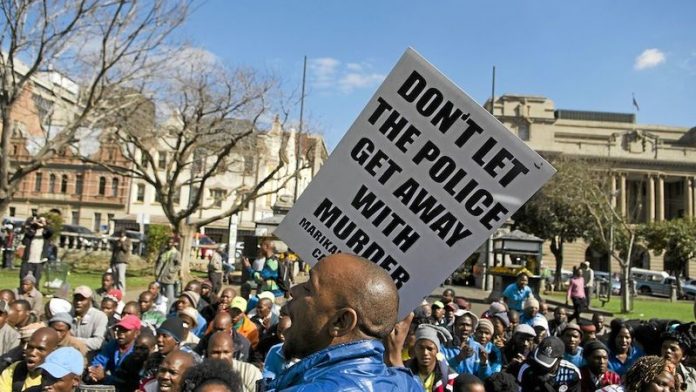 On Monday, the Constitutional Court dismissed an application to compel the state to fund legal representation for the arrested and injured Marikana miners participating in the Farlam Commission of Inquiry.

All of the lawyers bringing the application must have known that it was a long shot. The claims made by the miners lay at the very periphery of the rights to legal representation, access to courts and fair trial guaranteed by the Constitution.

The court held that these rights did not apply at all.

Certainly, the commission itself is not a criminal trial. Testimony before it – and facts discovered as a consequence of that testimony – cannot be produced in subsequent criminal proceedings. But that shield is limited. The bulk of the evidence collected by the commission is not testimony, nor was it discovered as a result of testimony. There is nothing to bar the admission of that evidence in future criminal trials.

So the commission’s findings will undoubtedly decide a great many questions in any trial to which the miners may eventually be brought. How can those trials be fair, or “substantially just” as the Constitution requires, if the miners are not given a reasonable opportunity to shape the evidence before the Commission?

Legalistic
But anyone who has actually been to the commission knows that it is a highly legalistic affair. Days and days are spent in examination, cross-examination and re-examination. Objections are taken and upheld or overruled. The rules of evidence and procedure that ordinarily festoon a criminal or civil trial are applied daily. It is therefore perhaps too quick to conclude that section 34 was not properly engaged. Indeed, the court could only bring itself to hold that section 34 did not “necessarily” apply before moving on – in effect leaving the section 34 issue hanging.

Perhaps the most obvious part of the miners’ case was that it was a breach of the right to equality in section 9 of the Constitution for the state to fund the families of deceased miners but not the miners who survived with sometimes horrific injuries, only then to be arrested for the murder of their fallen comrades.

The court reduced the section 9 claim to a plea for “fairness”, which, however laudable, did not authorise it to intervene. That is not quite right. Fairness was certainly a big part of the miners’ case, but so was rationality. Under section 9 (1) of the Constitution, irrational distinctions drawn by organs of state can be set aside as unlawful. The court did not address the application of section 9 (1). If it had, it would surely have been hard-pressed to find that the distinction drawn by the state between the families and the arrested and injured miners was rational.

The rationality part of the miners’ case was dealt with, somewhat obliquely, when the court wondered out loud why the miners did not bring a review of the decision of Legal Aid South Africa not to fund the miners. That may well be a good question, but the miners’ failure to launch a review did not preclude the court from considering the rationality question.

Arguably, the court should have said nothing at all about the merits of the miners’ reliance on these constitutional rights. Ordinarily, the court hearing an appeal against an interim order confines itself to whether it is in the interests of justice to intervene with a lower court’s decision on direct appeal at such an early stage of the case, in which the final decision can go either way. The court answered that question very firmly in the negative. Its decision then to remark on the merits of the case will place the miners at a disadvantage if they return to the high court for a final order.

The court’s decision has been greeted a little uncritically. Eusebius McKaiser calls the decision “excellent” on Twitter. Johan Kruger of the Centre for Constitutional Rights says that the decision “cannot be faulted”. Kruger added caustically – and incorrectly – that the miners, the Association of Mineworkers and Construction Union (Amcu) and the families of the deceased are represented by 20 advocates. They are actually represented by a team of six, all acting for sharply reduced rates. Only one of them is asking for state support. He has been working for nothing for some time.

Lopsided
In truth, the court’s decision is neither excellent nor faultless. It is understandable, justifiable, but surely not the court’s greatest moment. The court had a chance to enable the miners – and the families and Amcu, who will not rejoin the Commission without them – to be fairly and adequately represented before the most important commission of inquiry in South Africa since the Truth and Reconciliation Commission.

Not only would their continued participation add crucial balance to what will otherwise be a lopsided investigation, it would also enable the victims of the Marikana massacre to participate in the only major institutional effort to put things right. In doing so, they may achieve a degree of healing, closure and perhaps even some reconciliation with the state that maimed them and took the lives of their loved ones.

Rightly or wrongly, the court decided not to take that chance. Whatever else may be said of the court’s decision, it is a sad one.

Stuart Wilson is the executive director of the Socio-Economic Rights Institute of South Africa, which represents the families of 36 deceased miners and Amcu at the Commission. These views are his own.