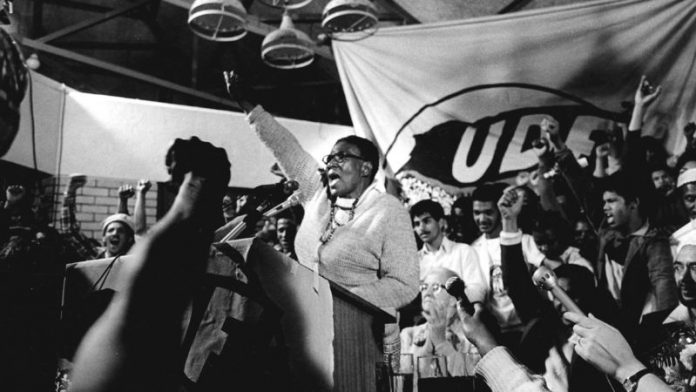 Thirty years ago this week, Reverend Frank Chikane addressed a packed Rocklands Civic Centre near Cape Town, crammed with representatives from hundreds of affiliate organisations with dreams of a transition to a nonracial democracy.

It was August 20 1983, the auspicious launch of the anti-apartheid movement, the United Democratic Front (UDF), in the suburb of Mitchells Plain on the Cape Flats. Although the UDF was an umbrella of about 700 broad-based affiliates, it was also unofficially an internal wing for the then banned ANC. Chikane was a founding member of the UDF and later became its vice-president.

“Organisations had been banned and we had reached a stage where we believed mass action could reach the level where the apartheid system would not be able to impose its will on us,” Chikane told the Mail & Guardian this week.

The founders of the UDF had considered using the Freedom Charter as a founding document but decided the principles on which the UDF was formed had to be innocent enough not to look like the ANC, he said.

“We also wanted to attract Azapo [the Azanian People’s Organisation] and others and open it up to let every South African participate, black and white, and the unions,” he said. “We succeeded in the main but we never got Azapo to come on board.”

Two years later, the government took steps to control the massive level of resistance in the country. Chikane was one of 16 charged with treason and contravention of the Internal Security Act. The charges were based on the accused singing liberation songs and making anti-government speeches but they were eventually withdrawn against all accused.

Although he would face further arrests and imprisonment, Chikane continued to dedicate his life to the struggle until the unbanning of the ANC and its alliance partners in 1990.

“At the end of the day, mass mobilisation on the ground was what created the space for liberation. Indeed, a miracle happened,” he said. “No other country had experienced a movement at such a mass level.”

What was especially different about the UDF, said Chikane, was that comrades would not die for the organisation, they would die for justice. Where people made the mistake, he reflected, was in thinking that those who came to the struggle could not be corrupted. Everybody at the time believed that the apartheid system was unjust and ungodly.

A former head of the World Council of Churches and then a senior member of the government under Thabo Mbeki, Chikane is today following in the steps of his father as a pastor of the Apostolic Faith Mission Church in Naledi in Soweto and working with the poor.

'Allan Boesak, Trevor Manuel'
In Rocklands where the UDF began, a former member of the movement, Isaac Langeveld, is unhappy with the way things have turned out. We stood chatting this week outside the civic centre while the 62-year-old former activist recalled how he risked his life to try to hear all the speeches.

“The place was so full, I had to climb up on to the rafters just to be there. They all came to speak: Allan Boesak, Trevor Manuel and others.

“Then we helped to make it happen, to work for change. We burnt tyres in the roads, we carried out the campaigns of resistance.

“But I don’t know what we have achieved because people here are still living in poverty. Promises were made and not kept. I have started working with the youth, as they are our future now.”

His view was shared by another former UDF member, Dawood Meyer, now 63, who also lives in windswept Rocklands. He said he was also present at the big launch and was involved in the resistance campaigns run by the UDF.

We surveyed the statue erected in honour of the UDF and he shook his head sadly.

Controlled patronage
“It has been a big disappointment for us as there is still so much poverty around,” he said. “Ever since 1994, they have forgotten about us. The government used the UDF for its own purposes.”

A 19-year-old born-free walked by. He said his family live in Rocklands and had been part of the UDF. He asked not to be named because he said he wanted to be honest about his feelings.

“It seemed like something amazing happened back then and everybody expected the world to change. But for us, there has been no upliftment here in Mitchells Plain. And it is not right. People are living in poverty all around me and there is no unity in this democracy.”

But Chikane has faith that the focus will fall on the poor and said it is an anti-ANC thing to serve self-interest. He believes committed cadres now need to take a stand against controlled patronage, which causes people to fear losing their jobs or to fear they won’t get tenders.

“I believe everyone is talking about it. But there needs to be enough people bold enough or committed to reach that stage. We have the building blocks for dictatorship. There is a fear to stand for the right things and we need a few people committed to lose whatever they have.

Why the coloured vote has been so elusive for the ANC

Emergence of the new struggle