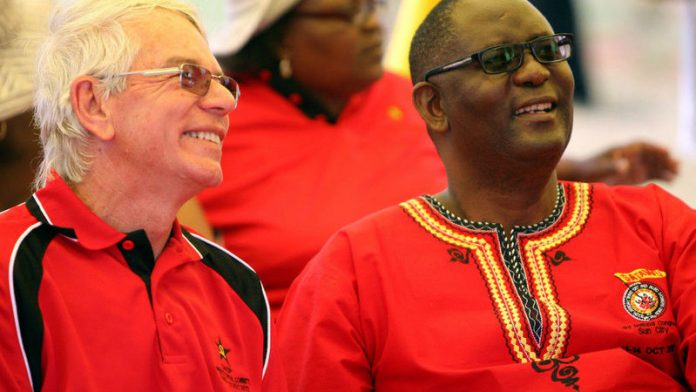 Speaking at a South African Communist Party (SACP) media conference on Sunday, general secretary Blade Nzimande and his deputy Jeremy Cronin, defended SACP against allegations that they are also part of a campaign to divide Cosatu and turn it into a "labour desk".

"The unity of Cosatu is priceless and affiliates such as Numsa [National Union of Metalworkers of South Africa] are out of order. We [SACP] will engage Numsa about their reckless language. They know it is dangerous to blame us for Cosatu's problems. They just want to draw us in and we refuse."

Cosatu and its leaders and affiliates have been at loggerheads since the federation's suspended general secretary Zwelinzima Vavi was accused of rape by a junior staffer in July.

At the conference, which was called following the SACP's central executive committee meeting, Nzimande lashed out at unions calling them vigilantes who are killing their own workers.

Speaking about Marikana's first anniversary on August 16, he said, "Unions were queuing like vultures wanting to feed on the carcass of the NUM [National Union of Mineworkers]."

Chasing their own tails
Cronin repeated his position on the challenges facing Cosatu, saying the SACP was interested in developing a sustainable strategic response to the troubled union. "The danger in any political situation, and particularly one that is fraught with difficult challenges, is that we easily become absorbed and overwhelmed by the front-page headlines in sensation seeking commercial media," he said addressing the Southern African Clothing and Textile Workers' Union's 12th national congress on Friday.

Cronin warned that members of the alliance will be caught chasing their own tails, and fail to carry the struggle of the real opponents of the working class. "We can easily become absorbed by disputes between personalities and factions, by leaks and palace politics. It is no secret that Cosatu is going through perhaps its most difficult period ever."

He emphasised that as a consistent ally of Cosatu, the SACP treasures the left wing, working class, socialist axis between the party and Cosatu. He added that the SACP is working actively to build an ANC that is a disciplined force of the left.

Cronin went on to agree with Nzimande, saying if Cosatu continues to undermine worker solidarity through competition between affiliates it will weaken the entire liberation movement. "This will diminish any prospects of rolling back monopoly capital and building an economy based on the principle of from each according to their ability, to each according to their needs."

Both Nzimande and Cronin denied Numsa and Food and Allied Workers Union's allegations that Cosatu's alliance partners want to turn the federation into a "labour desk", instead the two claimed that the SACP needs a robust, independent and militant Cosatu. “Of course government is not above criticism. Of course the working class must vigilantly defend its interests and carefully monitor that there is not corporate capture of government and of the bureaucracy. But the trade union movement needs to bear in mind that it is itself not immune to corporate capture,” he reminded.

Progressive trade unions
Cronin credited the tension and factionalism within Cosatu to competition over access to investment arms and retirement funds, calling for a thorough review. "Trade unions always need to navigate between two extremes. On the one hand, the bread and butter of any trade union movement must be the defence and advancement of the immediate interests of workers on the shop floor: wages, conditions of work, health and safety concerns."

But he argued that a progressive trade union cannot simply be workerist and economistic as well as the voice of "civil society" over the state. Progressive trade unions, he said, have to engage on the wider political terrain; not only as an opposition but actively influencing and consolidating democratic state power and capacity.

"We must say self-critically as alliance partners that over the recent decade we have hardly succeeded in organising and mobilising the urban and rural poor – apart from during election campaigns," Cronin said.

Nzimande ended the conference with the re-assurance that the SACP as alliance partners are 100% behind the ANC for next year's elections.