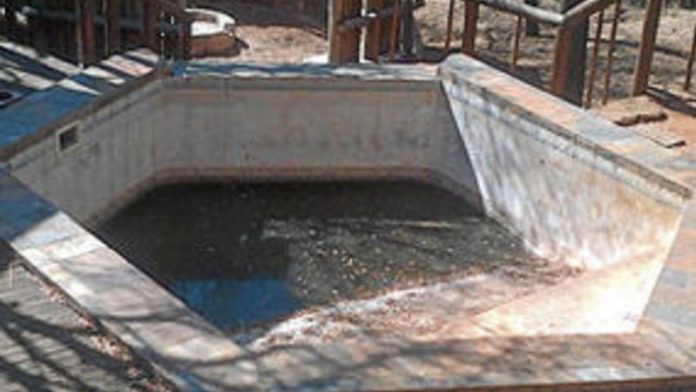 Instead of greenery, the spookily deserted wooden building is decked in spiders' webs and bird droppings. Further off, where antelope once grazed in the hot, still distance, there is only dust and dry grass. Inside stand a few items of broken furniture.

Many of the doors and windows are broken.

This is the once-thriving Nyala Game Lodge in rural Mamerotse, near Brits in North West. It stands on 7565 hectares, which, together, are valued at an estimated R120-million. The land was restored to the Mamerotse and Dikgatlhong communities in 2006 under the government's land restitution programme.

Allegations about how some of the land, which had once been developed for agriculture and tourism, became barren and unproductive are contained in a pending application in the North West High Court in Mahikeng, brought by angry members of the Dikgatlhong and Mamerotse communal property assocations (CPAs) as part of the winding up process of the CPAs.

The row highlights flaws in the CPA system, which was passed into law in 1996 to hold and manage restored land on behalf of beneficiaries.

According to Ruth Hall, associate professor at the Institute for Poverty, Land and Agrarian Studies (Plaas) at the University of the Western Cape, disputes between CPAs and beneficiaries are common.

"The problem with CPAs is that the committee responsible for governing the land on behalf of members often treats the association as a business enterprise with the aim of making money from the land for their own personal gain," Hall said. "This is especially true in communities where the beneficiaries are not very educated or knowledgeable about the CPA's role. They often don't receive any benefits from land that rightfully belongs to them."

Central to the row is the president of the long-established National African Federated Chamber of Commerce (Nafcoc) in North West province, Charles Moagi.

Maladministration
For the past seven years Moagi has chaired the Dikgatlhong CPA and community members say he is also the power behind the Mamerotse CPA, even though he holds no position in it.

In its court papers the Mamerotse Interim Committee which represents land beneficiaries in both of the CPAs accuses Moagi of "maladministration, financial mismanagement, secrecy and corruption".

Saul Mamorave, a 74-year-old pensioner amaBhungane met at the abandoned Nyala, complained: "This lodge can be world class, but because Moagi doesn't look after it, it's not making any money. If he will just let us manage it we can get what we deserve."

Another resident, Mike Seeletsa, a beneficiary of restitution in both Dikgatlhong and Mamerotse and the chair of the Mamerotse Interim Committee, accused Moagi of letting "intruders break in and vandalise the place. There's no one here to look after this lodge and there's no electric fence. That's why the equipment has been broken or stolen."

An asset register Seeletsa showed amaBhungane indicates that some tenants are occupying the land illegally and have not paid rent for some time.

The committee's Pretoria-based advocate, Sybrand Tintinger, will ask the North West High Court to appoint a liquidator to investigate the affairs of both CPAs before winding them up. "After the investigation the liquidator should take charge of the CPA's affairs and make recommendations to the court," said Tintinger. The North West High Court is currently serving the application on both associations.

Moagi hotly denies the allegations against him as "unfounded" and says they are "currently under investigation by the public protector".

Allocated shares
"We reserve our right to comment pending the public protector's report," he said.

But Nyala is only half the story. Just a kilometre away stands the Dikgatlhong Game Lodge, surrounded by an abundance of trees, water and wildlife. It offers game drives, a conference room, a swimming pool and tennis, volleyball and squash courts. Its chalets and rooms, ranging from standard to luxury, all have DSTV and cost between R200 and R400 a night.

The company's memorandum of association shows that Moagi and four other CPA committee members each owns 20% of it. Community members insist they were never consulted when these shares were allocated.

"These shares should have been registered as CPA shares, with the involvement of the community," said Seeletsa.

An investigation by amaBhungane revealed that 19 farmers are leasing land from the CPA for a total annual rental of R2.3-million. In an interview, crop farmer Conrad Griessel said he pays R297200 a year into the account of the Dikgatlhong CPA.

Payment
The community claims that Moagi collects the money without consulting them or getting their permission. "We were never consulted when our land was leased out and we have never received any money from these agreements," said Jack Mothabing, another supposed beneficiary.

Moagi has turned this allegation against his accusers, alleging to The New Age newspaper that the farmers who occupy property belonging to the Dikgatlhong CPA have paid community members who are not authorised to receive payment.

Moagi is not a resident of Dikgatlhong or Mamerotse and the communities are baffled by how he became chairperson of the Dikgatlhong association and assumed a position of influence in its Mamerotse counterpart.

Members of both communities claim they did not choose him and were not consulted on the decision to convert their land claims into an association under the 1996 Communal Property Associations Act.

"When Moagi was first appointed chairperson we trusted him and thought that he would help us with our land, but this never happened and it is still not happening," said Seeletsa.

Moagi did not respond to a question from amaBhungane about how he rose to leadership positions in both CPAs.

Their revenues appear to be significant: in one document dated October 14 2010, the Dikgatlhong CPA gives its total income over the past 19 months as a shade under R3-million including R2.2-million from agricultural leases and about R629000 from tourism.

The beneficiaries also accuse Moagi of violating the Dikgatlhong CPA's constitution and the legislation, which stipulates that the term of committee members "shall be for period of two years ending at the third annual general meeting, and that this procedure [should be repeated] every 24 months with the aim of members democratically electing [them]".

Violently disruptive
Moagi is also accused of not making documentation available to the community to show how the CPA conducts its affairs and administers its finances.

Annual general meetings, the constitution stipulates, should be held every March. Yet Kekana insisted that the community has never received financial accounts and that there has not been an AGM since 2009.

Conciliation does not seem to have brought the warring sides together. Community representatives were shattered by Maharaj's report, which found that "both the Mamerotse and Dikgatlhong CPAs must continue with the good job they are doing and must get a court order from the high court if the beneficiaries are interfering with its activities".

They accused her of bias and of abruptly changing her position, as she had initially criticised the management of the CPAs.

In a phone interview Maharaj said community members were "hooligans" who had been "violently disruptive".

"I was intimidated and threatened in an open meeting in front of 800 people. They said that they know where I live and they are going to kill me if I proceed with regularisation," she said in a subsequent email.
The dispute was also taken to the public protector, which found that because it did not involve the mismanagement of public funds, it had no reason in investigate further.

The land affairs department was asked a range of questions about the Dikathlong/Mamerotse land dispute, but had not replied at the time of going to print.

An opportunity to create land owners

Communal property associations (CPAs) were enshrined in law in 1996 as a rider to the land restitution process, to facilitate the joint holding of land claimed by whole communities dispossessed under apartheid.

The CPA Act recognises the necessity for CPAs to function in a non-discriminatory, equitable and democratic manner so that they are accountable to members.

Ruth Hall, associate professor at the Institute for Poverty, Land and Agrarian Studies (Plaas) at the University of the Western Cape, said the reason for the establishment of associations was to give communities the opportunity to hold land and manage it in common in a democratic fashion.

The architects of the land reform process envisaged that instead of subdividing properties into individual plots, people would hold land together, deciding who would use what for individual or household purposes, while also keeping resources that would be used together, said Hall.

Responsibility for the implementation of the CPA Act lies with the department of rural development and land reform. This includes writing a constitution for an association, facilitating the first election of a CPA committee and chair and ensuring it holds annual general meetings. — Karishma Dipa