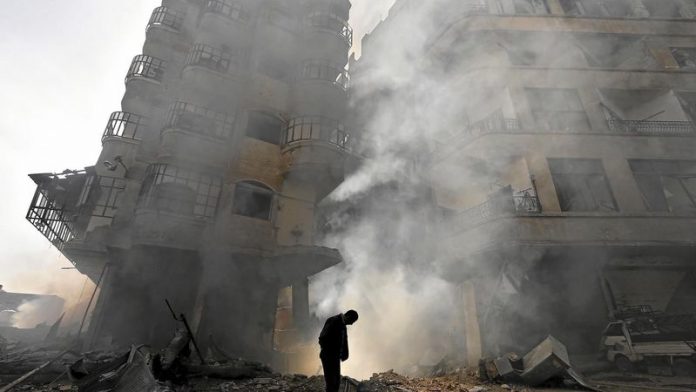 Syria will press on with its military efforts despite any potential foreign strikes on its territory, Syrian foreign minister Walid al-Moualem said on Tuesday, adding that any strike would serve the interest of al Qaeda-linked rebel groups.

"The [government's] military effort will not stop around Damascus. If the purpose is to limit the victories of our armed forces, they will not be successful," al-Moualem told a news conference.

Foreign opinion on the correct response to the crisis is very much divided.

Denmark adding pressure
Denmark said on Tuesday that it was prepared to support "alternative responses" if the United Nations Security Council fails to take action on Syria over its use of chemical weapons.

"We hear from our closest allies that there is no doubt that chemical weapons have been deployed in Syria, and that Assad used chemical weapons against his own people," Prime Minister Helle Thorning-Schmidt told the Danish public broadcaster TV2 News.

Denmark would, however, "listen carefully" to the UN Security Council's assessment, she said.

Turkey a vocal critic
Turkey's foreign minister Ahmet Davutoglu has also urged action against the war-torn nation and said that the suspected chemical attack in Syria was a crime against humanity that must not go unpunished.

Davutoglu was speaking as Western nations appeared to be gearing up to launch military strikes on Syria over the attack near Damascus last week that activists say left hundreds of people dead.

"This is a very open violation of international law," he was quoted as saying by local media.

Davutoglu had said in remarks published Monday that Turkey would join an international coalition against neighbouring Syria even if the UN Security Council failed to reach consensus on the issue.

Ankara has joined several Western governments in blaming the regime of President Bashar al-Assad for the toxic gas attack last Wednesday but Damascus has denied any responsibility.

Turkey, one of the most vocal critics of the Assad regime and one of the states most affected by the civil war on its doorstep, has stepped up diplomatic efforts with its allies to exert pressure on Damascus.

Turkey has taken in around 500 000 refugees from Syria as well as army defectors and has repeatedly called on the international community to act on the conflict that has now killed an estimated 100 000 people.

Italians cautious
In contrast, Italy has ruled out taking part in any type of military intervention in Syria without UN Security Council approval, saying there was no alternative to "a negotiated political solution".

Bonino said there was a proposal to hold a UN Security Council meeting on Wednesday and the situation would also be discussed by Nato in Brussels on Thursday.

"Even the option of a limited intervention risks becoming unlimited," the minister said.

She said Italy, which has 4 000 troops in Afghanistan, was already "stretched" in other parts of the world.

But the Italian defence ministry said her remarks did not mean Italian air and naval bases could not be used by foreign countries for a hypothetical armed attack, although this would require parliamentary approval.

Use of the US military base at Sigonella in Sicily would not require such approval as it already operates under an existing Italy-US bilateral agreement.

Italian bases served as a key logistical platform for the bombing campaign in Libya in 2011.

Bonino called for "great determination" in pursuing a peaceful solution, including stepping up a campaign to force President Bashar al-Assad into exile.

"The indications we have reinforce the hypothesis that Syrian forces made massive use of lethal chemical agents, in particular sarin gas," Bonino said.

"We were surprised by the fact that they were not able to get there because the rebels did not agree to guarantee the mission's security. So the mission has been delayed until tomorrow," al-Moualem told a televised news conference. – Sapa, with additional reporting by Reuters