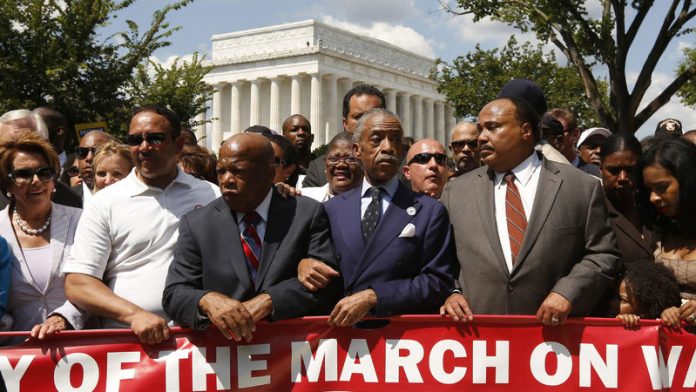 Today marks the 50th anniversary of Martin Luther King's "I have a dream" speech, a phrase that is widely quoted and changed the course of American history. In 1963, King led a congregation of about 250 000 people to the Lincoln Memorial in Washington DC, where he stood on the steps to deliver his speech.

According to the book Behind the Dream: The Making of the Speech that Transformed a Nation by the speech's co-writer Clarence B Jones, the four memorable words were not part of the original speech. King improvised on the day of delivery. If you watch the speech below, you can see that from about 12 minutes in he hardly glances at the text in front of him and continues to improvise.

Here are 12 other memorable speeches in history:

Sojourner Truth, 'Ain't I a Woman?' (1851)
Sojouner Truth was a women's rights activist and abolitionist who was born into slavery. Truth delivered a speech on gender inequality at the Ohio Women's Rights Convention in 1851 that became one of her best-known speeches. She went on to try and secure land grants for former slaves from the federal government after the Civil War. Here are some of the more famous lines from Truth's speech:

“If women want rights more than they got, why don't they just take them, and not be talking about it.”

“If the first woman God ever made was strong enough to turn the world upside down, these women together ought to be able to turn it right again.”

Abraham Lincoln, The Gettysburg Address (1863)
This memorable address lasted all of three minutes and proved to be one of the most succinct and pivotal speeches of all time. Abraham Lincoln's words were dedicated to the fallen soldiers of Gettysburg and in it he pleaded with the country to pay tribute to them by honouring liberty and equality – principles worth dying for. A few of the most famous lines are as follows:

"Fourscore and seven years ago our fathers brought forth on this continent a new nation, conceived in Liberty and dedicated to the proposition that all men are created equal."

" … from these honoured dead we take increased devotion to that cause for which they gave the last full measure of devotion – that we here highly resolve that these dead shall not have died in vain, that this nation under God shall have a new birth of freedom, and that government of the people, by the people, for the people, shall not perish from the earth."

Emmeline Pankhurst, 'Freedom or Death' (1913)
Emmeline Pankhurst delivered this speech in Connecticut in the US on November 13 1913. Pankhurst was British and visited the US on a fundraising tour. In her speech, she reminded Americans that they had to fight again as they did in the Civil War to end slavery: "Human life for us is sacred, but we say if any life is to be sacrificed it shall be ours; we won't do it ourselves, but we will put the enemy in the position where they will have to choose between giving us freedom or giving us death."

Here is one of the most powerful paragraphs from Pankhurst's speech:

"I am here as a soldier who has temporarily left the field of battle in order to explain – it seems strange it should have to be explained – what civil war is like when civil war is waged by women. I am not only here as a soldier temporarily absent from the field at battle; I am here – and that, I think, is the strangest part of my coming – I am here as a person who, according to the law courts of my country, it has been decided, is of no value to the community at all; and I am adjudged because of my life to be a dangerous person, under sentence of penal servitude in a convict prison. So you see there is some special interest in hearing so unusual a person address you. I dare say, in the minds of many of you – you will perhaps forgive me this personal touch – that I do not look either very like a soldier or very like a convict, and yet I am both."

Winston Churchill, 'Blood, Toil, Tears and Sweat' (1940)
This was Winston Churchill's first speech as Britain's prime minister and is regarded as one of history's best battle cries. In the speech, Churchill likens the outcome of the fight against the Nazis to the survival of Britain itself. The speech was delivered to the House of Commons of the Parliament of the United Kingdom during the first year of World War II.

Here are some memorable excerpts:

"I would say to the House as I said to those who have joined this government: I have nothing to offer but blood, toil, tears and sweat. We have before us an ordeal of the most grievous kind. We have before us many, many long months of struggle and of suffering."

"You ask, what is our policy? I can say: it is to wage war, by sea, land and air, with all our might and with all the strength that God can give us; to wage war against a monstrous tyranny, never surpassed in the dark, lamentable catalogue of human crime. That is our policy."

Jawaharlal Nehru, 'Tryst with Destiny' (1947)
This is regarded as one of the most famous speeches ever made in Indian history. Prime minister of India at the time, Jawaharlal Nehru, first delivered this speech on the eve of India's independence and declared that "at the stroke of the midnight hour, when the world sleeps, India will awake to hope and freedom". The landmark oration is said to capture the essence of India's 100-year, non-violent freedom struggle against the British Empire.

Watch a portion of the original video here:

Edmund Hillary (1953)
The first man to conquer Mount Everest, Edmund Hillary, is responsible for what is regarded as the shortest speech in history. On his return to base camp after climbing the world's highest mountain with Tenzing Norgay, Hillary greeted fellow mountaineer George Lowe with the single line: "Well George, we knocked the bastard off."

Nelson Mandela, 'An Ideal for which I am Prepared to Die' (1964)
Standing in the dock on the opening day of his trial on charges of sabotage, the Supreme Court witnessed some of the last public words spoken by Nelson Mandela before his 27 years in prison. The powerful monologue remains one of the most quoted in history and it was the first time Mandela spoke these words: "I have fought against black domination. I have cherished the ideal of a democratic and free society in which all persons live together in harmony and with equal opportunities. It is an ideal which I hope to live for and to achieve. But if needs be, it is an ideal for which I am prepared to die".

Maya Angelou, 'On the Pulse of Morning' (1993)
African-American writer and poet Maya Angelou became the first black woman to recite a poem at a presidential inauguration. On January 20 1993, Angelou addressed the crown with a public recitation of the poem at the inauguration of then-president Bill Clinton. It was the second time in American history that a poem was used at this type of address. Robert Frost was the first inaugural poet, at the 1961 inauguration of John F Kennedy.

Hillary Clinton, 'Women's Rights are Human Rights' (1995)
Hillary Clinton, then the first lady, delivered this speech at the fourth women's conference in Beijing, China. Her words encompassed the notion that women should be treated like every other human being and the main goal of her speech was an appeal to the audience to deal with injustices and unfair treatment of women all over the world.

Thabo Mbeki, 'I am an African' (1996)
On the passing of South Africa's new constitution, Thabo Mbeki, then vice-president, delivered this speech on behalf of the ANC in Cape Town. The speech is regarded as one that defined the mood and spirit of the political movement in Africa at the time and its delivery further enhanced and cemented Mbeki as one of the most popular political orators, likening him to Martin Luther King.

This is an excerpt of the original speech:

Barack Obama, 'The Audacity of Hope' (2004)
This is well-known as one of Obama's most famous speeches. Obama delivered the key-note address at the Democratic National Convention in Boston, Massachusetts, and is regarded as the speech that propelled him into the White House. Obama began the speech by giving the audience an introduction to his personal story and went on to explore themes of the American political system, nationwide unity and optimism.

Malala Yousafzai, 'Worldwide Access to Education' (2013)
Malala Yousafzai is a Pakistani education activist who spoke out against the education restraints the Taliban that ruled her area placed on girls. She documented her experiences in the form of a blog and when the Taliban discovered that she was the author, they attempted to assassinate her by shooting her in the head and neck.

Yousafzai was treated in the UK. She recovered and remains involved in women's rights and education activism. She addressed the United Nations in New York on her 16th birthday, calling for worldwide access to education for children.