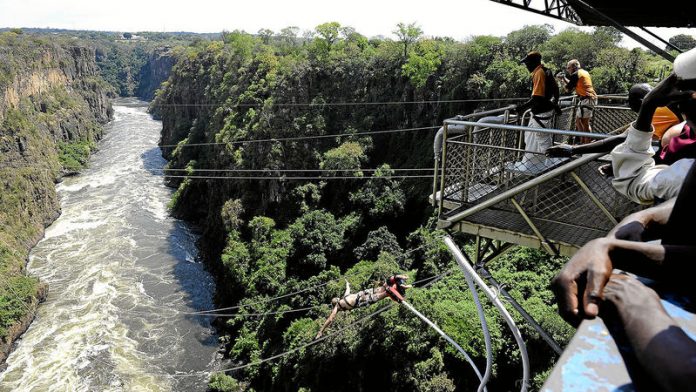 The general assembly of the United Nation’s World Tourism Organisation (UNWTO) was a huge success, with record attendances of the group’s members, and there is a spring in Mzembi’s step.

“Disneyland in Africa” is part of a range of new projects that Zimbabwe is planning as it tries to rebuild its tourism industry. Part of this strategy is to make Victoria Falls a new mecca for international conventions.

“We are going to retain this facility [the conference complex],” Mzembi said, gesturing at the structure that was the hub of the convention. “This is a key part of our vision for the future of our industry here.”

The new two-storey structure seats more than 1 000 people and is kitted out with the latest technology. Ahead of the UNWTO general assembly, ­telecoms companies invested more than $100-million in new infrastructure for Victoria Falls.

Land made available
The government is making available 1 200 hectares of prime land close to the town’s international airport. Investors, said to be a consortium of locals and foreigners, have agreed to build a new resort, complete with a Disneyland-style theme park, a new shopping mall, hotels and another convention centre.

Global tourism arrivals hit one billion in 2012, up from 995-million in 2011, according to the organisation. Of these, 14% travelled for business or conferencing, a statistic that obviously caught the attention of Mzembi and top industry players. Now Zimbabwe is bidding hard for top conventions.

“Beyond this conference I am proud to tell you that we have at least five major conferences next year,” said Shingi Munyeza, the head of African Sun, one of the country’s largest hotel groups.  “This shows that there is appetite for Mice [meeting, incentives, conferences and exhibitions]. We can host more. We now have the capacity.”

But it is a long road back for Zimbabwe’s tourism. Infrastructure, neglected for years, is only now beginning to be renovated, thanks to the UN meeting and the government’s decision to suspend duty on goods needed for the refurbishment of hotels.

Tourist numbers are recovering, but not fast enough. Mzembi hopes the conventions will help jump start the industry.

“You have seen what this single conference has done for Vic Falls in terms of business generated and new infrastructure. Imagine what could happen if we had this every other month,” he said. “Cities are inspired by mega events. Look at what the World Cup did for South Africa in terms of infrastructure.”

Worrying conservationists
Conservationists worry that any new development will disrupt the delicate ecology of the area and that large numbers of tourists may also be bad for the town.

Mzembi, however, insists that the site of the planned new resort is far from the falls. “We don’t want to interfere either with the old Victorian setting of the town or with nature.”

But why would an investor buy into this vision when, under empowerment laws, they would be allowed to own only 49% of their investment? It is a question Mzembi admits to have faced many times. He wants tourism to take a more moderate approach.

“I will enforce an affirmative action supply chain management system that takes locals into consideration first. We want to make sure those holding these existing assets get their input from our own producers,” he said. But, he admits that his government’s radical approach to indigenisation has hurt investment.

Attracting the growing Chinese market will be key for Zimbabwe.

An “approved destination status” awarded to Zimbabwe by China in 2006, supposed to encourage Chinese nationals to visit Zimbabwe, has yielded only a trickle of visitors.

“We have better attractions. I have asked the Chinese, why are your people going to Niagara Falls? Compared to the Vic Falls, they are like a boy peeing in a pot.”

Zimbabwe could attract more than 10-million Chinese tourists a year, yielding $1-billion per year in tourism revenue, according to officials.

South Africa’s economic, racial and social divides invite unrest that will leave us all worse off
Read more
Africa

The Wakashio freighter spilled 4 000 tonnes of oil into the sea off the Mauritian coast. Now the island’s residents are working together to recover from the disaster.
Read more
Advertising
Continue to the category
Politics