Key ingredients of a Murray-Djokovic match 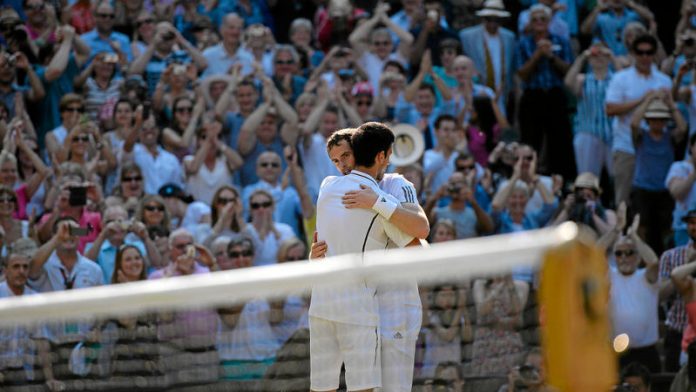 Two on the spin in slam finals in New York and Wimbledon, with a semi-final scheduled on their return to Flushing Meadows this week.

In a rivalry as physical as it is tactical, as reliant on strength as guile, they have each stretched for any conceivable edge. However, the Scot is having doubts now about his friend’s obsession with the central platform of his regime: his monk-like eating habits.

For a while, Murray experimented with the dietary practices Djokovic has been selling to the world enthusiastically since he was converted to them three years ago by a fellow Serb, the intriguing Dr Igor Cetojevic.

Djokovic is such an evangelist that he has affixed his name to a book about it, Serve to Win, the 14-day Gluten-Free Plan for Physical and Mental Excellence – released, as expected, to coincide with this tournament, and it is a revelatory read.

He talks candidly about his early reputation for collapsing in tournaments, when he gained a reputation as a choker and a quitter. The root of his problems, according to Cetojevic, was his intolerance of gluten, the protein lurking dangerously for some in wheat and dairy products. Djokovic, desperate, perhaps, or daring, immediately subscribed to the theory and says that, 18 months later: “I was a different man. My life changed because I had begun to eat the right foods for my body, in the way that my body demanded.”

The foundations of Murray’s tennis are laid not just on the practice court, but also in the gym and the kitchen. Few players in the modern game pay as much attention to detail to their preparation. However, he also has a “sensible gene” and his feeling is that Djokovic’s diet is not what suits him.

“I tried it and it didn’t work,” Murray said. “In terms of nutrition and what I am eating I am not on a specific diet. I eat healthy food but it’s not something specific before a match. Last night I had red meat, the night before chicken and the night before that fish.

“I am just trying to make sure I am not eating the same things a few days in a row. When it comes to stuff on court, making sure you get the right electrolytes in places like this – where it’s so hot and humid you can be drinking six or seven litres in a match. So you want to know the stuff you are drinking is replacing what you are losing. It’s not possible to get through a match just drinking water.”

He sees the benefits of fine-tuning his eating habits, but he is no longer as obsessed with the method as Djokovic.

“All those things are important,” Murray says. “Making sure you are getting those energy gels and energy drinks on the court, but nothing replaces the work you do in the gym. If you don’t do that and find a good energy drink, it won’t make any difference.

“You need to put the work in off the court, in the gym, and if you do that you give yourself a good chance. But, once you get to these events with the climate as it can be, you need to make sure you are drinking the right things. Getting the right energy on board to get through a four and a half hour match.

“The last couple of years I went on the gluten-free thing, I tried it for a couple of months and felt awful. I lost all my energy and felt so weak. I didn’t feel it helped me at all. So I just went back to doing what I did before and it was working fine for me so I haven’t changed that too much since.”

Djokovic also puts in the work and, as he says, his famed elasticity improved only when he dropped weight through his diet, from 82kg to 78kg.

“Every morning I wake up,” Djokovic writes, “I drink a glass of water and do my stretching, maybe mixed with some yoga or tai chi, for 20 minutes. I eat a breakfast perfectly calibrated to my body for the day ahead – the same breakfast almost every day of my life.”

There follows a punishing schedule of hitting with a training partner for an hour, more food input, stretching, massage, lunch, weights, protein super-charge, more stretching, another 90 minutes of hitting, stretching and another massage.

“At this point,” he says, “I have been training for nearly eight straight hours.”

Whoever wins when they next meet, nobody can deny these long-time friends are making unprecedented sacrifices in pursuit of excellence. – © Guardian News & Media 2013