Riding the storm for economic growth 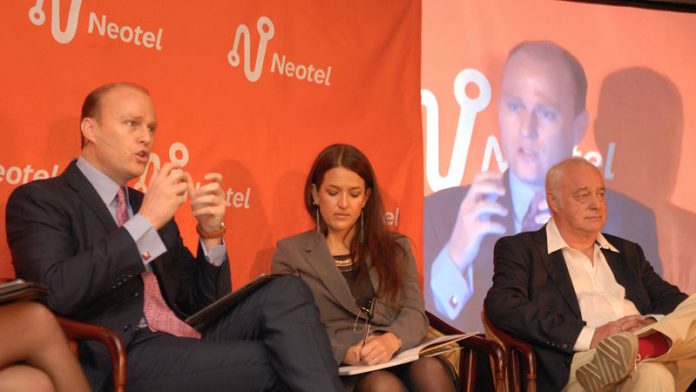 The Mail & Guardian in conjunction with Neotel hosted a business breakfast in Johannesburg on August 27 examining the prospects for South African economic success relative to Africa, Brics nations and the US.

Samantha Loring, an anchor at CNBC Africa, was the moderator of the panel, which included Matthew Birtch, lecturer of strategic management at the Gordon Institute of Business Science, Yolande van Wyk, chief executive of eWallet Solutions at First National Bank and Pat Stone, director at The Bargaining Institute.

“Having relatively quiet neighbouring countries, South Africans do not understand economic competitiveness as it exists between Japan and China or between France and Britain. Countries like Nigeria, Kenya and Tanzania are realising that they are fighting for a share of wallet on the continent, whereas locally we have not yet woken up to that fact,” says Birtch.

He says that Nigeria could become Africa’s largest economy in the near future because the focus there is less on internal politics and more on economic growth. According to Birtch, South Africa is no longer the gateway into Africa.

“Investors are entering Africa from the east and west. It is up to South Africa to focus on a broader debate about economics and not just talk about the ranking of the country relative to the rest of the continent.”

For van Wyk, one of the ways to do this is by looking at the innovation that is taking place inside the country.

“As South Africans, we can do more. We can create economic growth from our ability to innovate. Most of the local economy is driven by small businesses. Unfortunately, innovation is reliant on access to funding. Markets such as America and India have the ability to create innovation through start-up funding, yet in South Africa the majority of small business are self-funded.”

Stone says that South Africans are typically risk averse and often find themselves in a state of inertia, missing out on competitive advantages.

“A clear example of this is when it comes to the collective bargaining process in the country. The most prevalent way of going about it in South Africa is to let the process develop and lead to industrial action and then only getting companies to revise their mandate as opposed to negotiating more authoritatively from the start,” he says.

Productive workforce
But a productive workforce requires a foundation that consists of access to health and quality education. Birtch says that while the temptation exists to compare South Africa to a country such as China, the idea of context is critical.

“South Africa cannot just adopt a Chinese model or one developed for a Western market. These models are not designed with Africa in mind. Another challenge is the question of work ethic. It is very difficult when comparing to China, who can spit out thousands of PhD students, when we seem to have a mindset of a five-day work week and going on long holidays.”

He feels that it is a case of getting the basics right.

“While the National Development Plan is quite comprehensive it is also very complex for the man in the street to grasp. What the other Brics nations are doing well is to take people out of poverty through a combination of hard work and looking externally to other markets.”

The critical things that need to be addressed are poverty, unemployment and inequality.

He believes that politics and business need to get closer instead of moving away from one another as is currently the case.

Stone says one of the reasons for this is that in South Africa the tendency is to litigate too much.

“Productivity is essentially related to enterprises but there is a gap that national engagement needs to be used to assist in addressing. Most of the challenges in South Africa are constitutional ones that mostly result in making the lawyers rich. Our bargaining councils can structure minimum wage rates but they tend to adopt a one size fits all approach.”

Supporting entrepreneurs
Van Wyk says that FNB embraced the idea of challenging the status quo and approaching change from a radically different perspective.

“At FNB we compete internally to create better products for our customers.

“We are encouraged to fail and learn from our mistakes. Importantly, we are given the space and funding to pursue new developments if there is a business case for it.”

Responding to a question on balancing the drive for economic growth, while not impacting on the human rights of employees, Birtch admitted it was a challenging one.

“Looking at China, we have to be honest and say that the level of growth experienced there has been on the back of people working multiple jobs and making plenty of sacrifices. Yet, life for the average Chinese person has become infinitely better than 30 years ago.

“The reality is that China has grown on the back of exploitation, something that South Africa will not be willing to do.”

He says that another important thing to note is the differentiation between opportunity and necessity entrepreneurship.

Being different
He sees that the Brics nations are as different as they are similar.

“In China, the government is shrinking and is based on a meritocracy. The politicians are trained very well from an economic perspective to manage millions of people and significant budgets. In South Africa, we need to start thinking about making the country more commercially orientated.”

This has already started to happen with many people in the country taking on multiple jobs as they believe that relying on one salary is too risky. But he says that South Africa also needs to start thinking about owning and selling the share of wallet outside the country.

“China runs everything on a profit basis. We need to start taking those lessons to parastatals to become more profit-centric,” he says.

Another mistake many people make is to view Africa as a homogenous market, says van Wyk.

“Whenever we roll out products and services into different countries we take their unique needs into account. You cannot boilerplate solutions across the continent,” she says.

Van Wyk cites M-Pesa as an example of this.

“The socio-economic factors driving the success of the product were specific in the countries where it succeeded. People had difficulties in moving money around and could not rely on banks.

“So while it was successful in Kenya, taking it to Tanzania required a different approach as the market is so dispersed and the educational awareness campaign needed to be different.”

Stone says that he finds a certain sense of déjà vu from his experience in the UK as it was prior to Margaret Thatcher and how South Africa is now.

“Pre-Thatcher the country had most industries and also had a situation where organised labour was very influential with the government. At the moment, South Africa is running on a similar track. We plan for everything in this country, we are afraid of taking risks and have a situation where there are multiple ministers running the economy.”

He says that the country has enormous strength and resilience, but needs a leadership that gives people the freedom to tap into that.

“There is this constant fear that we will upset someone. You try and accommodate everyone with policies and procedures, but need to be careful of falling into a state of inertia.”

What next?
Stone believes that inclusive growth is needed to build on the tremendous improvements made in people’s lives already as the country approaches 20 years of democracy next year.

For van Wyk, the integration of youth in South Africa has resulted in young people being very hopeful for the future of the country.

“While adults are mainly negative, the youth is positive for growth. We have to enable growth into the future by making sure the schools can teach, hospitals can operate and business can do business,” she says.

Ultimately, Birtch says that a lot of this boils down to policy.

“South Africa has inspired so many people to make a success of their lives. However, the policy uncertainty that exists is still scaring away investors. Once that is addressed, the we can start building for economic growth.”