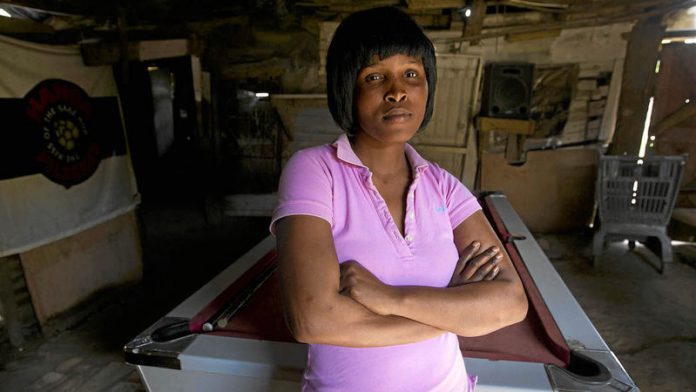 Activist Nkululeko Gwala was shot 12 times and left to die in the middle of a road on June 25.

He had been walking home at night after watching a Confederations Cup game at the Mgazi Tavern in Cato Crest, a densely populated shack settlement about 7km from Durban.

Members of Abahlali base­Mjondolo, a shack dwellers' movement formed in 2005 to fight for housing rights and land rights, said that two people approached him from behind and shot him.

Gwala's girlfriend, Thembi Mazubane, was among the first to arrive at the scene.

She told the Daily News that her boyfriend had been shot in the head and chest.

"I cried seeing him in that position. He was face down. It seemed as if his head had been filled up with nails," Mazubane told the paper.

Gwala's death came almost three months after the death of another housing activist, Thembinkosi Qumelo, who was gunned down in similar fashion. Both were housing rights activists and vocal ­critics against corruption in their municipality.

Gwala was a former member of the ANC. His membership from the party was terminated by the eThekwini structures in 2010. He later joined Abahlali baseMjondolo.

The day before his death, Gwala had led a rally against what Abahlali said was corruption in the municipality. He had also led several marches against the Cato Crest mayor in March and June.

The police investigating officer, Eric Maphara, said: "We have no leads. We have arrested no one and we are still investigating. People do not want to co-operate.

"We get information that 'so and so may know information' and when we get to that person he does not help us because he (or she) is fearful."

Gwala's killing came just hours after eThekwini mayor James Nxumalo and health MEC Sibongiseni Dhlomo – who is also chairperson of ANC in the city – met community members at the Cato Crest community hall to discuss the rising tensions that had led to two local councillors' offices being torched.

Gwala was among the leaders of a land invasion in ward one, Cato Crest, earlier this year, dubbed "Marikana".

"The movement has been christened 'Marikana' by some of our detractors within the ruling party because they say we are rebellious," explains Sicelo Ngdidi, an Abahlali activist.

For most of August, residents of Cato Crest occupied an unused piece of land belonging to a school and the council, according to local councillor Mzimuni Ngiba.

On September 3, about 80 municipal police and land invasion unit officers arrived at the ward, escorted by Ngiba.

The shacks were demolished despite an interdict issued by the KwaZulu-Natal High Court.

When approached for comment, Ngiba said: "I do not want to talk about this matter because police are still investigating and I am part of those accused. But I know that my conscience is clear."

Abahlali member Lindiwe Mazibuko has been living in Cato Crest for 14 years.

Her shack is made of corrugated iron and is filled with cupboards and clothes.

Since Gwala's death, she says, she fears for her life.

Mazibuko says she has received anonymous death threats by phone and has reported them to the police.

She says she is suspected of burning down the community hall four weeks ago – and fears she is now being targeted.

"Make no mistake. These people are gangsters. They can kill me," said Mazibuko.

Several other Abahlali members have gone into hiding as they fear that the burning of the hall has made the politically charged community targets for politically motivated killings.

Police have not made any arrests for the burning of the councillor's offices or the community hall.

There are a number of reasons why housing delivery is so acutely contested in Cato Crest, says Richard Pithouse, a scholar and lecturer in the politics and international relations department at Rhodes University.

"One is that it is invariably imposed from above without any sort of meaningful negotiation. This means that development that might look good on a spreadsheet can be experienced as catastrophic by its 'beneficiaries'.

"In one of the more bizarre cases, people in eTafuleni, many of whom have large homes, some with as many as seven rooms, along with grazing land, have discovered that the municipality considers their homes to be shacks and wants them to move into a transit camp – a government built and controlled shack settlement," says Pithouse, who has written extensively about the rise of the shack dwellers' movement and the political assassinations in Durban.

The recent turmoil in Cato Crest has opened new debates in the social movement.

Bandile Mdlalose, secretary of Abahlali, says the organisation is debating whether to continue its strategy of boycotting the elections.

"We have opened up this debate because we can't rely on our past strategies," says Mdlalose. "Some are saying by not voting we are actually voting but the problem is which party do you vote for because in one area the enemy is the ANC, in another area we are fighting the Democratic Alliance and another the Inkatha Freedom Party. That is the conundrum we are facing."

However, for Mazibuko and her slew of militants, next year's poll will pass without their vote.

"We are not voting next year.

We won't vote for corruption and political killings," says Mazibuko.

Abahlali is planning another mass protest in Durban on September16 to demand "land, housing and dignity".

Why Google is showing you white South African squatters

The limits of coloured nationalism

A perpetual life of mud, shit and fire