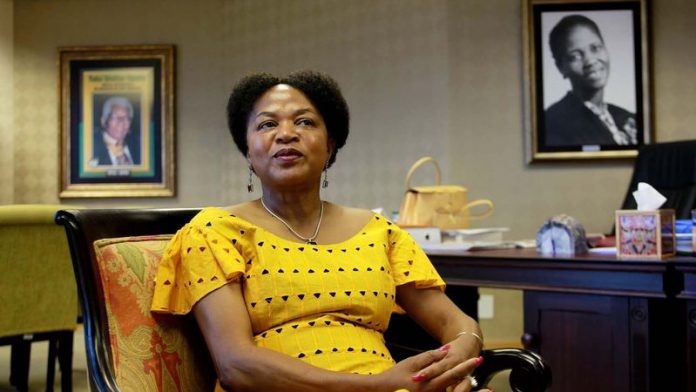 The law firm, commissioned by Gold Fields itself, found that the South African mining house had hugely increased Mbete's cut in a contentious 2010 empowerment deal in response to an alleged threat by her representative.

They recommended that Gold Fields "self report" the matter to the authorities. But the company's board disregarded the advice – and instead decided not to have the findings written up.

The law firm made no finding against Mbete, whose complicity would depend on her actions and state of mind.

Mbete referred comment to Gold Fields chairperson Cheryl Carolus, who answered on behalf of the board only. She insisted it had acted "in full compliance with the law".

The Gold Fields black economic empowerment (BEE) transaction has already drawn controversy for the way it channelled benefits to connected individuals assembled by a presidential lawyer and two ex-convicts.

The latest allegations are likely to increase concerns about the abuse of mining sector opportunities to extend patronage to a small elite.

One leg of this, the entity Invictus Gold, included a number of politically connected people, Mbete and Brauns among them. This led to a public storm of controversy.

Both Gold Fields chief executive Nick Holland and former chairperson Mamphela Ramphele have said in news reports that the department was prescriptive about who to include in the BEE structure.

Gold Fields has consistently denied wrongdoing but, in December 2012, its board commissioned the United States law firm Paul, Weiss, Rifkind, Wharton & Garrison (Paul Weiss) "to determine the facts and to provide recommendations to the board".

During the course of this year, the investigators gave two slide presentations to the board.

Sources with direct access have described the contents of key slides to amaBhungane. One said the full findings were "devastating" for Gold Fields.

October meeting
The findings relate primarily to an October 2010 meeting between Brauns, as chief architect of the deal, and Brian Mosehla, who acted as Mbete's "representative" to discuss her shares in Invictus.

Recently, Mosehla courted controversy over his alleged links to the disputed award of a state contract for the distribution of social grants. He was previously a finance head in Tokyo Sexwale's Mvelaphanda group.

By August 2010, two months before the Brauns-Mosehla meeting, Gold Fields announced that the department of mineral resources had given Gold Fields its South Deep licence and that the terms of its related BEE transaction had been finalised.

Early that October, Gold Fields detailed the empowerment consortium's structure in a public prospectus. According to this, one sub-group would be led by Mbete, ANC veteran Thandi Shongwe and Limpho Hani, the widow of struggle hero Chris Hani.

Brauns was to co-lead a different entity called Rich Cove Investment, holding a much larger 53% stake in Invictus.

Threat
But, according to Paul Weiss investigators, when Brauns and Mosehla met about a week after Gold Fields's announcement of the structure, Mosehla "threatened to scuttle" the deal unless Mbete was given a bigger stake.

It is not clear how Mbete or Mosehla would have had the power to sink the deal. However, it is understood that the department retained the right to cancel or suspend the South Deep licence if the empowerment deal was not successful.

It is likely that it was perceived that Mbete, as ANC chairperson, would have been able to influence department officials. 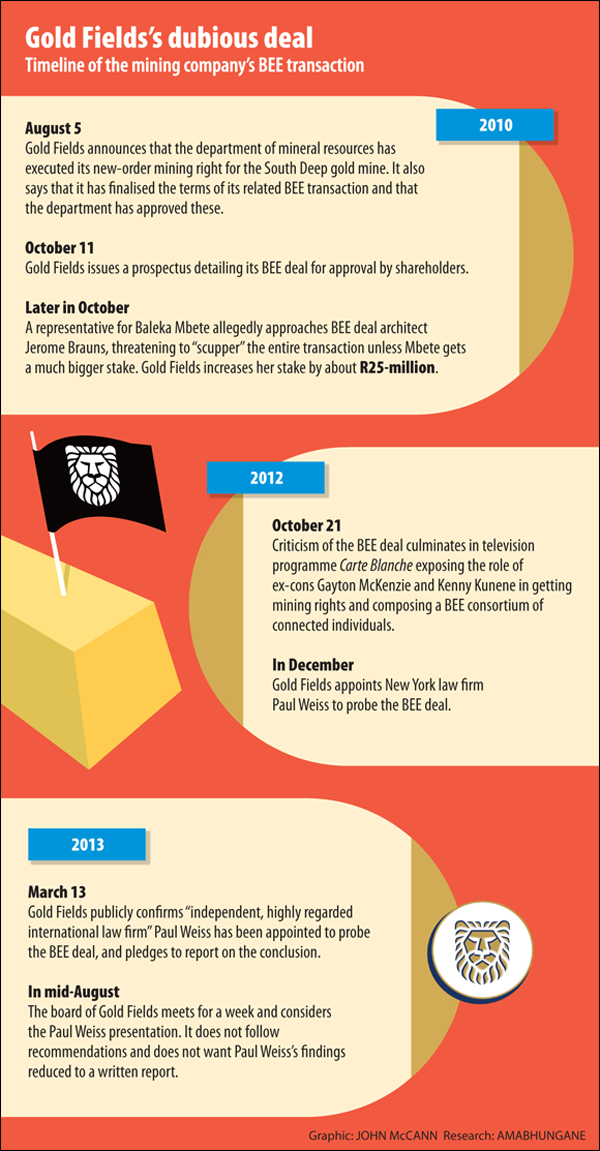 In any event, investigators referred to a subsequent, vaguely worded email from Brauns to Gold Fields, proposing to change the share structure to give Mbete a 10% stake in his company Rich Cove. Gold Fields complied.

Violation
The Paul Weiss investigators found this to be a violation of the anti-bribery provisions of the Foreign Corrupt Practices Act in the US, where Gold Fields has a secondary listing.

These events may also have breached South African anti-corruption laws, as well as Gold Fields's own code of ethics.

Among Paul Weiss's recommendations to the Gold Fields board was that they should "self report" the evidence to the relevant authorities.

Approached for comment, Carolus said the board had "acted deliberately and appropriately and in full compliance with the law".

"We do not discuss the advice of counsel and internal privileged discussions of the board," she said.

Mbete, who was in Liberia, said in an email: "Please refer all matters regarding Gold Fields to Ms Cheryl Carolus."

Elements of a cover-up

Gold Fields is "committed to the timely disclosure of information to its shareholders and the public which is full, fair, accurate and understandable", the company's code of ethics states.

And so, after appointing New York law firm Paul Weiss to probe its 2010 black economic empowerment (BEE) deal, it promised to do the right thing. It stated publicly: "Gold Fields will report further on this matter upon the conclusion of the investigation."

But the results, it seems, were too explosive. Instead of honouring its pledges of transparency:

But at least one of them resigned in anger, it appears, over the board's handling of the matter.

A day after the "restructuring" statement, the board issued another, cutting and pasting the same explanation but adding the contradiction that Roberto Dañino resigned "once it became clear that the board had concluded its examination of the BEE transaction".

He said this week: "I thought it was my duty to stay at the board and ethics committee to see that the investigation was finalised and that the board had considered its findings. Once the board made a decision, I decided to resign irrevocably. That's all I can say and you can draw your own conclusions."

BEE deal in a nutshell

After Mamphela Ramphele resigned her seat as Gold Fields's chairperson and launched her political career earlier this year, she had strong things to say about the South Deep empowerment deal.

In an interview with Business Day, she said the government had "forced" Gold Fields to include certain people in the black economic empowerment consortium, otherwise the licence would be denied.

She said it was an example of what the government had done to destroy mining firms' credibility.

In 2010, Gold Fields was in a difficult position. It needed the department of mineral resources to grant it a new-order licence before it could exploit its valuable South Deep gold mine on the West Rand.

But because Gold Fields's original BEE partner, Mvela Gold, had recently sold out of the company, the department insisted it find new empowerment partners.

Holland told Business Day last year that, after struggling for some time with "certain [officials] who decided they had a lot of power and authority and they were going to wield it", the company hired a consultancy, owned by ex-convict Gayton McKenzie, to assist.

Working with advocate Jerome Brauns, who had represented Jacob Zuma in his 2005 rape trial, McKenzie helped to structure a consortium of 73 shareholders in an entity called Invictus Gold. Gold Fields provided vendor funding, in effect giving Invictus a 9% stake in South Deep and 1% of Gold Fields itself.

However, when Gold Fields announced this structure, it named only 18 of the Invictus beneficiaries. The political flavour of these names plus Gold Fields's refusal to share the full list of 73 with journalists aggravated the controversy.