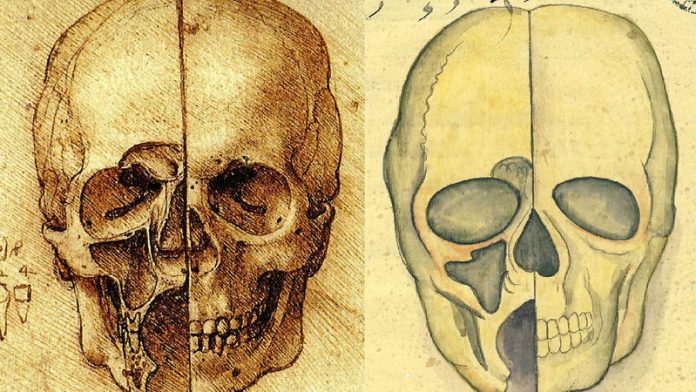 In 1489 an Italian artist obtained a human skull. He dissected it, sawing and cutting open the bone in order to investigate the internal anatomical structure.His aim: to investigate the relationship between the mind and the body, to study the fundamental processes that make humans tick.

He failed to find the mind-body connection, but in dissecting the skull he produced a series of meticulous, exquisite drawings of his findings that are some of the most precise and beautiful renditions of the human body ever committed to paper. The artist was Leonardo da Vinci, and his study of the skull initiated a fusion of art and science in a way never attempted before, and that has been seldom realised after.

Da Vinci was an extraordinary man — engineer, mathematician, inventor, musician, architect, botanist, writer, painter, sculptor, anatomist — a polymath whose scientific studies and artistic works were inextricably intertwined, not segregated and compartmentalised as we tend to find in today’s world.

In the 21st century we inevitably spilt academic endeavours into the arts and the sciences — and both camps look down their noses at the perceived ignorance of the other. I am sure Da Vinci would not have approved of this artificial (and unproductive) dichotomy; for him painting was a science, and to see was to know.

This gulf is a profound shame, for in the study of anatomy (a subject that the Greek physician Hippocrates declared “is the foundation of medicine”) art and science have traditionally worked hand in hand. Many early texts were published in Arabic, and though highly stylised they can be seen as stunning works of art in their own right, often with hand-painted illustrations and exquisite calligraphy.

Their impact on the development of Western medicine is often forgotten. For instance, The Canon of Medicine written by Ibn Sina (known as Avicenna in the West) in the 11th century served, once translated from Arabic into Latin and Hebrew, as the chief guide to medical science in European medical schools until the mid-17th century. However, it was not until the Renaissance and particularly the work of Da Vinci, Vesalius, Estienne and Valverde that the artist became critical to the study of anatomy and the dissemination of medical knowledge. Through painting, woodcuts and sketches, artists recorded the main systems of the body, illustrated pathologies and abnormalities, and documented embryonic development.

Artist as anatomist
Sometimes the artist was the anatomist — between 1489 and 1490 and again between 1507 and 1513, Da Vinci dissected about 30 human corpses, concentrating on the form of bones and muscles as pure mechanical structures. At other times, the artist worked closely with the anatomist, being employed to provide a visual record of the dissection process and the anatomical relationships exposed by careful cuts of the scalpel; oddly enough the name of the artist is often forgotten whereas the anatomist is posthumously celebrated.

For instance, many readers may recognise the stylised illustrations from De Humani Corporis Fabrica (On the Fabric of the Human Body) published in 1543 by Andreas Vesalius, but few will be able to attribute the woodcut illustrations to Titian’s pupil Jan van Calcar — and it is the illustrations, rather than the text, for which this ground-breaking work is best remembered.

Oddly enough, Da Vinci’s spectacular anatomical studies, although recognised for their scientific and artistic merits today, made little impact on the development of modern anatomical and medical science because they were not disseminated. Da Vinci never published his anatomical works. Following his death they were largely forgotten (most ended up in the English Royal Collection by 1690) and it was not until 1900 that they were finally made widely available — though it is interesting to speculate that his sketches may have crept into the Ottoman and Arabic world before they were widespread in the West.

Had they been published earlier, they would have revolutionised anatomical and medical study in Europe. Many of the bodily structures he depicted would not be described again for centuries (for instance, Da Vinci provides the first clear description of atherosclerosis in medical history), and instead the knowledge and relationships the artist uncovered through meticulous dissection would have to be rediscovered anew by later generations.

Today our reliance on artistic imagery is undiminished in the anatomical and medical sciences. Although the work of Vesalius, Van Calcar and their contemporaries may seem oddly quaint and stylised (with flayed and dissected bodies arrayed in dramatic living poses in front of a backdrop of classical Italian landscapes), modern medicine and medical visualisation owe an incredible debt to these early artists.

Though medical illustrators and artists use paint, ink, pencil and pixels, the tools we use to visualise the workings of the human body do not necessarily require us to dissect or dismantle to understand and illustrate anatomical structures. The introduction of computed tomo-graphy (CT) and magnetic resonance (MR) scanners has revolutionised diagnostic medicine and anatomical science (as well as finding uses in a host of other disciplines such as engineering, archaeology and palaeontology) and allows us to add the missing third dimension into anatomical imaging.

Medical diagnosis
These techniques are used routinely in medical diagnosis, but we also use them in the teaching of anatomy, evolutionary biology and even forensic facial reconstruction. Through the use of modern 3D technology we can combine realism with the production of highly aesthetic images through the use of 3D volume rendering and segmentation of 2D image slices.

With the right software we can selectively peel away the anatomical layers and systems of the human body, visualising individual organs and structures in ways that would have been impossible even a few decades ago. We can disseminate our knowledge (and these often beautiful images) to wide audiences for teaching, research or to sate pure interest. This perhaps sees a culmination in the Visible Human Project, a major United States government initiative in which CT, MR and thin cryosection images of male and female cadavers can be studied from the comfort of one’s desktop (further details can be found at www.nlm.nih.gov/research/visible/).

With the application of new 3D computerised technologies, it is often far too easy to forget how we acquired our knowledge of human anatomy and structure, whether in the sketches of Da Vinci or the digital gallery of the Visible Human Project; this knowledge was acquired from the anatomical dissection of the corporeal remains of once-living people. In many cultures dissection of the human body was banned, forcing early anatomists to obtain corpses and to work illegally.

It was only in 1482 that Pope Sixtus IV issued a Papal Bull allowing local bishops to give the bodies of executed criminals and unidentified corpses to physicians and artists for dissection, and without such an edict the anatomical work of Da Vinci, Vesalius and Van Calcar would have been impossible.

In South Africa today, individuals knowingly agree to donate their bodies for the purposes of medical training and research. With the help of these whole-body donations we train doctors, nurses, dentists and other health professionals in anatomical form and function; through dissection we allow them to understand the relationships between organs, connective tissue, the cardiovascular and nervous systems, between muscle and bone. Every South African who has ever required the services of a doctor, surgeon or dentist should be grateful for these donations. These are our “silent teachers”, and without the immense generosity of their donation any training our medical professionals receive would be greatly diminished.

Patrick Randolph-Quinney is based in the school of anatomical sciences at Wits University. He is a specialist in forensic anthropology and human identification, and is actively involved in the use of virtual anthropology and advanced imaging methods in forensic, anatomical and evolutionary studies. For more information about the Wits body donation programme go to www.wits.ac.za/academic/health/8898/anatomicalsciences.html

Hunt is on for remains of possible Mona Lisa model