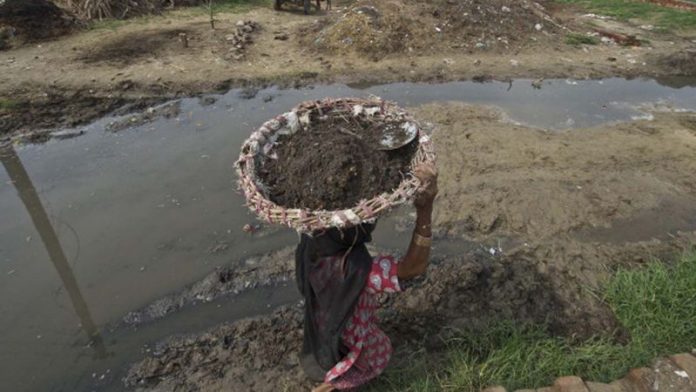 Already illegal under a largely ineffective 1993 law, the Congress-led government promised to have another go at stamping out the practice with the new legislation, which was cleared late Friday.

The new legislation modifies the 1993 law that criminalised the scavengers who clean out primitive toilets by hand, collect the faecal matter in baskets and take it away in handcarts to dump elsewhere. "This dehumanising practice (of manual scavenging) is inconsistent with the right to live with dignity," social justice minister Kumari Selja said after passage of the bill.

The measure, passed by the decision-making lower house of parliament, aims to outlaw employment of manual scavengers and provide retraining and help for their families, Selja said.

"We want to remove the stigma and blot on the society," the minister said. Selja called for a "change of mindset" to end discrimination against scavengers, who are treated as pariahs even by others at the bottom of Hinduism's hereditary caste hierarchy.

The measure prohibits construction of non-flushing toilets that must be emptied by hand and sets out a one-year jail term or a fine of up to 50 000 rupees – or both – for anyone employing a manual scavenger. It also requires authorities to monitor implementation of the law and contains tough sanctions for municipalities employing sewer cleaners without protective gear.

Workers stripped down to their underpants and equipped with just a hoe and a wooden bar can still routinely be seen clambering into the stinky depths of septic tanks and sewers. Manual scavenging points to a lack of sufficient investment in modern sewerage systems by a government that struggles to provide basic services, social activists say.

A 2011 survey by the Central Pollution Control Board showed that 160 out of nearly 8 000 towns had sewerage systems and sewage treatment plants. More than 600-million Indians lack even primitive toilet facilities and practise what is known as "open defecation" in roadways, ditches and fields.

"Sanitation is a single most important need in India," rural development minister Jairam Ramesh said last year. He raised a stir in the deeply religious country when he noted "there are more temples in the country than toilets" and that "India has a godliness surplus and cleanliness deficit". – AFP