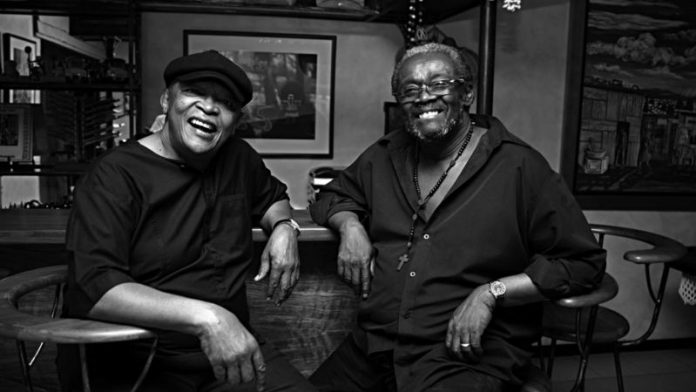 The feelings of familiarity rose from the soft cries of Hugh Masekela's flugelhorn and the timeous notes from Larry Willis's piano playing. This familiarity is undoubtedly owed to their long friendship and musical chemistry evinced on stage at the Johannesburg Arts Alive International Festival's show at Mary Fitzgerald Square in Newtown, on Saturday.

As the two played classic jazz standards into the night, Masekela's poor boy hat, wide tie and waistcoat, and Willis's retro grey suit and eyewear added even more nostalgia to their show.

With bellows so heavy, Masekela's knees buckled trying to carry the cries of his voice and horn while the crowd's enthusiasm buoyed his sound. This was matched as Willis — a native New Yorker who has played alongside jazz legends such as saxophonist Jackie McLean and vocalist Carmen McRae — did more than just carry the melody.

Despite the venue's cavernous feel that hardly provided the intimate setting this type of show deserved, the two musicians somehow managed to maintain a connection between them and the crowd.

Greeting the sea of diverse faces in the sparsely lit oversized tent, Masekela prepared the audience for a set featuring a "kaleidoscope of music" that influenced him and Willis throughout their 53-year-long friendship. With each song that followed came a comical or emotionally stirring anecdote told in the charismatic way the legendary South African musician has become famous for.

From stories of Masekela and Lewis's time spent at New York's Manhattan School of Music in the 1960s, to being introduced to each other and eventually starting a band — the award-winning trumpeter, flugelhornist and singer proudly spoke of their musical journey together.

'Golden era of music'
"We met during the golden era of music in New York," reminisced Masekela about his early years spent with Lewis jazz-club hopping in the Big Apple. Listing what they gravitated towards, he said: "We would see Count Bassie, Dinah Washington or Art Blakey and the Jazz Messengers … and always ended up at the Village Vanguard to see Miles Davis every night that he was there."

And with this long list of revered jazz greats he spoke of, Willis and Masekela played songs such as Easy Living by Billie Holiday and Clifford Brown, Fats Waller's Until the Real Thing Comes Along and Billy's Bounce by Charlie Parker.

Echoing what he said at TEDxObserver event in March last year — "Heritage is something that is beneficial to a society" — Masekela enthralled the audience with songs from his home country. Masekela was joined on stage by singer Pu2ma, the harmonising brothers from Vosloorus, in Ekurhuleni, called Complete — who provide backing vocals — and keyboardist Randall Skippers. They performed a few South African tracks such as Holilili and Abangoma, taught to Masekela by the late Miriam Makeba, who he said was "a stickler for tradition".

Egberto Gismonti and Dr L Subramaniam
Living up to the event's "South Meets South" title, which is part of the "Ten Days in September" theme as the festival takes place over 10 days across different venues in Jo'burg, the show featured acts from South India and Brazil, representing the Latin American south. The involvement of these countries at the event also forms part of the festival's tribute to the inclusion of South Africa in the Brics (Brazil, Russia, India, China and South Africa) group.

Opening the event was India's acclaimed classical violinist Dr L Subramaniam and his band, who took to the stage for an hour of Carnatic sounds. Leaving the crowd spellbound with his virtuoso technique, Subramaniam's s ounds reached a peak of frenetic yet melodic sounds that set the mood for the night.

Following Subramaniam, was one of Brazil's most skilled instrumentalist Egberto Gismonti. Showing off his background in classical piano before moving on to playing the 10- and 12-string guitar, Gismonti kicked off his set on the piano with a deep and dramatic rendition of Robert Schumann's Kinderszenen opus 15 number 7 Träumerei.

Gismonti later admitted that a technical glitch with his guitar meant he couldn't play it as he had planned to. When he was finally handed the 12-string instrument, Gismonti warmed and smoothed his set out as he played only one song before expressing dissatisfation over the sound of the guitar and the lack of silence in the tent. "This guitar is almost broken. It needs a certain silence," he said before playing what he called a "Norwegian flute" — known as a seljefloyte or an overtone flute.

Giving the audience lessons on how to play the part percussive, part wind instrument, Gismonti seemed to have forgotten about his guitar problems when he made jokes about the seljefloyte.

Before wrapping up the cool spring night, Willis and Masekela came full circle as they made newtown indeed a space for south and south to connect when they played When It's Sleepy Time Down South, made famous by trumpeter Louis Armstrong.

Before playing it, Masekela spoke warmly of Armstrong — a musician who influenced the young Hugh and sent Masekela's high school music group, the Huddleston Jazz Band, a trumpet after hearing about the band he helped set up. As the lights fell on the duo, Masekela praised renowned Satchmo’s legacy, saying: "If it weren't for Louis Armstrong, we wouldn't be here."