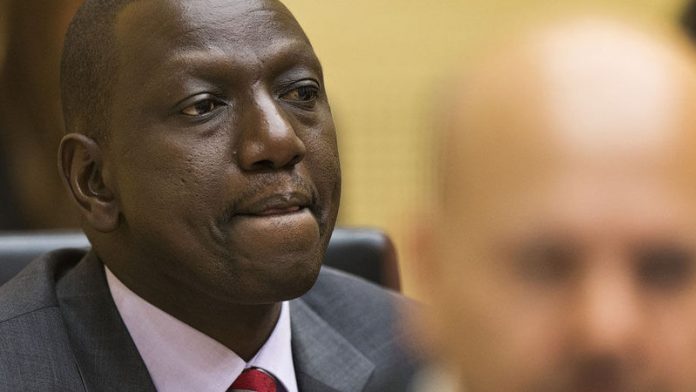 "Not guilty," both men told the judge.

Ruto came to court voluntarily from Nairobi to face charges of masterminding deadly post-election violence in Kenya, a bastion of stability in east Africa, after a tainted 2007 election.

A crowd of Kenyan MPs and other supporters welcomed Ruto and Sang as they arrived for the trial that has been painted as political by critics in Kenya.

Kenya's President Uhuru Kenyatta, a one-time political foe of Ruto's turned ally, goes on trial at the ICC on November 12. He also says he is innocent.

Ruto, dressed in a dark grey suit, gave a bemused smiled as the ICC's chief prosecutor Fatou Bensouda opened her case, while Sang, in a light grey suit, shook his head and occasionally smiled.

'Burnt alive, hacked to death'
"Mr Ruto, as a powerful politician" planned the crimes "to satisfy his thirst for political power", Bensouda told the court.

"It is difficult to imagine the suffering or terror experienced by the men, women and children who were burnt alive, hacked to death or chased from their homes," Bensouda added.

"Mr William Ruto and Mr Joshua arap Sang are most responsible for these crimes," she said.

The ICC has come under increased pressure globally, especially from the 54-nation African Union, which accused the court of targeting the continent on the basis of race and demanded the court drop the Kenyan prosecutions.

The trial also comes just days after lawmakers in Kenya became the first in the world to approve moves to withdraw recognition of the 10-year-old court that so far has only one conviction under its belt.

Any move by Kenya to leave the ICC's Rome Statute will have no effect on the current trials, but observers fear it may spark an exodus of court member states in Africa, where all the ICC's current cases are based.

Simmering ethnic tensions
Ruto and Sang each face three counts of murder, deportation and persecution after a wave of violence swept Kenya in 2007 to 2008, leaving at least 1 100 dead and more than 600 000 homeless.

Violence in those years laid bare simmering ethnic tensions. The violence was mainly directed at members of Kenya's largest Kikuyu tribe, who were perceived as supporters of then president Mwai Kibaki's Party of National Unity.

Initial attacks quickly led to reprisals, with homes torched and more people hacked to death, bringing some parts of the country to the brink of civil war.

The ICC, the world's only independent, permanent tribunal for war crimes, genocide and crimes against humanity, took charge of the cases after Nairobi failed to set up a tribunal of its own in line with agreements brokered by former UN secretary general Kofi Annan.

Ruto and Kenyatta's trials are expected to be staggered, four weeks at a time, so that both men are not away from Kenya at the same time.

The cases have been mired in accusations of witness intimidation, allegations dismissed by the defence despite several witnesses pulling out.

Ruto's lawyer Karim Khan lashed the prosecution's investigation of the violence in Kenya, calling for an independent probe into why the case was opened by the ICC in the first place.

'Speak the truth'
"How is it that somebody innocent has come before this court to face the charges against them that are patently false?" Khan asked.

He said that Ruto instructed him to implore witnesses to come to the court.

"We want witnesses to come to court … and speak the truth," saying those who did so were heroes.

More than 300 victims of the violence have been authorised to participate in the proceedings against Ruto and Sang.

There is concern in Kenya that the trials could reopen old wounds and undo reconciliation efforts by communities who once fought each other in deadly battles. – AFP