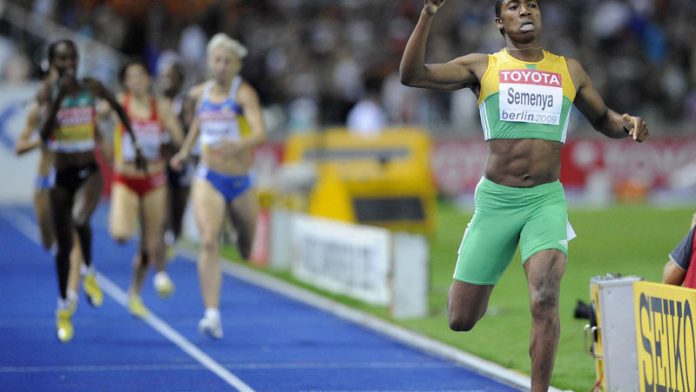 In August 2009, news that the International Association of Athletics Federations (IAAF) wanted athlete Caster Semenya to take a gender test rocked the world. Days later, she won the 800m at the (IAAF) World Championships in Berlin. She was then kept off the track for close to a year, before being cleared by the IAAF in July 2010 to compete against women.

But four years later, former Athletics South Africa (ASA) board member Laraine Lane – a member of the board suspended by the South African Sports Confederation and Olympic Committee (Sascoc) in the wake of the Semenya saga – is still seeking closure, – and she hopes to get just that when her case against Sascoc is heard in the South Gauteng High Court next week.

Lane's involvement in athletics dates back to 1976 when she began training young black athletes at the height of apartheid. She was involved in athletics for 33 years as a competitive athlete, coach, manager, adviser, mentor and selector.

But all that came to an end when Sascoc announced that she was banned from involvement in all sports under its jurisdiction.

"It means most of the meaning in my life was lost," Lane told the Mail & Guardian. "Athletics was a large and meaningful part of my life, and being banned has left a gaping hole in my life."

In an emailed interview with the Mail & Guardian, Sascoc chief executive Tubby Reddy said that Lane and the other board members were suspended for their "involvement in the haphazard manner in which the Caster Semenya saga was handled".

Consent not obtained for testing
But Lane, a psychologist, tells a different story.

"On the evening of August 6 2009, Dr Harold Adams, an IAAF medical official, asked me to provide Caster Semenya with supportive counselling. [Being an ASA board member I was reluctant but] as both he and Caster were leaving for Berlin the following day, there was no time to arrange for anyone else to see her."

But, Lane says, she was unable to counsel the athlete – who was then 18 years old – because, when she spoke to her, she realised that Adams had not obtained the required informed consent for the testing he had arranged.

"Supportive counselling would have been appropriate subsequent to the athlete being informed of the procedures involved in the medical investigation, not prior to her being advised of the tests that would be carried out."

Semenya had no idea what the tests entailed, she recalls. "She seemed totally oblivious and was incredibly excited about going to Berlin. She hadn't asked for counselling; counselling was being imposed on her.

"Before leaving, I gave Caster my gold necklace to wish her good luck. She wore it in all her races."

Sworn to secrecy
According to Lane, she and the ASA board members who did not go to Berlin were only debriefed about what had happened a month later when the team returned from Germany. "We were sworn to secrecy due to the confidentiality requirements that are obligatory in testing issues. We relied on the information we were given.

"We were informed that Dr Adams, in his capacity of IAAF medical representative, had suggested that Caster withdraw from the 800m despite his inability to proffer any medical results that supported this course of action. Dr Adams offered to bandage part of Caster's body to support the pretence that she had been injured.

"When this suggestion was relayed to Caster by the team management, she burst into tears and refused to go along with the lie."

Approached for comment this week, Dr Adams said: "I am a medical doctor. There is a confidentiality clause involved here. I cannot discuss a medical case with the media.  Caster Semenya must now rest. Leave her alone."

Disciplinary enquiry
In October of the same year, Lane's report about her meeting with Semenya was presented to the Semenya task team, chaired by Winnie Madikizela-Mandela, who stated in front of the task team members and the ASA board that Lane "had acted appropriately".

Lane also sent the report to Sascoc president Gideon Sam, who sent her a text message thanking her for her "thought-provoking input".

At Sam's request, she appeared before the Collins commission of inquiry, a Sascoc board committee, and presented the same report.

"Advocate Michael Collins and the other members of his commission assured me that I had done nothing wrong. My testimony was recorded."

However, in November she received a letter detailing her suspension, "pending the outcome of a disciplinary enquiry on the charge of bringing ASA, the sport of athletics, Sascoc and sport in [sic] disrepute".

Lane says she resigned from ASA shortly afterwards because she did not support the decision of her fellow board members to pursue a legal challenge of Sascoc's suspension.

Character assassination
In January 2010, Sascoc advised her in a letter that Collins would be conducting her inquiry in the first quarter of the year.

"Sascoc ignored my letter of resignation a week later and sent me an official letter on January 20 2010, stating that my disciplinary hearing would take place in the first quarter of that year. That was the last I heard from them. In addition to being suspended, former ASA board members were subjected to ongoing character assassinations in the media."

Lane says she sent Sascoc letters by post and by email every month to ask for updates but never received a response. "I communicated directly with Mr Sam for almost a year. I even posted two long communications on Tubby Reddy's website asking for a disciplinary hearing. They are still there." In desperation, she approached the Human Rights Commission and the public protector's office, which attempted unsuccessfully to act on her behalf.

She adds that, after two years of communication with representatives of the department of sport and recreation, she was told that, if the government interfered in Sascoc affairs, Sascoc would be suspended by the International Olympics Committee and she was advised to try other channels, failing which she should go to court.

Reddy contends that "the situation is quite simple. She would need to be subjected to the disciplinary hearing process in order to clear her name before she rejoins ASA or any other sport under the jurisdiction of Sascoc."

He also says that Lane did not communicate directly with Sascoc.

David and Goliath
But Lane asks why this was not said to her. "Sascoc admits in court documents that its officials ignored my communications. Should they have advised me of this option, I would have stood for a position in the ASA elections. It would have afforded me the opportunity to face a disciplinary hearing and clear my name."

She feels like David going up against Goliath in court, she admits, but she has been advised by her legal team that she has a very strong case.

"They have all the power and money; I'm semi-retired, my husband is retired; we can't afford this kind of action. But I tried everything possible to settle this in a reasonable manner and I want to clear my name because I have been defamed in many ways.

"If successful, I hope my case will provide a voice and encouragement for other invisible athletes, individuals and administrators who have been marginalised by Sascoc."