Irvin Jim’s fervour is lost on the alliance 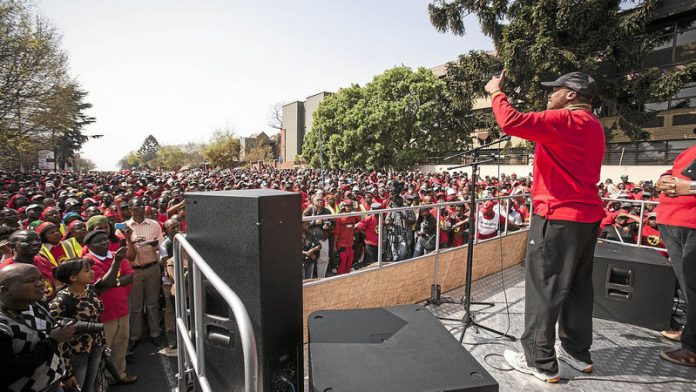 Are you missing the loud invective one Julius Malema once produced from within the ruling ANC alliance? Look no further than Irvin Jim. The general secretary of the National Union of Metalworkers of South Africa (Numsa) has been on a roll of late.

"We say voetsek to super-exploitation of workers," he said in an address at a march in Johannesburg as petrol attendants embarked on a strike earlier this week.

"We want to tell [ANC secretary general Gwede] Mantashe that we are watching his poisonous tongue," he had fumed before that, over the ongoing battle with the ANC and others over the ousting of Cosatu general secretary Zwelinzima Vavi.

Jim's knack for mouthing off is nothing new. "The problem with you is you listen with your mouth!" he snapped at the Democratic Alliance's Lindiwe Mazibuko during the youth wage subsidy debate last year.

Is Jim stepping into the gap left by the emasculated ANC Youth League?

"People like Malema have been presented as the left but they have never been that," said the  labour and political analyst Professor Steven Friedman. "Irvin Jim is the left. He's not doing this to create some rhetoric to get something. It is the political tradition he was brought up in and one that he believes in."

Suspicious of government
And it is that tradition that helps to explain Jim and the organisation he leads: independent, stubbornly suspicious of government and committed to a grass-roots socialism that puts members first and denounces others from the left who are seemingly co-opted by the ruling party – such as South African Communist Party (SACP) deputy general secretary Jeremy Cronin, who was forced to justify the state's contentious e-toll policy as deputy transport minister, even though his party opposed it.

The past few months have seen Numsa come to the fore as its old rival in the federation, the National Union of Mineworkers (NUM), has faced a crisis of legitimacy, particularly in the platinum belt, which culminated in the Marikana massacre and saw it haemorrhaging thousands of members to its rival, the Association of Mineworkers and Construction Union.

In the aftermath, the NUM has tumbled from its position as Cosatu's biggest affiliate to be replaced by a growing Numsa – its ideological nemesis in many ways.

To compare the two is to understand the clash that is threatening to divide Cosatu, the country's biggest trade union federation and a power player in South African politics.

Historically, there are two traditions in Cosatu and its affiliates. The first is an independent unionism that prefers independence from political parties and a focus on members. Think Vavi's refusal to be drawn into national politics.

Numsa, which was amalgamated from five other unions in 1987, stems from this workerist tradition, albeit one that saw unions reluctantly align themselves with the ANC and its predecessor, the United Democratic Front, at the behest of members although it maintains a healthy suspicion of politics.

Definitive account
The NUM, however, and the SACP are influenced by a heterodox Marxism, which seeks top-down change by aligning with political players such as the ANC and trying to change the political agenda. But theirs is a dangerous game that risks losing touch with members and being essentially co-opted by those at the top.

"This is the crucial difference between the NUM and Numsa," said Professor Kally Forrest, who has written the definitive account of Numsa's early years. About Marikana she says: "[The] NUM was substantially a partner of Lonmin, partnering over what to do with 'those' dissident workers over the hill. Numsa has never been in that position."

Instead, Numsa focuses on workers, almost to a fault. They will use their right to strike and will not be seduced by corporates and government.

Friedman talks about "patterns … and memories" of Numsa's past influencing the present.

Unlike the NUM, which could walk into a big mine and recruit 50000 workers in one go, Numsa had its work cut out for it in those early days.

"Numsa has thousands of small workplaces, which means organisers used to go from factory to factory to set up shop stewards and train them," said Forrest.

That tradition, which labour historian Jeremy Baskin described as "very dynamic, vibrant, militant and innovative", has left its fingerprints on the organisation.

Co-option
But that DNA is weakening, according to some.

"It has retained some of its original flavour to this day, although, like all Cosatu unions, it is a shadow of its former self," said Baskin.

Conservative analyst Loane Sharp, who is a labour economist at Adcorp Holding and a known opponent of the union movement, was more scathing.

"Numsa has attended to national politics at the expense of its members," he said. "It has thrown its hat into the ring in support of Vavi and probably made a big mistake."

But there is a larger threat.

"Worldwide there is a trend towards declining membership in unions," said Sharp. "Young people prefer to engage with their employers directly rather than through trade unions."

Like many other unions, Numsa's future may well be uncertain. This has been in part thanks to the very thing it fought against: co-option.

Corporates and government
Numsa and other unions became less powerful after 1994 because it lost leaders to various government structures, Forrest said.

"The ANC came back [from exile] and had no idea what was happening; they needed so many leaders," she said. Indeed, the brain drain to corporates and government is listed on its website as one of the biggest threats to Numsa.

But Forrest, at least, is holding out hope for the union. "Numsa was less powerful in the Nineties but I have watched it become more powerful over the years."

But she issued a warning: "The more established you are as a union the more government will want to seduce you because you are powerful."

Be seduced or be ousted? If Numsa and others were to split from Cosatu, as some believe will be the case, it may be because Jim's constant criticism of the ANC-led government will require the same action that saw Malema, Vavi and other critics silenced. And it will take with it a decades-long tradition of being close to the ground, leaving the alliance potentially substantially poorer.