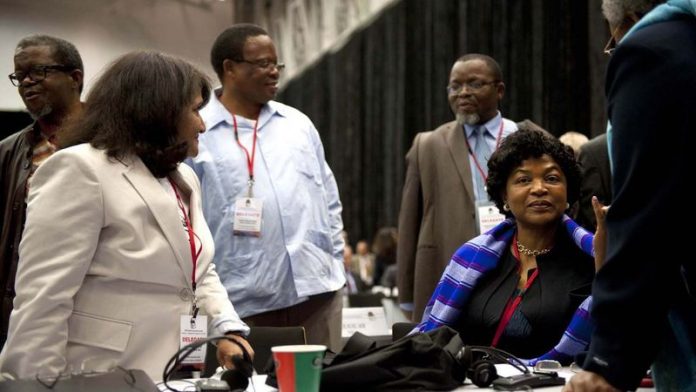 In October 2010, Jerome Brauns and Brian Mosehla sat down to haggle.

Brauns, an advocate who represented Jacob Zuma in his 2005 rape trial, was there for Gold Fields, a mining company desperately trying to lock up a new empowerment deal. It needed to close this deal to comply with the conditions for a new-order mining licence at its South Deep gold mine.

Mosehla, as Brauns was quoted in an interview with investigators, was there as ANC chairperson Baleka Mbete's "cat's-paw" – her representative.

Brauns and Mosehla's point of "heated" debate was Mbete's R2.2-million stake in the new empowerment consortium, Invictus Gold. This stake was not good enough, and Mosehla "urged" Brauns to give Mbete more.

And so it came to pass that Mbete walked away with a lot more: an empowerment stake worth R28.6-million.

What was alarming for investigators was Brauns's "confident, detailed and thorough" testimony "that Mosehla threatened to scuttle the deal unless Mbete was given a greater share".

Brauns has since denied this account and Mosehla denied making any threats.

Assurances
Paul Weiss also interviewed Mosehla and several key witnesses in addition to having access to Gold Fields's own paperwork.

They did not interview Mbete, whom they said had "not made herself available", despite "assurances" that she would.

Mbete did not respond to requests for comment for this article.

The investigators drafted a 100-slide summary, which was given to Gold Fields directors last month. AmaBhungane has seen these slides. The investigators quoted Brauns at length: "Mosehla threatened to bring the deal down and create mayhem unless Mbete was given more."

Brauns appears to have consulted with Gold Fields on this: "When I hear that you are being sent by the chair of the ANC to achieve a certain objective, you do begin to think that you need, in order to save the deal, to do what [Gold Fields executive vice-president: general counsel Michael] Fleischer says and go negotiate with the fellow.

"There were a number of heated debates between me and Brian. At some point I alerted Gold Fields that Mosehla might scuttle this whole deal. I decided, as a compromise, to give Mbete a bigger stake."

Cryptic
Shortly after the meeting, Brauns sent a "cryptic" email to Fleischer stating without reasons the proposed change to Mbete's share. This was subsequently increased thirteenfold while Brauns' and others' stakes were correspondingly reduced.

Quite how Mbete might have influenced a mining licence was not stated. The investigators pressed Brauns on this. He said: "There are lots of ways if you have the power and ­influence to do so. When powerful names like Baleka are being thrown at you, you realise this deal is not yet set in stone.

"If you are as politically connected as she is, she would command a great deal of respect and attention and would be in a position to put pressure on a lot of people. That is the reality of the matter. I had to tread with chameleonic care to deliver on behalf of Gold Fields."

According to Paul Weiss, Mosehla confirmed his meeting with Brauns and his role as Mbete's representative. Mosehla also "acknowledged urging Brauns to give Mbete a bigger stake" – but he denied making any threats.

Meanwhile, according to the slides, Gold Fields chief executive Nick Holland and the company attorney, Fleischer, corroborated Brauns's claim that Mosehla had threatened to "scuttle" the deal but that the threat related to Mosehla's own shares, not Mbete's.

Holland and Fleischer declined to comment for this article.

Paul Weiss recounted Holland and Fleischer's version that "Mosehla made a threat that applied only to his demand for shares for himself. [He] separately asked for Mbete's increase but made no threats". Mbete's shares were increased on "merit", not in response to threats, they said.

Rearrangements
But Paul Weiss argued this "makes no sense". It was "not credible to attempt to separate a threat to back Mosehla's demand for more shares for himself from his later demand, in the same meeting, for more shares for Mbete, whom he represented".

Weighing their evidence, the investigators reported: "On balance, we do not credit Mosehla's denial that he made a threat.

"Brauns's testimony to us is consistent with documents and events. [It] plausibly explains the cryptic nature of the October 18 email to Fleischer, which makes no mention of Mosehla or reasons for reallocation [to Mbete]; the enormous last minute rearrangement of the consortium – no other credible explanation has been offered; the willingness of Brauns and others to surrender large numbers of their own valuable shares; and failure to disclose rearrangements to [Gold Fields'] black economic empowerment subcommittee of board."

Paul Weiss also rejected arguments by Holland and Fleischer that threats would have been futile because the deal "was effectively final" by October 2010.

According to the investigators: "Documents show that the new-order mining right was provisional. The licence itself says it may be 'cancelled or suspended' if Gold Fields fails to carry out its undertaking to engage in the BEE deal."

And the day after the Brauns-Mosehla meeting, email correspondence suggested the government's position on Invictus had not been finalised. For example, Fleischer wrote to the department that: "We have been advised that the director general wants Gold Fields to present the structure of the BEE transaction as a matter of urgency."

Assuming that Mbete would deny using an intermediary to threaten the deal, Paul Weiss said: "Under the [United States] Foreign Corrupt Practices Act, what counts is [Holland and Fleischer's] belief and intent to make corrupt payments, not whether [Mbete] acted improperly."

Their conclusion was that Gold Fields gave Mbete the extra shares in the belief that this would avoid her "scuttling" the deal, an alleged action which "violated" the Act's anti-bribery provisions, among other potential infringements.

Mosehla said: "There is no truth in any suggestion that I either had the power to 'scupper the deal' or 'threatened' to do so. I do not have and never have had any stake in Gold Fields and was not part of the consortium."