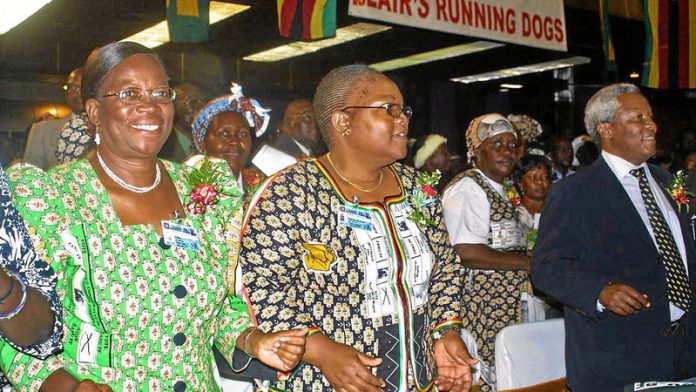 Vice-President Joice Mujuru's faction emerged as the biggest winner in President Robert Mugabe's Cabinet appointments on Tuesday after it scooped up key posts, placing the faction ahead in the race to assume power should Mugabe vacate office.

Zanu-PF has two main factions, one led by Mujuru and the other by Justice, Legal and Parliamentary Affairs Minister Emmerson Mnangagwa, though both publicly deny this.

Although Mugabe, who is 89, has announced his intention of completing his seventh term of office, most party officials believe he does not have the stamina to finish the new five-year term because of his advanced age and failing health.

To protect its electoral gains, Zanu-PF insisted on a clause in the new Constitution that, in the event of the death or incapacitation of a sitting president, the party the president belongs to will choose a successor who will complete the term.

Mujuru's key ally, Simon Khaya Moyo, the national chair of Zanu-PF who orchestrated the removal of provincial executives reportedly aligned to Mnangagwa ahead of the polls, was appointed a senior minister of state, but without a portfolio, a position once held by the late Joshua Nkomo before his elevation to the position of vice-president.

The senior minister position is widely regarded as a waiting post for the vice-presidency, for which Moyo has emerged as a favourite.

Taking another critical position
Another key member of Mujuru's faction, Sydney Sekeramayi, was appointed defence minister, which is a critical position in Zimbabwe, where the army does not shy away from politics.

Mujuru, Sekeramayi, Moyo and other members of the faction hugged and celebrated at State House after the letters of appointments were handed out.

Mugabe also appointed three ministers of state who do not sit in Cabinet. Flora Buka (presidential affairs) and Sylvester Nguni (vice-president's office) are in Mujuru's faction.

Josiah Hungwe, a key Mnangagwa ally, was appointed minister of state for liaising on psycho­motor activities in education.

Bouncing back
Obert Mpofu was moved from the mines ministry to transport and infrastructural development after an outcry from the public over the manner in which diamond revenue was being handled.

Oppah Muchinguri bounced back into Cabinet as the minister of women's affairs, gender and community development.

Saviour Kasukuwere, who was ­previously in the Mujuru faction but moved to the Mnangagwa faction after clashes with the vice-president over the indigenisation programme, was moved from the indigeni­sation and economic empowerment ­ministry to the environment, water and climate ministry — a move that has been interpreted as a demotion.

The appointments resulted in the Mujuru faction further consolidating its grip in Zanu-PF.

Mujuru, Moyo and Mutasa are part of the presidium together with Mugabe and are in charge of the day-to-day running of the party.

Their influence could be crucial ahead of the Zanu-PF ­congress, which Mugabe wants brought forward to this year to choose new leaders.

"It appears the Mnangagwa faction has been shut out from the pivotal ministries. For Mnangagwa, being moved from the defence ministry to justice was a significant blow, though the justice ministry is quite important.

"Indigenisation is critical to Zanu-PF, which based its campaign on the programme, so the removal of Kasukuwere from that ministry is quite symbolic," he said.

"It seems the Mujuru faction used its strategic positions in the party and state to have some influence on the Cabinet. Mujuru and Khaya Moyo, who is considered a moderate, used their influence to ensure that their people get positions."

What is the proper way for young Zimbabweans to remember Robert Mugabe's legacy?
Read more
Advertising