All Blacks say performance ‘best we have produced’ 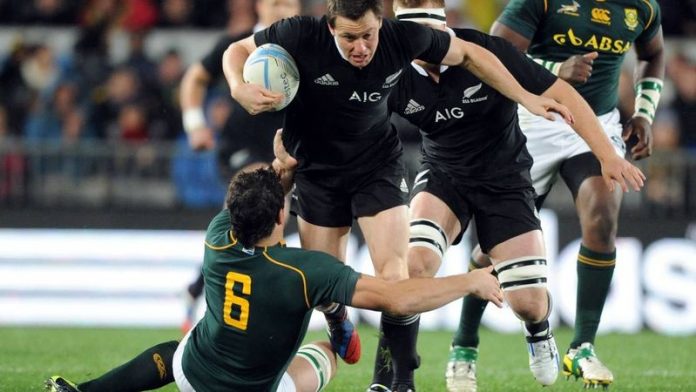 Fight fire with fire, then smoke them on the outside.

The All Blacks win at Eden Park on Saturday was blighted by a controversial red card to abrasive Springboks hooker Bismarck du Plessis after he had been given two yellow cards.

The first card for a tackle on New Zealand flyhalf Daniel Carter that has ruled the pivot out for six weeks with a shoulder injury was considered by many to have been unjustly awarded by referee Romain Poite.

The second, for an elbow into the throat of Liam Messam was considered to be deserved, and Du Plessis should have known he was treading a thin line after his earlier time in the sinbin, All Blacks coach Steve Hansen said on Sunday.

"Bismarck will be disappointed, the first one was probably not a yellow but he knew he had already been yellow carded and what he did the second time was dumb," Hansen said. "You can't elbow someone in the throat."

Du Plessis' all-out aggressive attitude typified the nature of the game. No quarter was asked, or given, and both sides flung themselves into their opponents with zealous intensity.

It was an area the Springboks, because of their size, physicality and the relative inexperience of All Blacks openside flanker Sam Cane and hooker Dane Coles, were thought to hold an advantage.

The All Blacks, however, refused to back down, countering the Springboks' wave after wave of attacks from the likes of Willem Alberts, Duane Vermeulen and Eben Etzebeth and then turning the tide with quick ball that stretched the South Africans wide.

"Certainly the intensity of the Test match was the highest we have had this year and I think our performance was the best we have produced," All Blacks captain Kieran Read said.

"The Boks play physically and our tight five really stepped up and got us on the front foot … no-one was going to give an inch … [and] we certainly didn't take a step back."

Hansen and centre Conrad Smith said that attitude of matching their intensity had been spoken about all week, with the side reminded the Springboks were on a nine-match winning streak and the game was likely to be the most important in New Zealand since the 2011 World Cup final.

"Both teams knew what we were in for," Smith said. Both were quietly confident heading into the game. "Both teams back their physicality and that was the way it turned out."

It was that attitude that allowed the All Blacks to refuse to buckle, to soak up the pressure the Springboks were able to exert and to pounce with their fast-paced game punching holes out wide, where the dynamic Read in particular was prolific.

The ability to put players into space allowed the All Blacks to create mismatches and momentum while greater care of the ball allowed them to generate quick phase ball when on attack.

"What we delivered on the scoreboard was pretty impressive," Smith said.

"I think we have played more clinically and accurately in the time since the World Cup but in terms of a pure result against a quality side it was probably our best." – Reuters