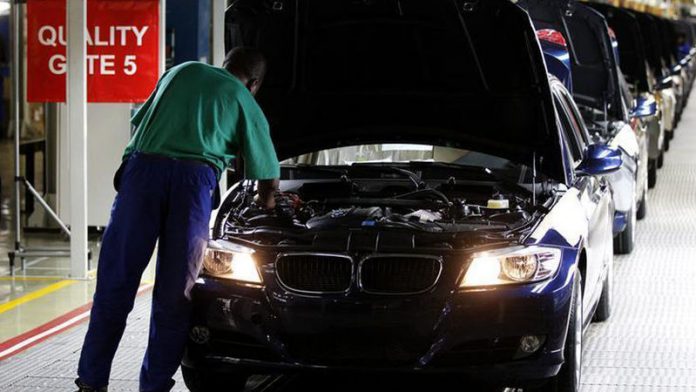 South African car manufacturers are struggling to build vehicles because a strike in components manufacturing has choked off the supply of parts, industry officials said on Wednesday, adding to the woes of a sector badly hit by earlier labour unrest.

More than 30 000 workers at major manufacturers, including Ford, Nissan and General Motors, returned to work this month after a strike for higher wages that cost the industry $2-billion (R19.7-billion) in lost output revenue over four weeks.

But workers in the automotive parts and retail industry represented by the National Union of Metalworkers of South Africa (Numsa) are on strike, shutting down the supply of key parts and components used to assemble cars. The industry accounts for 6% of gross domestic product (GDP) in Africa's largest economy and 12% of its exports.

"The impact has been huge, massive. We are only producing 85 cars instead of the normal 345 cars a day," said BMW spokesperson Guy Kilfoil.

The BMW plant would not be able to make up the lost production, he said. It lost 7 900 vehicles from the autoworkers' strike and expects to lose another 2 300 by the end of this week because of the shortage of parts.

Numsa has been pushing for double-digit wage hikes and better shift allowances, demands the Retail Motor Industry Organisation has said it would struggle to meet.

The situation was similar at a plant producing Daimler AG's Mercedes-Benz line.

"We haven't been producing our passenger vehicle line since last week. Our commercial line for trucks and buses has been going, but could stop producing next week if the strike continues," spokesperson Lynette Skriker said.

Shorter and sweeter
Most of the plant's 2 500 workers have been at home on short time owing to the parts shortage, she added.

Apart from the auto sector, strikes in South Africa this year have been relatively short-lived and less violent than some analysts had feared. South Africa's economy is recovering from a wave of violent mines strikes last year.

Workers in the gold industry went back to work this month after a three-day strike, although wage settlements are likely to cost bullion producers an extra $150-million over the next 12 months.

It is unclear if the Association of Mineworkers and Construction Union (Amcu), which is still pressing for wage hikes, intends to strike.

Amcu helped organise a wave of wildcat strikes last year that brought the mining industry to a standstill and dented investor confidence. More than 50 people were killed during the mines unrest, including 44 at Marikana. – Reuters