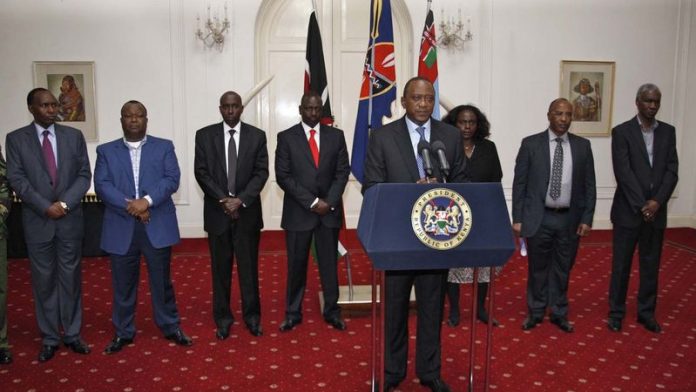 Police tape now blocks what was one of Nairobi's busiest roads. The flower- ­sellers are gone, so too are the furniture-makers and the gangs of hawkers who usually ­surround the cars of the wealthy as they drive into their favourite shopping centre.

Westgate mall is now a crime scene. Inside its collapsed arcade, police and soldiers, morgue workers and FBI agents work to catalogue an unknown number of bodies. As investigators sift through the wreckage of the worst terror attack to hit Kenya since the embassy bombings in 1998, the death toll was expected to climb to more than 120.

The end of the bloody attack on the capital's showpiece consumer plaza was declared on Tuesday in an emotional speech by Kenya's President Uhuru Kenyatta.

Read more:
Terror in Kenya: The 'White Widow' and the SA link
Somalians fearful of reprisal in SA
Morgues in Nairobi prepare for an influx of bodies

His words were given additional resonance by the fact that his own family was among those in mourning. Kenyatta's nephew and his fiancée were killed when militants from al-Shabab, a Somali Islamist group, stormed the Westgate shopping centre on September 21. The leader's son and sister were also inside when the shooting began, but they managed to escape with their bodyguards.

While his country suffered a harrowing week, it was a transformational moment for a president, who won the election despite the shadow of an indictment for crimes against humanity at the International Criminal Court (ICC).

After falling victim to a terrifying assault in which heavily armed militants loyal to al-Shabab stormed into a four-storey building packed with 1000 weekend shoppers, the country has been united. The outpouring of goodwill towards Kenya and its government has been global.

People from at least 10 different nations were counted among the dead – a number that may still rise as the wreckage of the mall, part of which collapsed after being damaged by explosions and fire, is cleared.

Kenyatta, who stands accused of masterminding some of the violence that swept Kenya five years ago in the wake of a contested election, has taken the chance to recast himself as a unifier.

After an attack in which gunmen sorted Muslims from non-Muslims even as they shot dead young children, the president told Kenyans that they "must live in a diverse, tolerant society".

But his words betrayed the fact that he was looking beyond the immediate tragedy to the beginning of his own trial at The Hague in November. "Let no one among us ever be blamed for dividing our people," he said.

As well as ordinary Kenyans, he was speaking to the ICC judges. The president's deputy, William Ruto, who had been in the Netherlands for the early phase of a related trial, was granted an adjournment by the ICC this week after saying that he was needed at home. Kenyatta signalled his post-crisis intentions towards the ICC when his lawyers followed Ruto's and appealed for an adjournment to his trial, which was due to commence in November. The request was denied.

The Hague tribunal remains a vast legal machine. Its trials cannot be stopped by one event, however traumatic it is. The court and its bureaucracy know that its credibility is at stake in the Kenya cases, the first to feature an acting head of state.

Kenyatta can, however, throw a spanner into the works by declining to attend the hearings. A previous request for him to follow proceedings by video link was only narrowly denied.

A gradual disengagement from the trial would put the onus on the United Nations Security Council to enforce Kenya's co-operation. The permanent members would likely face a noisy pan-African coalition opposing any sanctions. The African Union is scheduled to hold an emergency summit on Kenya and the ICC in the middle of October. With feelings running high after the Westgate attack, there could be wholesale withdrawals by African nations from the Rome Statute, which created the international tribunal.

Even the court's supporters among Western governments may now make the calculation that Kenya's importance in the fight against Islamist terror groups outweighs the importance of holding its political elite to account for past crimes.

This week's elaborately planned strike by al-Shabab was apparently in revenge for Kenyan forces' involvement in southern Somalia, where they seized the strategically important port city of Kismayo from the Islamists last year.

The killing spree at the mall has propped up the government's shaky standing at home. The onslaught has temporarily dissolved deep ethnic divisions present during elections earlier this year.

On Monday, Kenyatta took the same platform as his election rival from earlier in the year, Raila Odinga, to preach peace and unity. It was almost possible to forget that the two men fought each other in a cynical and divisive campaign dominated by tribalism back in March.

The four-day siege as security forces battled militants has showcased much of what is best about Kenyans as they responded admirably to the crisis. Hours-long queues snaked around city blocks as people waited to donate blood. People brought food and drinks to an emergency triage centre where wounded soldiers and freed hostages were treated, and others volunteered to counsel survivors.  Kenya's lively social media has been awash with the Twitter hashtag "we are one". The mantra has been picked up and repeated across patriotic broadcasters and newspapers.

An attempt to excuse the casualties in the attack by an al-Shabab spokesperson, who said only "the one percent of the one percent" were able to shop at Westgate, has won little sympathy.

The fact that many of the victims were expatriate workers, foreign diplomats and members of Kenya's business and political elite has not appeared to dilute popular sympathy or outrage.

The barbarity of the attacks, which blended the horror of American shooting sprees with the suicide bombings that blight neighbouring Somalia, overrode social barriers.

There is, however, much talk of revenge among some communities in Kenya, and the nearly one million Somalis who live in the country will be the most likely target.

In Eastleigh, known to many as "Little Mogadishu" because it is home to hundreds of thousands of Somalis living in Nairobi, there is anger at the attack and concern over possible repercussions.

Ahmed Adan Hefoy, a Kenyan Somali, said: "We are all condemning what's happened, we share the pain of fellow Kenyans."

The young businessman was beaten and arrested by police last year in the wake of a bomb attack on a minibus in Eastleigh in which 25 people died. Kenyan authorities responded to the attack, also blamed on al-Shabab, by rounding up ethnic Somalis, almost at random. After four court appearances and days in prison, Hefoy was released and all charges against him were dropped. He is worried that the government will indulge in the same collective punishment again.

"Some will think that all Somalis are the same," he said. "But we had no hand in this and condemn this Westgate attack."