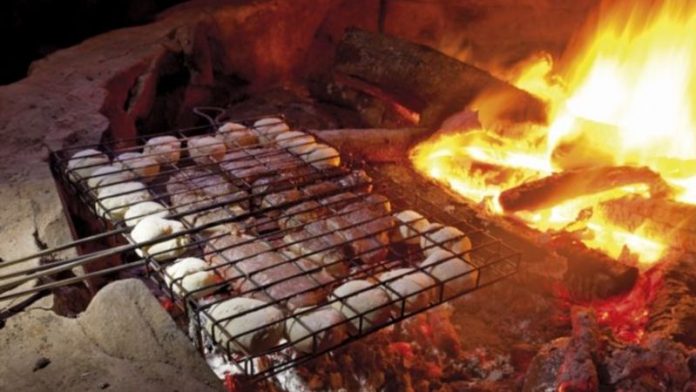 If you rolled down your window as you drove into Bryanston’s upmarket Nicolway shopping centre on Tuesday September 24, you might have caught whiffs of crackling charcoal and the sizzling fat of boerewors and chops in nearby leafy gardens.

It was Heritage Day after all — a day that, since 2007, has been rebranded by some vocal interest groups as National Braai Day.

And, though the notion of replacing what was once Shaka Day with the symbol of chops on a grill is abhorrent to some, it has clearly been embraced by some retailers.

One step into Woolworths’s flagship store in the centre was proof of this. The entire space was a monument to all things braai.

As you walked into the main entrance, you were greeted with a promo stand cluttered with prego sauce, relish, braai tongs, basting brushes, maize meal, firewood and charcoal.

The in-store promo was an integrated follow-up to the retailer’s major advertising blitz in the weekend newspapers, including adverts, wraparounds and inserts.

Braai meat
“Today, people are buying for the purpose of braaing,” said the butcher on duty. “Yesterday, they bought braai meat but mixed it with other things, like the darker meats. Today, it was braai meat.”

Meat sales had spiked significantly over the previous two days. “It’s a lot more than usual, maybe even 60%,” he said.

She said Woolworths had chosen Heritage Day to launch a new brand of marinated meat, named — somewhat ironically — the “All American-inspired” collection.

Complementarily, the back cover of the Woolies City Press insert sported an American flag alongside the definition of the American “BBQ” and a line-up of US-inspired barbeque sauces and cuts.

But the promotion was aimed at leveraging sales, not scrutinising the cultural implications of the changing definitions around the day with the likes of the ANC’s former chief whip, Mathole Motshekga, who said: “The government is trying to give people the space to define for themselves who they are … It will … be a sad day if braaing … becomes more important than celebrating our heritage.”

Steak sales a spike
Ngobeni’s comment, on the other hand, was that steak sales had seen a spike. “The butchery’s been very busy today,” she noted.

In the same centre, promotions in the large Checkers store were present, but much more subdued. A few branded posters hanging in the entrance invited South Africans to “braai with the best”.

“National Braai Day serves as an opportunity for us to showcase our speciality meat offer and to this end we have an extensive promotional offer involving print and TV advertising around Heritage Day.”

The group experienced a “significant spike in meat sales” on September 24, said Shoprite.

Nearby, Pick n Pay’s vast flagship store just off Republic Road bore no obvious in-store displays. But the retailer had picked up its above-the-line advertising: the Star newspaper carried a full-colour promo the day before the holiday.

The shop’s Braaimaster wors and lamb chops had seen the biggest sales increase, according to Nonkosi Dolonga, who worked at the butchery on Heritage Day.

“On the day it was very busy. We probably sold about 29% more than usual.”

The surge in sales was the fulfilment of an observation made in July’s Supermarket & Retailer publication.

“Retailers have realised that they could miss out majorly if they don’t gear up for this new trend,” said the publication’s Michel Mack.

Great contrast
“This is a great contrast to previous years, when many retailers told Supermarket & Retailer that they didn’t see National Braai Day as significant enough to organise a special promotion.”

Charcoal sales reportedly pick up by over 30% on the holiday, indicating “this can potentially be another massive sales peak in the trading calendar,” said Jan Scannell, better known as Jan Braai, the convenor of the much-debated “National Braai Day”.

And just as retailers have made a conscious effort to embrace the potential additional sales in the holiday, they have seemingly all made another conscious decision: to dance rather delicately around the politically charged concept while doing so.

For all the extensive promotions obviously linking braais to Heritage Day, none of them had actually adopted the alternate name for the day.

Advertising by all retailers called the day by its formal title, while simultaneously implying that braais should — and would — be lit around the country to celebrate it.

It was a seemingly successful use of the adage “show, don’t tell”; a masterful way of cashing in on sales while avoiding the political bombshell that would accompany adopting the alternate name themselves.

While the country engaged in “talking” about reducing Heritage Day to a cooking pastime, increasing sales at the retailers quietly “showed” that many South Africans were doing just that.

COMMENT: Businesses need to focus on the training the so-called soft skills needed to respond to an ever-changing environment
Read more
Business