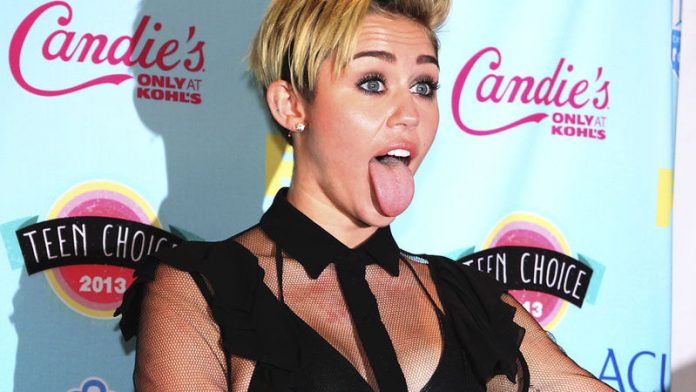 Former Disney star Miley Cyrus said she was out to shock and "make history" and is unapologetic for her raunchy performance at this year's MTV Video Music Awards.

In a documentary, Miley: The Movement, airing on MTV on October 2, the 20-year-old singer and actress comes across as a shrewd, ambitious performer determined to see her single, We Can't Stop, hit number one and put her roots as the wholesome Disney Channel star of Hannah Montana far behind her.

Cyrus refers to her performance during the August awards show with singer Robin Thicke and an oversized foam finger as a "strategic, hot mess".

The VMA show was "meant to push the boundaries", she says, adding she wanted the act to be memorable along the lines of pop star Britney Spears' kiss with Madonna at the same award show a decade ago.

"That's what you're looking to do, make history."

'I could finally be the bad bitch I really am'
Spears, who begins a two-year stint in Las Vegas in December at Planet Hollywood Resort and Casino, and other child stars faced personal struggles transitioning to adult careers. But Cyrus sees it as starting as a new artist.

"I felt like I could finally be the bad bitch I really am," she says in the documentary.

Cyrus's appearance – gold fingernails, tattoos and short, platinum hair – is a far cry from her days as the teenage star in Hannah Montana, which ran from 2006 to 2011.

Reinforcing her image, she posed topless for the cover of the October 12 issue of Rolling Stone and for one of various covers for her album Bangerz, out October 8. Cyrus also shed her clothes in the music video track of the song Wrecking Ball.

'Something that nobody was ready for'
The hour-long documentary was shot over about three months before and shortly after the VMAs. It follows Cyrus at home in Los Angeles with her dogs, during appearances to promote We Can't Stop, and in rehearsals.

The film touches on her childhood with her country singer father, Billy Ray Cyrus, and her mother, Tish. It also includes clips with her idol, Spears, and music collaborators, producer Mike WiLL and rapper and record producer Pharrell Williams, who was featured in Thicke's summer hit, the multimillion-selling single Blurred Lines.

"We decided to focus on the music and the professional side," is all that Dave Sirulnick, an executive vice-president at MTV and the executive producer of Cyrus's documentary, said about Hemsworth's absence.

At a preview of the film, Sirulnick said the extent of the media reaction to Cyrus's VMA performance surprised everyone.

"As she said, people had this image of her as one thing and then here she came with something that nobody was ready for or expecting," he said. – Reuters