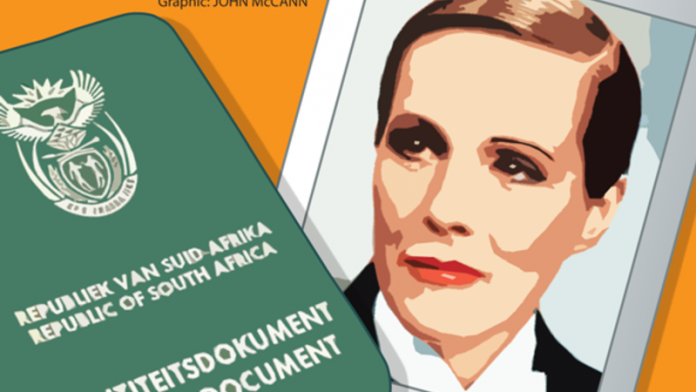 Without an ID, it's difficult or impossible to apply for jobs, access a hospital, obtain school results, open a bank account and withdraw money, obtain a driver's licence, travel, vote, or accomplish any number of other basic tasks.

South Africans who are transgender or intersex, however, are acutely aware of the constant demand for identification. People using a name or presenting themselves as a gender that is not reflected in their ID book are regularly turned away from services, subject to humiliating delay and interrogation, and are at risk of verbal or physical violence because of that perceived discrepancy.

For years, transgender and intersex activists protested against laws that made it almost impossible to change one's gender legally and have that change reflected in official documentation.

In 2003, the South African government finally recognised that these laws fostered discrimination and deprivation of basic rights and services. With the help and input of transgender and intersex activists, Parliament passed Act 49 of 2003, which specified the conditions under which South Africans might legally change their sex.

Clear guidelines
The legislation articulated clear guidelines for those who wished to change their sex, and corrected some of the most egregious human-rights violations that occurred when gender reassignment was prohibited. It included a number of safeguards designed to ensure that the human rights of transgender and intersex South Africans were protected.

Act 49 requires reports from medical practitioners in order to make the official transition, which may be burdensome, but at least it does not require genital surgery, which is often unwanted, expensive, invasive  and unnecessary. If the home affairs ministry rejects an application, it must provide written reasons for its decision and the applicant has the right to appeal.

Home affairs has committed itself to "time frames for services" including a six-week turnaround period for new identity books. There is no reason why making a decision about a new ID book for transgender or intersex people should take any longer, recognising that the delay is especially harmful when a person is waiting for something so incredibly personal and central to their identity.

All of these protections represented a very positive step forward. But now, 10 years later, transgender and intersex applicants say that the provisions of the Act are regularly ignored or violated in practice.

According to Liesl Theron, the director of Gender Dynamix, home affairs personnel have told applicants that they need to have genital surgery, undergo sterilisation, or divorce their spouse to alter their sex description.

Significant obstacles
Applicants have waited for interminable periods of one, two, or more years for news about their application and, in the meantime, they have continued to face significant obstacles to doing any of the basic tasks that require having accurate, gender-affirming identification.

When they inquire about the status of their application, applicants have encountered personnel who are unresponsive, unsure, or hostile. After waiting for months or years, individuals often find out that their applications have been summarily rejected without the written explanation required by law or any notification that there is a right to appeal.

The solution to these problems is not difficult or obscure. On the contrary, it's already prescribed by law. What transgender and intersex South Africans need is for that law to be implemented.

A first step is for home affairs to establish a method by which applications can be processed swiftly and efficiently. For something as central to a person's identity as gender reassignment, it is inexcusable that an application sits on a desk for one, two, or five years.

Applications that meet the standards prescribed by law should be fast-tracked for approval and if there are concerns about an application, applicants should be notified immediately with clear instructions on how to proceed.

Personnel training
A second step is to train home affairs personnel. As long as personnel are unfamiliar with the law and the issues that transgender and intersex South Africans face, delays and misapplications of the law are all but inevitable. Home affairs personnel should be trained to require only what is necessary by law, not to add their own requirements, second-guess reports by medical practitioners, and disrespect transgender and intersex individuals filing their applications.

The delays, shifting requirements, and inexplicable rejections that transgender and intersex activists have reported are incredibly frustrating. The silver lining is that a better framework is not hard to conceive – it's already on the books. All we need now is for home affairs to speed up the application process and put the law into practice.

Graeme Reid is the author of How to Be a Real Gay: Gay Identities in Small-Town South Africa (UKZN Press), and is director of the Lesbian, Gay, Bisexual and Transgender Rights Programme at Human Rights Watch