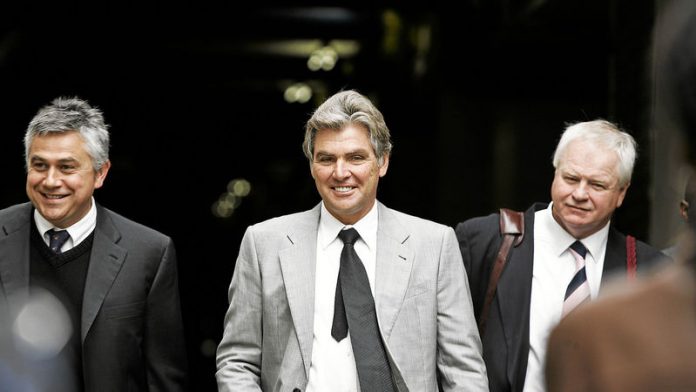 In turn, the government could increase the mandatory ethanol blend with unleaded fuel to 15% from the current 5% — something Rautenbach would benefit from.

Two senior government sources say Green Fuel, which has been lobbying for ethanol blending since 2009, recently offered to fund agriculture if the government increased fuel blending.

Green Fuel is the only company producing anhydrous ethanol, which is blended with unleaded petrol. Anhydrous ethanol is an ethyl alcohol that is free of water and has a purity of at least 99.6%.

Rautenbach’s Green Fuel has a monopoly in ethanol production, so an increase in ethanol blending would result in huge profits for the company. In Zimbabwe, it is mandatory for unleaded fuel to be blended with ethanol.

Petrol consumption rises
The country consumes an average of 1.5-million litres of petrol a day, but consumption continues to rise owing to an increase in cheap car imports, especially from Japan.

Zimbabwe relies heavily on agriculture, but in recent years has ­struggled to fund the sector ­adequately, resulting in farmers ­failing to acquire inputs on time.

New farmers ­resettled under the government’s land reform programmes can also not access bank loans to fund their agricultural activities because most only have government “offer letters” that identify them as the owners of the land. Banks refuse to recognise such letters.

An official in the ministry of agriculture said an excess of $1-billion was needed to fund the sector because there was a need to rehabilitate infrastructure at most farms.

Green Fuel has allegedly offered to chip in, but with a catch: the government would have to raise the ethanol level in fuel.

It could not be established exactly how much Green Fuel would give the government or what it could realise in profits if ethanol blending was increased to 15%.

The government chipped in with $161-million, which will benefit communal, old resettlement, small-scale and A1 farmers.

Chinamasa did not say who the private sector members who raised the $120-million were.

But in an interview this week, Arda’s chairperson Basil Nyabanza said he was not qualified to speak on behalf of Green Fuel, but confirmed that Arda and its partners, whom he did not name, wanted to play a role in funding the 2013-2014 agricultural season.

No adequate funding
“It’s clear that the treasury has no money to adequately fund agriculture and we think it’s time we move away from always relying on the government for funding. Arda and its partners are therefore trying to find resources to assist the government,” said Nyabanza.

He declined to reveal how much Arda and its partners wanted to raise, but said they would do what they could to raise as much as possible.

Energy and Power Development Minister Dzikamai Mavhaire confirmed to the M&G that an increase in ethanol levels was on the cards. He said the government would introduce 10% ethanol blending by the end of the year and 15% by the end of February before increasing to “20% and beyond as time progresses”.

To meet the new requirements, Green Fuel would have to increase its ethanol production levels.

“We are looking at the long-term benefits for the country. The fuel blending will reduce the government’s importation bill significantly, while also benefitting sugarcane farmers, thereby creating employment. It will also result in cheaper fuel being available so the public also stands to benefit,” Mavhaire said.

He said ethanol blending had been successful in many countries, including Brazil and the United States, and would therefore be beneficial to Zimbabweans.

No answer
His phone cut off, however, when asked about the Green Fuel offer to fund agriculture in return for increasing the ethanol blending level and whether government moves to increase ethanol blending had anything to do with that offer. His phone went unanswered thereafter.

The Zimbabwe Energy Regulatory Authority announced mandatory blending of fuel ethanol at the level of 5% ethanol and 95% unleaded petrol on August 15 this year.

This followed the issuing of an ethanol production (mandatory blending) licence to Green Fuel on August 5.

Despite the mandatory blending, fuel prices have not dropped but have remained pegged at between $1.49 and $1.55 a litre. E85, which contains 85% ethanol and is not mandatory, is selling for $1.10 at a few refuelling stations in Harare.

Former energy and power development minister Elton Mangoma, who refused to grant Green Fuel a license during his time in Cabinet, said the company’s licensing soon after the elections was a scandal because it would result in “an individual” benefiting at the expense of the nation.

“The issue here is that blending is a public policy issue that people should discuss openly. We should not make public policy to benefit individuals, and Green Fuel is a private individual not a public institution,” said Mangoma.

“For such a project, the shareholding and other project must be made known. It’s not about the fuel; it’s about who is benefitting and who is being disadvantaged. This deal is a scandal and illegal, that’s why I had problems with it.”

He said a lot of villagers lost their land to Green Fuel, hence the massive resistance of the project by people in Chipinge and surrounding areas.

Claris Madhuku, a representative of Chipinge villagers who lost about 2 663 hectares of land to Rautenbach’s ethanol project said tensions between villagers and the company had decreased after Green Fuel agreed to compensate 594 households who made way for the ethanol project.

On its website, Green Fuel says ethanol has a lower energy content than petrol, meaning cars running on blended fuel have a higher consumption compared to those running exclusively on unblended petrol.

The company, however, said the pricing of ethanol fuel will compensate for the higher consumption.

“Ethanol fuel blends are cheaper than 100% petrol, and savings are also achieved through various other factors, such as importation costs and carbon taxes. In ethanol, only the proportion of petrol in the blend is affected by the major price variations for raw oil,” said the company.

“The International Energy Agency has stated that biofuels, no matter if they are used individually or blended with other fuels, improve the air quality.”

Rautenbach’s spokesperson, Lilian Muungani, invited the M&G to Green Fuels farm and said she would respond to questions after the visit, however, there was not enough time to take the trip before going to print.

Rautenbach has taken many different roads to wealth
Billy Rautenbach is a controversial and wealthy Zimbabwean businessman.

Born in 1959, he has been involved in numerous business ventures ranging from trucking, car manufacturing and farming to mining in numerous African countries.

In the 1990s, he expanded his family business, Wheels of Africa (WOA), into arguably the largest trucking company in Africa, before turning to car assembly.

In the past, the Mail & Guardian reported that he ran into trouble in the 1990s and fled South Africa after the then Investigating Directorate for Serious Economic Offences launched a raid in November 1999 on WOA.

Between December 1999 and January 2000, most of the South African and Botswanan-registered companies in the WOA Group were placed under liquidation, leaving debts in excess of R1-billion in South Africa and R900-million in Botswana.

Rautenbach was sought in ­connection with fraud relating to the manipulation of import tariffs and the siphoning off of company cash to himself and others using fictitious invoices.

"Close" to Zanu-PF heavyweights
In 2009, he reached an agreement in which one of his companies pleaded guilty and tendered a R40-million fine, though he personally did not admit liability. Rautenbach is reportedly close to a number of Zanu-PF heavyweights, including Legal and Parliamentary Affairs Minister Emmerson Mnangagwa.

In 1998, he was appointed chair and managing director of Gecamines, a state-owned mining company in the Democratic Republic of Congo (DRC).

Zimbabwe sent troops to the DRC to prop up then-president Laurent Kabila. In return, various business ventures were set up to repay the country for its support.

Rautenbach was removed from this position after an audit by Ernst & Young, mainly because, as described in a later United Nations report, “some of Gecamines’s best cobalt-producing areas were ­transferred to a joint venture between Mr Rautenbach’s Ridgepoint Overseas Developments and the Central Mining Group, a Congolese company, controlled by Pierre-Victor Mpoyo, then ­minister of state”.

In 2000, the DRC withdrew Rautenbach’s mining concessions, reportedly after he failed to pay over the state’s share of the profits.

But the death of Kabila in January 2001 opened the door for Rautenbach to get back in. By April 2002, he had reached a settlement with the DRC government and had been reallocated several lucrative concessions.

He made about $50-million from the sale of his shares in the British company Camec, into which he had folded many of his DRC and Zimbabwean mining interests.

Despite massive resistance from the local community, Rautenbach managed to set up Green Fuel, an ethanol-producing company.

In 2009, Rautenbach admitted in a South African court that he gave convicted drug dealer Glenn Agliotti $100 000 to pay the former South African national police commissioner Jackie Selebi to “sort out his issues”.

In 2011, allegations surfaced through whistle-blowing site WikiLeaks that Rautenbach had told a United States ambassador that he hates January because it is when school fees are due, and many senior government officials approach him for “donations” to pay their children’s fees.