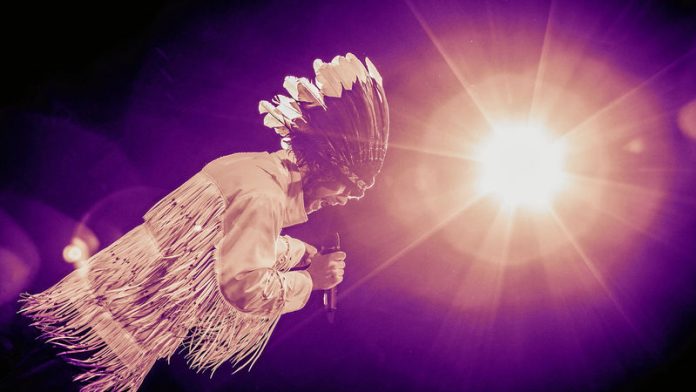 There’s a little-known story about a British journalist who, while interviewing famous jazz and cabaret singer Karen Kay in the 1970s, was constantly distracted by her hyperactive pre-teen son Jason disturbing the peace upstairs with his music.

Jason grew up to become Jay Kay, one of the most influential musicians of the past two decades and frontman for Jamiroquai, the acid jazz band that has been a global phenomenon since the early Nineties.

Ahead of his arrival in South Africa to headline the Delicious Food and Music Festival, the Mail & Guardian caught up with Jay Kay and found that, while he has mellowed out somewhat, he is still disturbing the peace in his own inimitable way.

It’s been an eventful journey between Emergency on Planet Earth and Rock Dust Light Star. How have you managed to stay relevant for over two decades?
By not worrying about staying relevant. I’ve always just done my thing and Jamiroquai never really fitted into a trendy genre or anything. Thankfully people like what we do and we love getting out there and playing live, which is a great way of connecting with fans and keeping them interested – hopefully they know they’re getting quality when they come to our shows.

You’ve always been socially conscious since We’re Too Young To Die? What events have stood out for you the most in recent times?
There have been so many since we started … wars, 9/11, climate change – the list goes on. I think back to writing Virtual Insanity and that was a very prescient song I wrote; and things like Dolly the Sheep [the first mammal to be cloned] happened right after. I think the ideas in that song are maybe even more relevant today than they were back then.

How has your writing process evolved over the years?

I think experience changed it a lot. We get together as a band and work on loads of ideas some of which I get bored with, some of which I start and don’t finish and some of which really excite me – those are the ones that get finished and make the album! Often the last thing to get finished is the lyrics. I may often go off somewhere in complete isolation to get those done.

How do you handle a creative block? It happens even to you, right?

I do get creative block sometimes and the best way is to go away and come back later – there’s no point fighting it when it happens. You just have to accept it – and realise you can’t make records to someone else’s (like a record label) schedule – you have to do to your own. I will only put out an album now when I am inspired to do so.

You’re not a fan of politicians, and have always spoken out against the politics of war. How do you feel today that there are more wars being waged by the world’s super powers?
It makes me just as angry today as ever to be honest, like the situation in Syria, but it’s complicated. It’s not as simple as going in and bombing them – that’s happened before and look at the results! I’m fascinated by history and I think the obvious thing is for governments and politicians to learn lessons from history but they just don’t seem to get it – it’s quite depressing really.

Is it difficult being a grown up after the model ­girlfriends, sports cars and cocaine?
Erm, I may be without some of those – but not all – trust me. I guess I have always had two sides to me: the side that likes to stay at home or go camping and be at one with nature and the one that likes life in the fast lane – with at least two out of three of the above!

What has been your strangest inspiration for a song?
Oh there have been lots. One that springs to mind is Virtual Insanity which was written one of the first times I visited Japan. It’s a crazy place visually. We were staying in a hotel but wanted to get out and have a wander around. We walked in the streets and it was snowing and there was nothing anywhere. It was completely deserted. Then we went down some stairs into this massive underground mall and that was where all life was – they were all living underground, hence the lyric.

Do you find it difficult to be heard in the music industry today, with contemporary music so ­overpowering?
The speed at which the media and to some extent the public consume things these days; it’s a bit insane to me. But I just don’t worry about it too much to be honest – when you’ve been around a while you see new people come and go and you can’t keep up with half of them. There are some interesting artists or bands who emerge every now and then of course but the test is whether they stick around, really stick around I mean, more than a couple of albums would be nice.

Is the music industry too ­manufactured these days, with the popularity of made-for-TV bands and shows like Idols? How do you relate to this?
Are you kidding me? Of course it’s too manufactured. It’s bollocks. It just has nothing to do with what I do and I just don’t follow it at all to be honest. People ask me about the latest thing to come off some talent show and I have absolutely no idea what they’re on about. It’s sad because I’m sure there are some talented kids out there who think that’s the only way to get noticed, but it isn’t.

A fairly Delicious treat for music lovers and foodies