Scrapping over metals goes to court 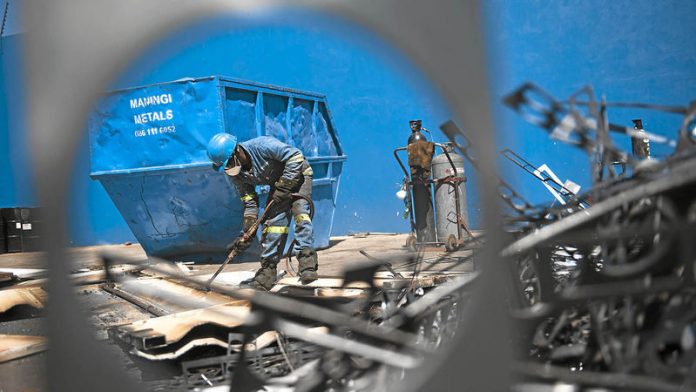 Maningi Metals's scrapyard in the Jo'burg city centre has suppliers from all walks of life.

Some companies or households will call the merchant up to collect scrap and other industrious entrepreneurs make the trip themselves with loaded bakkies.

More frequently hawkers drag their trolleys into the yard before weighing the assortment of waste on an industrial scale and collecting a hard-earned reward.

Almost 90% of the scrap brought in is metal. Street collectors of scrap, with a bit of elbow grease, can earn anything between R40 to R200 a day.

One young mother, with her child in tow, received R17 for a mountain of flattened cardboard.

She is aware she could make far more if she brought scrap metal in, and some other single moms do, but she says it is harder to find.

It is highly desired for products such as steel because it has already been beneficiated and requires a fraction of the energy to process.

This, in the government's eyes, makes it vital to South Africa's industrial development — so much so that it is at the centre of a legal battle that will play out in the Pretoria high court on October 10 to 11 this year.

On September 16, the government imposed the first new restrictions that seek to clamp down on scrap metal leaving the country.

There are a number of changes but the most contentious is that scrap merchants cannot sell products directly for export and must first offer it to local buyers at 20% less than the spot price before a permit to export it will be granted.

These restrictions for waste and scrap that do not contain iron — non-ferrous metals — are already in place and those applying to iron-containing and stainless steel (ferrous) waste and scrap took effect on September 30.

Changes
The changes were a long time coming — the debate between the government, the manufacturing industry and scrap merchants has been raging for more than a decade.

Local consumers of scrap metal claim the prices are too high and that not enough is made available to them but the scrap merchants refute this and say local buyers want to pay too little.

A source associated with the trade said the dispute is complicated by the fact that the treasury and the department of trade and industry could not see eye to eye.

The treasury told the Mail & Guardian it would not comment on internal government discussions.

But the economic development department said it has introduced the scrap metal price preference system to help halt and reverse the bleeding of jobs and the shrinkage of the scrap metal processing industry over the past few years.

"It is part of a package of measures by government designed to stabilise the industry, including an initiative to improve the industry's competitiveness and several measures to increase demand for value-added locally manufactured products," the department said in a written response.

Restrictions
The restrictions apply to all scrap but steel is the most critical as it represents about 70% of manufacturing inputs.

State intervention in the minerals sector (Sims) was endorsed by the ANC at its national conference in Mangaung last year.

According to it, steel "is by far the most important raw material in manufacturing, which is probably the only sector capable of absorbing our massive number of unemployed", and it needed to be supplied to the economy at competitive prices.

It also recommended the outright ban of all exports of scrap in a bid to foster a competitive advantage for the country.

"Many states have or had restrictions on scrap exports, including China, India and Russia. Sweden had restrictions before having to drop them when it joined the EU and many other developed countries used them in the past whilst developing."

The government has tread more lightly than what Sims recommended but the discontent over a shake-up in the scrap metals industry will not be dealt with quietly.

The MRA declined to comment on the legal proceedings, saying the matter is sub judice.

Garth Strachan, chief director of industrial policy at the department of trade and industry (dti), said: "The dti has joined as the third respondent because the issue of the unencumbered exports of scrap metal, in circumstances where other countries have either a total ban or strong export taxes, is a matter of considerable concern for the dti and it is important this policy instrument to provide support to the manufacturing sector in South Africa is protected."

While the legal matter is pending, some merchants are feeling the pinch.

Donovan Korff, a partner in Cobra Metals, which was established in 1980 — the first scrap merchant in the run-down Malvern area — sells only to local buyers.

Price changes on non-ferrous metals are evident — for example, Korff shows a price list supplied to him by the foundry: the price for aluminium dropped from R14.50 a kilogram to R12.50 recently. And the price for light steel has dropped 30c.

Immediate impact
For Korff, the impact has been almost immediate.

"We can see we are not getting material at the moment — not as much as we used to. Government looks like it wants to do price fixing forcing a 20% drop like this," he said.

"Even companies do not want to sell to you. I show them the Government Gazette but … If it carries on like it is going, we will have to close the business down and lay people off."

The director of Ferrous Metal Processors, Howard Fine, said: "We as recyclers do not yet know the full implications. It's up in the air."

But diminished margins could have a real impact. "Our industry teeters on the edge of breaking even," he said.

The concern is that it will put pressure on suppliers as scrap merchants will be paying a lower rate in line with the preferential pricing.

At risk
One type of supplier, the hawkers who sell their scraps to Fine's company each day, is particularly at risk.

Franck Engelbrecht, who operates a Maningi Metals scrapyard in Alexandra, estimates trolley hawkers can earn up to R200 a day, although it requires a great deal of effort.

"We are trying to create job opportunities. Many people rely on this sector to put dinner on the table. They are the ones who will suffer," Fine said.

Engelbrecht and Fine echo the MRA's concerns, as published in Business Day, that street collectors of scrap metal, who were paid about 10c a can until the new restrictions came into effect, will suffer most from an artificial reduction in the price paid to them for scrap metal they deliver.

Historically recyclers traded with local consumers with the price based on the international spot price but local consumers eventually could not absorb the volume generated.

Indian companies then set up shop in South Africa and began to negotiate with local suppliers and offered a "very competitive price", Fine said.

Advantages of exporting
He said there are many advantages to exporting as providing the logistics for a scrap merchant is intensive.

When selling to exporters, they take the responsibility.

"It's a capitalist society. Everybody is looking for the best deal. The manufacturer wants the best value for their product. Why should we not be entitled to the same?"

Bob Stone, who chairs the Non-ferrous Metals Industry Association and is vice-chairman of the Aluminium Federation of South Africa, said many critical products were made from scrap, ranging from mining explosives to chemicals for treating water.

Scrap used for metal casting is in high demand in India.

"Because of the NDP [National Development Plan], they need to create the jobs."

Costs are key
But the foundry industry has contracted by 40% in size, Stone said.

Markus Hannemann, chief executive of the Scaw Metals Group, said scrap costs are key for metal manufacturers and represents more than 50% of the total cost of manufacture.

"Since 2009, some 100 foundries have closed in South Africa. Instead, Scaw believes the improved availability of scrap locally should in fact witness the development of the local metals manufacturing industry."

Improved direct international competitiveness will spur the growth of secondary manufacturing of metal products in South Africa, which is vital to fuelling an efficient value-added sustainable steel industry, Hannemann said.

The department of economic development said it considered several measures to ensure that the local scrap processing industry has access to affordable scrap metal.

"[The department] decided on a price preference system as it is less trade restrictive than other options, including a ban on exports.

Benefits
"The benefits of the system will not only accrue to the local scrap metal processing industry and jobs therein but also to South Africa's infrastructure drive and downstream manufacturing sectors, including automotive manufacturing, car parts, batteries, valves, pumps, taps and many more."

"As a business organisation, we are not pro unnecessary regulation … we would have liked to have seen a negotiated agreement before government had to step in."

Bezuidenhout said there are upsides and downsides to the new restrictions and there will have to be some degree of adjustment.

"If we say manufacturing is key [as indicated in the National Development Plan and Industrial Policy Action Plan], we have to make decisions in favour of the productive sector of the economy."

Henk Langenhoven, an economist at the Steel and Engineering Industries Federation of South Africa, said the regulations are going to be beneficial to some and detrimental to others, including some manufacturers who generate scrap in their operations.

Investment has been declining substantially and the industry "is really in a bad spot", he said, but he added that there are other major issues, apart from scrap, in the economic environment affecting the industries.

Fine said other issues facing the industry have not been factored in such as a volatile labour force and antiquated equipment, which cannot compete with the technology used, and subsequent volumes produced, by other countries.

The Manufacturing Circle echoed some of these sentiments in a press release on the scrap restrictions: "The positive impact of any improvements in scrap metal supply is likely to be undermined by a range of other challenges that remain unaddressed, which include the rapid, bunched-up increases in administered prices over the past few years, the security of electricity and water supply and a labour dispensation that does not promote industrial peace and incentivises attendance rather than productivity."