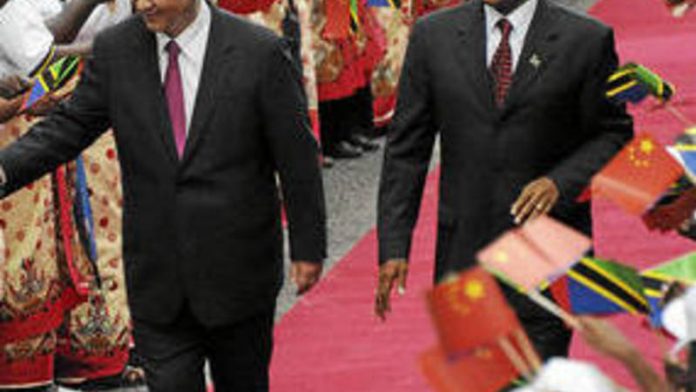 The Chinese presence in the Tanzanian economy is growing rapidly as the eastern giant intensifies its quest for natural resources and a gateway to other African states.

During a state visit to Tanzania in March this year, Chinese President Xi Jinping and President Jakaya Kikwete signed at least 19 agreements reportedly worth more than $6-billion.

According to the website Open Data for International Development (AidData), China has become Tanzania's largest single trading partner last year it accounted for 15% of Tanzania's trade, valued at $2.47-billion and its second-largest source of investment.

AidData reports that, between 2001 and 2011, mineral-rich Tanzania received $4.6-billion in Chinese funding, which has the added attraction that it does not come with the conditions about human rights and transparency demanded by some Western funders.

But many Tanzanians are concerned that their country will not be the main beneficiary of the big government-to-government deals and worry about the secrecy surrounding them.

Details are hard to uncover as the infrastructure contracts are not awarded by competitive tender and government ministries are extremely reluctant to provide information.

Parliament kept in the dark
Tanzanian MP John Mnyika complained that not even Parliament is informed.

He wrote twice to the infrastructure ministry for information, without result. A government foreign service officer, Adam Issara, refused to answer questions.

"I don't know the details of the contracts; they're between the two countries. And, anyway, why do you want to know?" Issara demanded.

An official at the Chinese embassy in Dar es Salaam, who would not give his full name, asked amaBhungane to email questions to him. This was done twice but he did not respond.

An amaBhungane investigation found that Chinese business activities in Tanzania are focused particularly on raw materials such as iron ore, coal, the gemstone tanzanite, gold, diamonds and uranium and on the infrastructure needed to transport these.

China's interest
"China is mainly interested in sectors such as roads and railways that will help it easily feed its industries," a University of Nairobi academic, Samuel Nyadema, is quoted as saying in Kenya's East African newspaper.

He said that the Chinese use project financing "as bait to secure routes to scarce natural resources".

Central to the Chinese companies, mainly state-owned, is the China Merchants Group, which is building a new port, highways and a railway line.

The major component of the deal clinched in March this year is for the construction of a port at Bagamoyo, northwest of Dar es Salaam, for $10-billion.

Funded by the state-owned Import-Export Bank of China, the facility is planned to be Africa's largest.

Framework agreement
It is scheduled for completion by 2017 and will be able to handle 20 times more cargo than Dar es Salaam.

The framework agreement between the Tanzanian government and China Merchants Holdings (International) also includes the building of a 34km road between Bagamoyo and Mlandizi, which will connect the port to Tanzania's internal rail network and the Tanzania-Zambia railway.

Tanzanian researchers believe that the port is intended partly as a gateway for Chinese operations in nearby African countries rich in minerals, water or land, such as the Democratic Republic of Congo, Burundi, Mozambique, Rwanda, Malawi, Zambia and Kenya.

However, a senior University of Dar es Salaam economics lecturer, Haji Semboja, said the principal reason for building in Bagamoyo is political.

"They are looking to win favour. They know exactly that the president comes from Bagamoyo."

Semboja said there is no compelling reason to build another port.

Kitila Mkumbo, an economist at the University of Dar es Salaam, said that, although the Chinese claim to have a long friendship with Tanzania, they are eyeing its resources.

"There's a huge competition in the world now. China wants to be the superpower and it's hungry for raw materials, particularly rare-earth elements found here," Mkumbo said.

Some analysts also say that a large component of China's efforts to establish ports and bases in the Indian Ocean is the need to formalise logistical support agreements for Chinese naval forces conducting anti-piracy operations off the Horn of Africa.

Semboja said that the Chinese are engaged in a long-range economic war.

"They are very strategic. Whatever they are doing now is intended to have benefits for the future. Increasingly, they are creating industries in Tanzania instead of sending raw materials home."

The Chinese immediately offered to build a pipeline for the government, and a $1.2-billion loan agreement for a 523km line linking Dar es Salaam and the Mtwara gas field was signed in September 5 last year between Tanzanian Finance Minister William Mgimwa and the deputy president of Exim Bank, Li Jun. The loan has a 33-year maturity and a low 2% interest rate.

The amaBhungane investigation also highlighted the Chinese use of funding to gain access to resources.

Following the conclusion of the Dar-Mtwara pipeline deal, for example, China's state-owned Sichuan Hongda Group signed a joint venture agreement with Tanzania's National Development Corporation to exploit a major iron-coal complex with a 100-year lifespan in southern Tanzania and a total value of $54.8-billion.

The fact that the Chinese have an 80% stake in Liganga Iron Ore and 70% in Mchuchuma Coal has raised eyebrows.

Matambalya complained that the Mchuchuma-Liganga venture appeared to be a payback for the pipeline deal.

Queensway operations
This form of trade-off was pioneered several years ago by an opaque Hong Kong-based company, the 88 Queensway Group, under its director, Sam Pa.

Queensway, which is officially private but said to have strong links with China's ministries of state, foreign affairs and public security, operates through two investment vehicles, China Sonangol and China International Fund.

In return, the Chinese were given the right to explore two oilfields in the Lake Rukwa basin.

The role of Chinese enterprise, both private and state-owned, is not confined to dealings between the two governments or their representatives.

It is also increasingly dominant in the general economy.

It is notable that Chinese companies occupy nearly 90% of Tanzania's engineering contracting market.

Also a source of unhappiness is the fact that Chinese companies provide employment mainly for Chinese expatriates and they have expanded into many other areas where Tanzanians could be in business or finding employment.

Matambalya complained about the balance of trade between the two countries: "The Chinese use our resources to produce products, and they import much more from China than what we export to them."

However, Semboja defended the Chinese role in the retail economy, arguing that their products were affordable for poor people.

Mnyika expressed concern about both the growing economic dominance of the Chinese and the secrecy surrounding many big deals.

He said the government needs to remove the confidentiality clause in the Constitution that hinders access to investment agreements.

Every port in the storm

China's massive commitment to the development of Tanzania's infrastructure, announced in March this year, reportedly totalled about $6-billion in grants and soft loans, but funding and other details of the individual projects are vague.

In addition to the construction of the Bagamoyo port, the website Open Data for International Development (AidData) reports that the following could be on the cards: