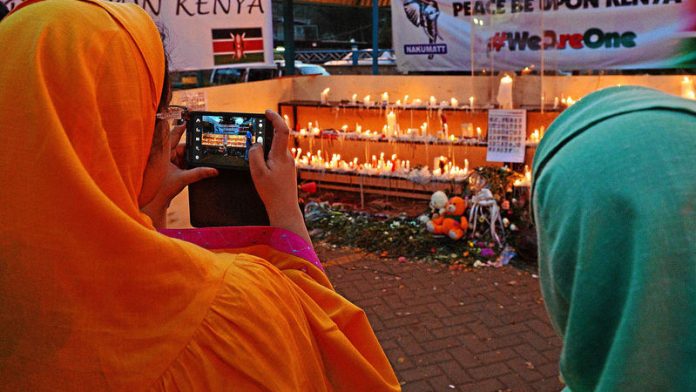 Westgate was a magnet for Kenya's moneyed classes, a mall that represented the three Cs of aspirational Nairobi: cosmopolitanism, capitalism and consumerism.

Before it became a battlefield last week, it was a playground. Its sushi restaurant had the city's finest cocktail bar, and next door, the multiplex cinema served a diet of Hollywood and Bollywood that reflected the mixed heritage of its regulars. The ground-floor Artcaffe coffee shop, with its dark wood decor, was a hangout for celebrities, politicians, diplomats and expatriates. Conversation over cappuccinos on the terrace stretched from gossip about TV stars and property deals to funding for aid projects.

In a city where a third of the population lives in overcrowded slums with no running water or electricity, the Israeli-owned mall, which opened in 2007, was a fantasyland that insulated its visitors from the reality of other, poorer people's lives.

Even the drumbeat of security bulletins warning expatriates that it was a likely target for terrorists did little to diminish its appeal.

To get there, they would run the friendly gauntlet along Peponi Road, where ragged-trousered squatters would surround the shiny 4x4s, selling everything from flowers to wire sculptures and live puppies.

The events of Saturday September 21, when a group of terrorists invaded the mall and began a four-day siege, killing more than 70 and wounding nearly 200 others, have swept this away.

Ghanaian poet Kofi Awoonor, who was in Nairobi to attend a literary festival, was killed in the attack, as were Kenyan president Uhuru Kenyatta's nephew and his fiancée. Ruhila Adatia-Sood, a popular radio and TV presenter, who was six months pregnant, was gunned down at a children's cooking festival taking place on the rooftop. The car park where she died has gone, collapsed into the bowels of the building in what will be a tomb of an unknown number of victims and militants until forensics finishes its work.

Local media coverage of the attack reflected society's shock. It was portrayed as an unprecedented and unanticipated event, although this is not the first time Kenya has been confronted with terrorism on this scale. In 1998, militants linked to Osama bin Laden bombed the United States embassy in the central business district of Nairobi. In 2002, an Israeli-owned hotel in the coastal city of Mombasa was attacked.

However, terrorist threats have escalated since October 2011, when Kenya sent its army to southern Somalia to crush the Islamic militia that was blamed for a spate of kidnappings of tourists and aid workers in Kenya. The defence forces managed to oust al-Shabab from key towns, including its port city stronghold of Kismayo.

Away from the glare of the international media, at which has been fascinated by the atrocity at Westgate, a series of small-scale attacks have, since the incursion, slowly claimed scores of lives.

Along Kenya's border with Somalia and in the Somali-dominated Eastleigh neighbourhood of Nairobi, churches have had grenades thrown into them and minibuses full of commuters have been blown up.

Kenya's media have been lauded at home for giving a blow-by-blow account of the siege at the mall, but it fell short on analysis and investigative reporting. Few outlets bothered to follow up on the disturbing allegation by a witness that one of the terrorists changed his clothing and slipped out of the mall with some of the hostages, undetected by police.

Conflicting official reports about the identity of the attackers were also taken at face value. Government and security officials claimed all the terrorists were men, but did not identify those they said had been killed or those who were in their custody. The foreign minister then gave an interview in which she said one of the militants was a woman who had done these things "many times before", triggering more speculation.

The attack did at least deliver a much-needed sense of unity and patriotism in this ethnically and politically polarised country. While the siege rumbled on, Kenyans on Twitter created the hashtag #WeAreOne, which was picked up by broadcasters and newspapers.

But the bravado has largely obscured the lack of credible or authoritative information about the attacks, which prompted ordinary Kenyans to post questions anonymously on the internet in a Google document addressed to the government. One of the questions was: "Where are the photos of the dead terrorists?"

There are difficult and disconcerting questions to be answered about recent lapses in security, including a bizarre fire that gutted Nairobi's international airport last month.  They remain unanswered. – © 2013 Guardian News and Media Limited

Rasna Warah is a columnist with the Daily Nation, Kenya's leading daily newspaper. She can be followed on @RasnaWarah