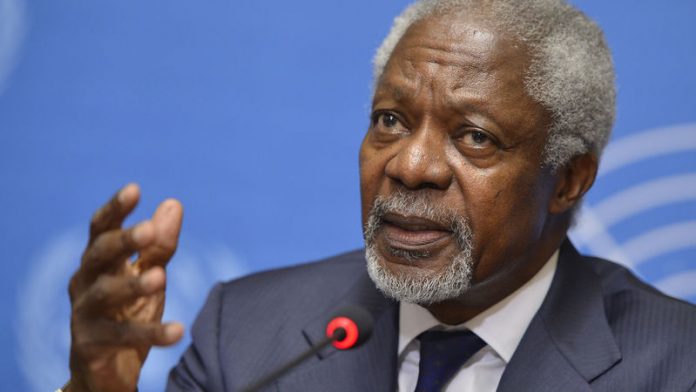 If African victims could get justice in their own countries, there would be no need for the International Criminal Court (ICC) to step in, former UN secretary general Kofi Annan said on Monday.

Speaking at the third annual Desmond Tutu International Peace Lecture, Annan came to the defence of the ICC – which had come under increasing criticism from African countries for "unfairly targeting Africans".

"On a continent that has experienced deadly conflict, gross violations of human rights, even genocide, I am surprised to hear critics ask whether the pursuit of justice might obstruct the search for peace," Annan told a packed University of the Western Cape main hall.

Annan said justice and peace were interlinked, and one could not be achieved without the other.

"We must be ambitious enough to pursue both, and wise enough to recognise, respect and protect the independence of justice," he said.

"And we must always have the courage to ask ourselves 'who speaks for the victims'?"

Annan bemoaned the fact that "the victims of the worst crimes" in Africa had been failed due to inaction against the perpetrators.

In most cases, it was Africans that sought justice, when courts in their own countries had failed them.

'Abuses of power'
"In four of the cases on Africa before the court, African leaders themselves made the referral to the ICC. In two others – Darfur and more recently Libya – it was the United Nations Security Council, and not the court, which initiated proceedings," he said.

Speaking to media shortly after his address, Annan reiterated the ICC was set up as a court of last resort.

"If African victims can get justice at home and we have credible courts and they do take action there'll be no need for [the] ICC," Annan said.

Earlier in his speech, Annan spoke out against the "winner takes all" approach to politics on the continent.

"We have see how this has led to abuses of power by the winner and encouraged losers to reject democracy as a peaceful means for change," he said.

"Desmond has always found the courage, no matter how uncomfortable or dangerous, to speak truth to power."

Introducing Annan to the crowd earlier on, Tutu said he was "deeply blessed" that Annan had chosen to speak at the lecture, describing the former UN chief as "humble".

In his brief introduction, Tutu said he "felt sorry for God".

The Arch – as he's affectionately known around the world – made brief reference to the strife in Syria and the Democratic Republic of Congo.