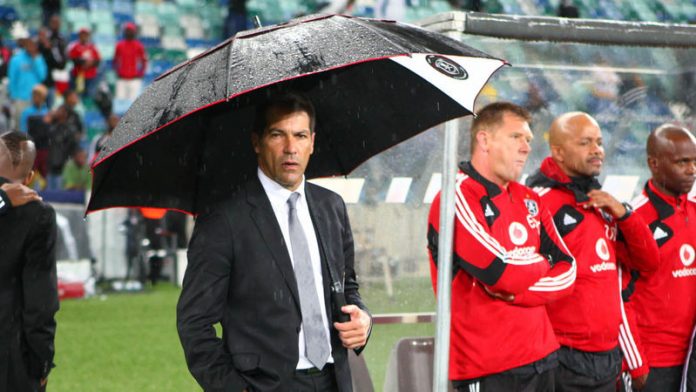 Seemingly heading for extra-time and the possibility of a second penalty shootout in consecutive Cup ties, Orlando Pirates coach Roger de Sa lauded his side for digging deep and churning out a 3-1 win over Mpumalanga Black Aces in Nelspruit on Tuesday.

"The guys once again showed good character. They kept going and hit the posts a few times," De Sa said after the match.

"We kept on believing and the goals had to come."

Pirates were locked at 1-1 against a good Aces outfit at Mbombela Stadium in their Telkom Knockout match, when two goals in the dying stages of the game helped them to the win in regulation time.

Lennox Bacela scored his second of the night to give Pirates a 2-1 lead in the 85th minute and Oupa Manyisa scored a third for good measure, deep into injury time, to seal the comprehensive scoreline.

In the second half, Pirates were dominant, but wasted countless chances in front of goal as the game looked destined to go beyond 90 minutes.

'Tough one'
The Soweto giants were also guilty of conceding just before the half-time break, to completely change the mood of the coach at the interval.

"It was a tough one. When we were 1-0 up we should have finished off the game.

"Going into half-time one up would have been good but it was a silly mistake, just before the whistle, where we gave a goal away and then it was a fight – the last thing we wanted really."

De Sa complimented the style of play by the Clive Barker-run Aces side.

"They play with a lot of flair and they come at you. It's always going to cause problems the way they play … When you're attacking non-stop, you're going to be exposed a little bit, and they can catch you now and then … Today we rode our luck, and to get this win was important – and to score some goals too was good."

'Wonderful game'
Barker, meanwhile, said he was pleased the two sides could produce such an entertaining game of football.

"It was a wonderful game of Cup football, with end-to-end stuff, but they were too good for us in the end," Barker said.

The onslaught from the Bucs was too much for his side to handle in the end, and a goal had to come, Barker conceded.

"In the last 20 minutes they dominated and it was just tough to keep defending … I thought we'd have a chance if it went to penalties, but of course they got the second goal and it was always going to count … It was a hell of a good match and I was glad to be associated with it." – Sapa