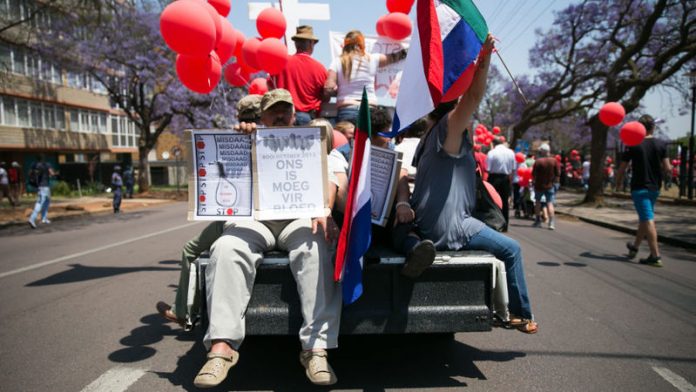 A small gathering of white Afrikaners came together in Pretoria on Thursday for Red October. The international event (other protests of a similar nature took place in New Zealand, Australia and the United States, according to the official website) organised by a minority group of Afrikaners aimed to protest against the oppression of and violence against white South Africans. The procession of about 400 people in Pretoria was led by Afrikaans singers Steve Hofmeyr and Sunette Bridges, who marched from the Pretoria Art Museum to the Union Buildings to deliver a memorandum to the presidency.

Here's a look at the event in nine Instagram pictures:

The crowd marched behind this group of men carrying black flags.

Placards referenced farm murders and other crimes such as rape, and being "finished with black South Africa". Many statements were printed on images resembling the old South African flag.

Upon entering the grounds of the Union Buildings, it wasn't long before the incessant chirping of this bird stopped a few protesters. The bird was met with several "ag shames" and "waar's haar eier?", before being secured with a makeshift fence composed of twigs. Later, a group of people commented that the bird was symbolic of "protecting the minority".

In protest against perceived white genocide – one of the themes of the Red October protest.

Approaching the Union Buildings. The man in front, apparently dressed in an AWB uniform, seemed to assume the role of security along with other men.

Steve Hofmeyr, the leader of the Red October march chats to Melisizwe Bleki, the deputy director of public liason at the Union Buildings, while handing over the memorandum. When Hofmeyr asked for feedback, Bleki responded by thanking Hofmeyr for the memorandum and said that he is not allowed to comment on behalf of the presidency. That responsibility lies with Mac Maharaj. Hofmeyr said they preferred Bleki. "You seem more sober", said Hofmeyr.

The crowd waits for the memorandum to be delivered. The banner in the background reads, "How can the ANC defend people that sing and dance in public about killing the white minority".

Dan Roodt, founder of praag.co.za and an "activist for Afrikaner freedom in South Africa", according to his Facebook page, tries to explain the purpose of Red October to a journalist while the crowd behind him releases the red balloons in memory of the slain.

Once the memorandum was handed over, Hofmeyr spent some time taking questions from the media.

The international journalists were particularly confused and kept asking whether this event was one that upheld the discrimination South Africa suffered in the past, They also made a point of highlighting that only one kind of South African was represented at the protest eventhough Hofmeyr had tried to drive the point home that it was for "all South Africans".

When a journalist questioned Hofmeyr about whether he thought apartheid was wrong, he chuckled and said: "No, I don't think all of it was wrong but it couldn't go on forever." He added that former prime minister and architect of apartheid Hendrik Verwoed "gave us good schools, how can I say that's wrong?"

Dozens of birds and bats perish in extreme heat in KZN