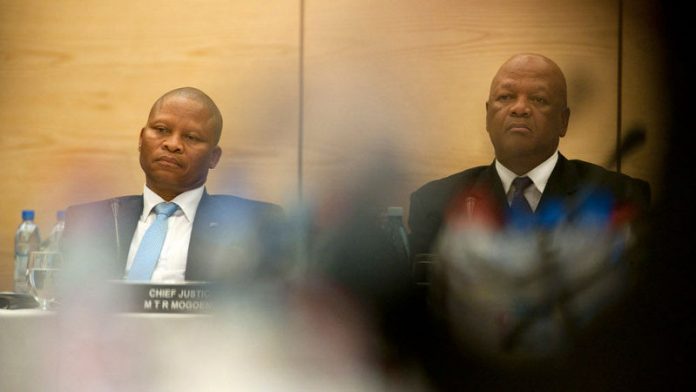 Speaking to reporters shortly after delivering the annual National Institute for Crime Prevention and the Reintegration of Offenders (Nicro) human rights lecture in Cape Town, Mogoeng said the Constitution "has built in it guarantees for judicial independence".

The fact that it was extremely difficult or almost impossible to remove judges and magistrates from their posts benefited the judiciary, rather than harmed it.

"That then makes it possible for any magistrate, any judge to boldly say to whoever might try to influence him or her: No … that however powerful that personality or that institution might be, it is virtually impossible for impeachment, which would result in the loss of employment," Mogoeng said.

He was referring to the possibility of judicial officers being impeached because of their judgments.

There were many hurdles to overcome before a judicial officer could be removed from his or her position, he said.

"Firstly, the lodgement of a complaint with the structure that entertains complaints: if you are found to have committed a gross misconduct, it still has to go to Parliament," Mogoeng explained.

'We're on solid ground'
A two thirds majority was needed to push through a vote for impeachment.

"And still thereafter their [MPs'] decision has to be communicated to the president who thereafter has the final say on the matter, so we're on solid ground as far as individual independence is concerned."

"That will ensure that we run our affairs as the judiciary. All the administrative functions, particularly those that are closer to the operations of the courts, are firmly in the hands of judicial officers," Mogoeng said.

This process had already started following the establishment of the office of the chief justice.

"So, the integrity and the independence of the judiciary is on solid ground. There is no need for South Africans to panic as a result of what is happening before the judicial conduct tribunal right now."

Mogoeng did concede that the Judicial Service Commission (JSC) tribunal into misconduct allegations against Hlophe faced a difficult road ahead.

'Judiciary is in jeopardy'
"It's a difficult situation that confronts all the colleagues involved in the matter that now serves before [retired] judge Joop Labuschagne and his colleagues," the chief justice said.

"But, I think its an over-generalisation to say just because highly placed judicial officers are involved in that matter, the integrity and the independence of the judiciary is in jeopardy."

Hlophe faces the misconduct tribunal after Constitutional Court judges Chris Jafta and Bess Nkabinde alleged in 2008 that Hlophe had sought to unduly influence them in a corruption case against President Jacob Zuma.

That tribunal was postponed on Tuesday following a request by the advocate representing Jafta and Nkabinde.

Jafta and Nkabinde have indicated they will approach the high court for a review of the decision to continue with the hearing.

They want to be excused from appearing and testifying pending the finalisation of the review, despite tribunal chairperson Labuschagne's ruling that Hlophe has a case to answer to.

Appointing more judges, magistrates
While, the attempts to impeach Hlophe continued, Mogoeng would be approaching President Jacob Zuma with a proposal to appoint more judges and magistrates.

In his speech at the Nicro lecture series, Mogoeng said the only way to combat crime effectively was if the number of judicial officers were increased.

He said part of the reason for the entire justice system being so slow, was that there were too few people on the bench to hear cases.

"Germany has got a population of 82-million while we have around 52-million. We have a total of magistrates and judges standing at about 2 400 while Germany has 20 000 judicial officers and that would explain why they are able to deal with crime and to process their cases more speedily," he said. – Sapa