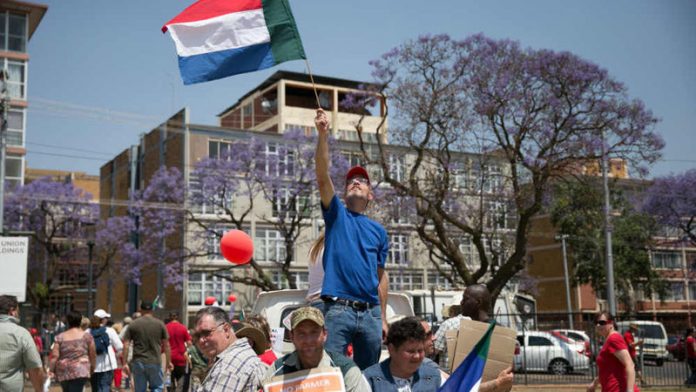 There were old South African flags, zombie make-up and posters featuring photos of dead farmers when the Red October group marched on the Union Buildings in Pretoria on Thursday. The march also called for tolerance and warned against hate speech and racism.

The mostly white Afrikaner group, organised by Afrikaans singer Sunette Bridges, delivered a memorandum calling for an end to black-on-white violence and what it termed reverse racial discrimination in education and employment.

The group and its organisers had come under fire from other Afrikaans constituencies for appropriating a traditionally communist slogan for its name on what in previous years had been celebrated as Kruger Day, the birthday of Boer resistance leader Paul Kruger.

But although Vierkleur flags and old South African flags (both strongly associated with the far right wing) were common among the 400-odd marchers in Pretoria, organisers said they were fighting for the rights of minorities, and not protesting black rule.

"Everyone is welcome here," said popular Afrikaans singer Steve Hofmeyr, who acted as a celebrity draw card for the event. "We march to prove that there are South Africans left who won't acclimatise to the sub-standard."

Focus on crime against white people
​Complaints include the state of public services, such as health care and education.

Despite arguments that the event was intended to advance minority rights in general, the focus was very much on the rape and murder of white people by black people, something organisers did not shy away from characterising as genocide.

Hofmeyr, who has been called out for using dubious statistics to back up such claims, was unrepentant about saying white people faced an exaggerated threat, and about focusing on crime against white people.

Crime affects everyone in South Africa, he told the crowd, but Afrikaners had the right to count their own dead. "If we say all deaths should be counted, why do we count the rhinos and not count all dead animals?"

Of ciphers and little favours

Unplug me from fallacious arguments about race