Coal comfort on the edge of despair 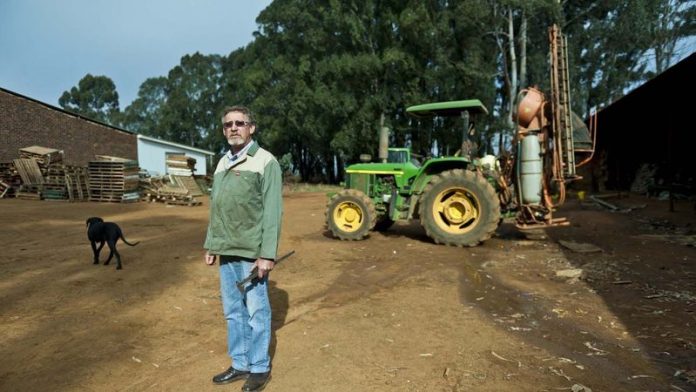 Johan Botha was driving between two of his farms outside Chrissiesmeer in Mpumalanga on a warm summer's morning when he noticed that there were people gathered on one of them. He approached them with his son and found out that they were a prospecting team for a mine.

"The first I knew about the permit they had for mining was when they brought their machines on to my land," he says while standing outside his farm shed on a cold Tuesday afternoon. They had not asked for his permission. "My son was ready to hit them, and we told them to leave."

That mine was Xstrata Coal, but the rights have now been sold to Msobo Coal. Their claim in 2001 started a 12-year battle between the mine and the community.

Because the government owns everything under the surface, farmers have to grant access to mines that get prospecting or mining rights. All the mines have to do is file the correct paperwork and then work out compensation with the farmer.

"When they came back, I told them I could not refuse them because they had a permit, but they would have to do their mining properly. I do not want a repeat of what is happening all around us."

Now it is nearly maize planting season, and Botha's main farm is buzzing with activity. A fleet of green tractors is being serviced and tinkered with in preparation. He has little time to talk.

"I am tired of fighting. I had a heart attack because of the stress so now my son is handling it."

The proposed mine is on the ridge of his farm, and he points to it in the distance. It has been in his family for five decades and his sheep graze there. "I wish it was different. Will my grandchildren accuse me of selling their land for some money now – and what use is a little bit of money now anyway?"

The mines exploit the constant financial pressure on farmers, offering immediate income in return for long-term damage to their land, he says. In some cases, mines will buy a farm when it comes on the market so they get it cheaply, before speculation increases its value.

"They know how to play dirty," Botha says before returning to work.

The site is in the catchment area for Tevrede se Pann, the southern hemisphere's largest reed pan. It is also on the watershed – water from here flows to the Olifants River and then on to the Indian Ocean, or to the Vaal River and the Atlantic Ocean. The Boesmanspruit Dam is also fed from this area.

In the distance, a stream of smoke winds its way from the top of one of Mpumalanga's ubiquitous coal power stations into the grey, overcast sky.

The pan is one of 270 that have given this area its unofficial name – the Lake District. The small village of Chrissiesmeer is the hub of this, and its residents are afraid of the constant encroachment of mines.

"This is really an area that has to be protected. The mines are here for 15 years and then they go. Nature is forever, and when this area is gone, there is no replacing it," says Hester Bezuidenhout.

She runs the Frog Coffee Shop with her father, Ben, and also operates tours around the pans.

In between selling sweets to the children streaming out of the nearby school, Ben says: "These miners don't care about anything but coal. They are forcing us to choose between our environment, water and coal. But wait for me to finish with the kids, then we can talk."

His voice booms through a thick white beard. "They haven't even tried to convince us that the mining is good for us. They don't care. They just want the coal, so they will come and take it."

The two are part of the wider community group that has been fighting mining for the past decade, motivated by the towns around them that have been destroyed by mining.

"All you have to do is look at Ermelo [40km away]. The mines have blocked the rivers and their dams are dry. The town is having water problems and we don't want that," says Ben.

One dirt street away is the old brick Barclays Bank. Tom Sanders, its owner and resident historian, is slow to answer the door. The creaking of century-old floorboards marks his progress before the door opens. Holding a pipe and his glasses, he quickly starts talking about the mining history in the area.

His point of reference is a yellowed map from 1902, and he illustrates how mining has happened in every region except Chrissiesmeer. "This is an oasis, but around us, we have mines."

He talks about the lawyers and consultants involved in the 12-year-long fight as "ours" and "theirs". "The mines are hard-nosed so it has been a proper fight."

The community's battle has been twofold: to stop the immediate threat of mining and to have the whole area protected. In 2011, Mineral Resources Minister Susan Shabangu declared a three-year moratorium on mining.

In her budget vote last year, she said the department had "taken a decision to prohibit mining in these areas". After much delay, the provincial branch of her department gazetted its intention to declare the whole area the Chrissiesmeer Protected Environment. In theory, this would prevent any mining for at least the next 20 years. The comment period for this closed on Wednesday.

But another mine has already crept inside the 10km no-go area in the moratorium. The valley it lies in is now black with coal, in stark contrast to the green and yellow reeds of a nearby pan. The closest pan is dry – in an area where the pans are famous for always being full.

This has left locals a bit cynical about what the protected environment declaration will mean. "It will give us some legal authority to fight mines and I don't think they will mine. It is utterly ridiculous and everyone knows that," says Sanders.

But Botha has given up the fight and is ready to let the mine start working on his land. "I am hoping they use this as an example of how to do it properly and not work like all the other mines around us."

The diggers will soon be back on his property, this time with his hesitant permission.

At the time of going to press, the department of mineral resources and Xstrata Coal had not responded to repeated requests for comment.

People are handing over their pets to shelters, but they too are battling financially
Read more
Advertising
Continue to the category
Coronavirus