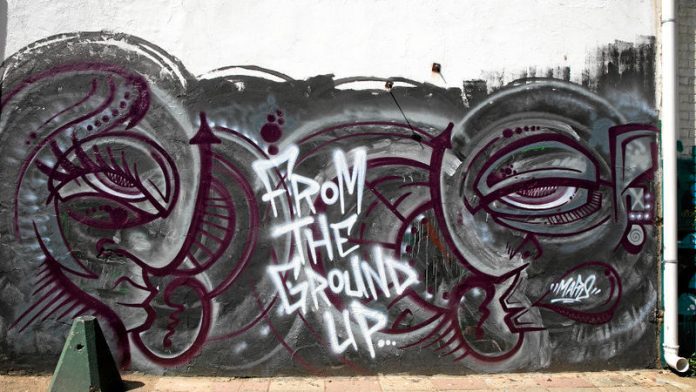 For 10 years graffiti artist Mars has marked Johannesburg's walls, alleyways, bridges and train carriages. This month, the 25-year-old, whose day job is as a graphic designer, takes on the challenge of a different set of walls – inside a gallery. His debut exhibition, From the Ground Up, will see him make the transition from public spaces to a commercial gallery, from ephemeral works to lasting artworks. It is a first for the artist and a rare transition in the local graffiti world.

Talking of the exhibition, he says: “Maybe it's not graffiti per se because I personally find that with graffiti if you just slap it on a canvas and put it in a gallery, it doesn't really work. You've got to combine it with elements of illustration, design, typography or fine art … so people can maybe take it home. I think it's a different space altogether. There are all sorts of different rules.”

What was the first thing you ever wrote on a wall?
I think “fuck” or something. Give anyone a spray can – that's the first thing people write, or they draw a giant penis. There should be some sort of social study based on that …

Where did you learn about graffiti?
?I saw spray painting in the movie 187 with Samuel L Jackson, so we went and wrote all these swear words and nonsense in an abandoned church next to my house … Then I met kids who were doing it and they showed me what makes good graffiti or crap graffiti. No one really knew at that time. This was almost 10 years ago, in the northern suburbs.

What attracted you to it?
A natural progression really. I was first into skateboarding. It's sort of the same, in the streets … I watched the kids on TV smoking, skateboarding and then spray-painting, so we were like: “Let's go and spray-paint just for the hell of it”. It really didn't have anything to do with art. Looking back it was just something I felt was missing out of the whole picture. We had the skateboards, cheap wine, just no spray cans. A lot has changed. I don't even drink anymore but over the years it has become more of an escape thing, to get away from normal everyday stuff I guess.

How do you choose your walls?
There's a bit of etiquette. You usually go for one that already has graffiti. That way you know they don't clean it off. You also want lots of people to see it. The last thing you want to do is go on someone's brand-new wall.

Tell me about the legal/illegal divide.
You get the owner's permission. The legal ones take more time and people put effort, money, spray paint into it. Some of the best walls are done that way. With the illegal stuff you don't ask, you don't put a lot of time or resources into it because it can get cleaned any time and you don't want to get caught … but ultimately the reward can be the same.

What's the most dangerous situation you've ever been in?
I don't think I want to talk about that.

What work are you proudest of?
I guess it depends on the memories attached. I've been some crazy places that I never thought I'd be. Living this lifestyle I've met some really interesting people, so it's about a lot more than just what's on the wall

How has the graffiti scene changed since you started?
Drastically. There was no imported spray paint then just the terrible hardware-store stuff. In the past four years the graffiti shops have opened and people are getting super famous just off the internet, which is cool, making it very accessible. Now there's a global scene. We're still primitive compared to first-world countries but there's so much more out there, [even] in mainstream media.

Is there a message in your work?
A lot of it is just that graffiti is really an art form. I am trying to show people it can be taken seriously.

Why Mars?
Spray-painting in that abandoned church I drew an alien face. Then I figured graffiti needs a word next to it. My friend said you might as well put Mars there or some planet because that's the most obvious fucking thing. It kind of just stuck.

Do you think you'll ever stop?
I'd like to think not. In another five years I'd have been doing it for half my life. I went into design because of graffiti. My tattoos, my appearance and what I do … it's all based around a can of aerosol

Does Jo'burg need graffiti?
Every city does. It's the everyday working-man's expression … If I saw a city with no graffiti I would think there's only robots living there. It's just something people are inclined to do, like carving your girlfriend's name on a park bench.

From the Ground Up is at Two by Two Art Studio, 41 Gwigwi Mrwebi Street, Newtown, until October 24

Mapping the city through graffiti