Improved drugs to manage diabetes may well be on the cards if more studies are done on green rooibos tea's efficacy in glucose control in humans.

A Medical Research Council (MRC) study published in the medical journal Phytomedicine in July showed that diabetic rats that were given green rooibos tea were able to maintain lower blood glucose levels than rats that weren't given the substance.

According to Christo Muller of the MRC, who was one of the study's authors, green rooibos improves cellular metabolism and increases the breakdown of sugar into energy.

People with type 2 diabetes – diabetes that usually develops later in life as a result of the body's inability to use insulin properly – have sugar levels that are too high because their bodies can't utilise the sugar fast enough.

According to the Human Sciences Research Council's 2013 health and nutrition survey, about one in 10 South Africans has diabetes. About a quarter of people between the ages of 55 and 64 have dangerously high blood sugar levels and are on their way to getting diabetes.

Antioxidants
Green rooibos contains a powerful antioxidant – a substance that protects tissue in the body – called aspalathin. Green rooibos is made from the same plant as traditional red rooibos but, according to the Rooibos Council, it's processed differently and contains several antioxidants,  besides the rooibis-specific ones.

Twenty-five rats in the MRC study were each given one dose of green rooibos tea extract orally in liquid form. The effects on their blood glucose were measured over a six-hour period. They could process sugar faster and had lower blood sugar levels after they were given the extract.

"Aspalathin was also shown to improve lipid [fat] metabolism. These plant-derived compounds have the potential to protect against the development of diabetes," Muller said.

Three international studies, conducted in Japan between 2009 and 2012, also showed that aspalathin can increase the metabolism of diabetic rats.

"When developing new drugs to protect against type 2 diabetes we are looking to improve insulin resistance, find treatments that have fewer side effects as well as slow down the progression of diabetes to make complications less severe. With aspalathin we could possibly delay the onset of diabetes," Muller said.

"There are many natural chemicals in plants that have health benefits, but our challenge is to isolate and identify those compounds specifically responsible for such health properties."

Muller said the results of the South African study are preliminary, as tests have not been done on humans.

"Human trials are about three years away," he said.

"We won't be studying drinking the tea, as people make tea in different ways. When we use an extract we have control over how much tea the extract contains."

"There is no wrong answer here. Rather than judge the treatment, we must understand what the intention of using it is. If perhaps it is used to aid in lowering the glucose levels, then there are well-validated agents such as cinnamon that can play a small part. If after starting the agent there is no added value then it should be stopped," he said. "This would also be the case for any prescriptive treatment used – it either adds value or is stopped and replaced."

Landau said "the cornerstones of diabetes treatment must prevail", which is to control one's diet and exercise regularly.

"Healthcare practitioners must also be open to the notion that many of their patients are using such remedies. Their doctors can discuss with them whether the treatment has known benefits or not, possible interactions with other therapies and how best to monitor effectiveness."

Roy Jobson from Rhodes University's pharmacology department however warned that, because of a lack of regulation, "natural products" in South Africa can contain "anything, including toxic substances". 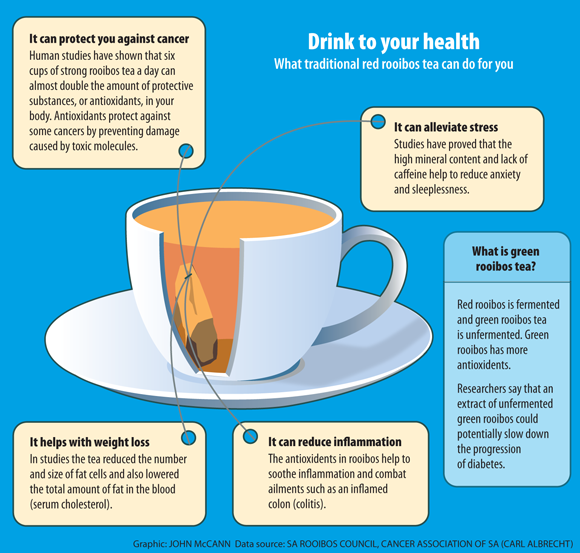 Six cups a day help to keep cancer away

"It is more beneficial to drink rooibos than ordinary tea and coffee, but rooibos doesn't have any vitamins … nor does it contain protein. It's herbal and has a few minerals, but not at very high levels."

Rooibos also protects the heart as it reduces the number of fat molecules (cholesterol) in the blood and prevents blood clots. Fat molecules make it difficult to transport blood to the brain, and may also lead to heart disease.

Research supported by the Cancer Association of South Africa has shown that six 200ml cups of strong (tea bag steeped for five minutes in boiled water) rooibos tea a day increases the body's natural antioxidant, glutathione, by almost 100% in humans.

Glutathione is a natural antioxidant present in our bodies that helps to rid our systems of harmful substances, according to the cancer association's head of research, Carl Albrecht.

"It is a well-known fact that glutathione is powerful for its ability to protect the body against cancer. It can bind to toxins that cause cancer and eliminate them from the body naturally."

"Glutathione is processed in your stomach and this processing prohibits using glutathione as such as a supplement, for instance in the form of a pill. Rooibos tea stimulates the body to make more of it," Albrecht said.

"A lot more work needs to be done and rooibos certainly is not a cure for cancer.

"We also know that diseases such as cancer, diabetes and obesity are intertwined at the cellular and molecular level and if you can maintain a healthy body mass index you can reduce your cancer risk by 15%," Albrecht added.

Lenadine Koza is a Bhekisisa fellow