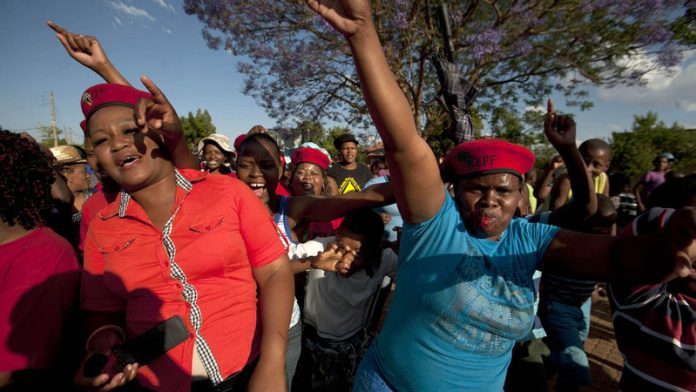 Julius Malema has declared that his party, the Economic Freedom Fighters (EFF), is the ruling party-in-waiting, and that the election next year will affirm its popular support.

Malema has never been short on hyperbole and his claims will be treated as yet another mouthful from the former ANC youth league leader, who is not known for his modesty.

The launch of his party on Sunday October 13 will be a moment of reckoning for Malema because it will put to the test his unrealistic boast that the EFF has enough support to take over the running of the country after the elections.

The ANC has not publicly admitted that Malema is a threat to its support during next year's polls, but a number of events suggest that, in reality, the ruling party is not leaving anything to chance.

The appointment of former youth league president Malusi Gigaba as the head of its elections committee indicates that the ANC is looking to win over the youth vote that Malema is relying on for his support.

The ANC has also roped in another former youth leader in Fikile Mbalula, who has been a key organiser for the party in the past but had fallen out of favour because of his failed campaign to remove Jacob Zuma as ANC president.

'Gap in our politics'
The Independent Electoral Commission has identified that there are 12-million voters who are between the ages of 18 and 39 whose support is up for grabs by all the competing political parties.

Malema has fashioned himself as the champion of poor, unemployed young people, who he says have been betrayed by the ANC and business. But does he really have their vote?

Political analyst Steven Friedman is convinced that Malema does not really enjoy the kind of backing he claims to have.

"There is a gap in our politics to the left of the ANC," Friedman wrote in Business Day in June. "But Malema cannot fill it: he has no support among the poor and no sense of how to speak for people at the grass-roots level. Given this, why does the prospect of a Malema-led party get so much attention? One answer is that political journalists are entranced by him. Many middle-class people harbour deep fears that a majority-ruled South Africa cannot prosper. One aspect of this fear is the expectation that a demagogue will arise who will whip the poor into a frenzy of retribution, urging them to seize the goods of those who have what they lack. This fear is ignited whenever anyone in the ANC begins using militant language: because it runs very deep, no one bothers to ask if they really enjoy support."

But there are signs that ANC leaders are at least thinking about him.

Malema has claimed that, in the week of his public consultation with his supporters about whether to form a party, he received a call from the top echelons of the ANC asking him to negotiate with them. He claims he rebuffed the overtures from the party that expelled him.

Panyaza Lesufi, mostly known as the spokesperson for Basic Education Minister Angie Motshekga and a member of the Gauteng ANC provincial executive committee, recently wrote an opinion piece in which he urged the ANC to reconsider its decision to expel Malema. He also urged Malema to return to the ruling party.

Well grounded
The ANC distanced itself from the call, but it is known that what partly motivated Lesufi's call was the reception he saw the ANC getting in many communities on the East Rand. In door-to-door campaigns in the townships of Thokoza, Katlehong, Tembisa and others, the ANC regional leadership met families who openly expressed support for Malema. Most ANC members dis-agreed with Lesufi's argument on the basis that Malema had not shown contrition after his expulsion.

The ANC's own internal surveys last year – even before the EFF was formed – were already indicating that the party might shed some votes next year. It is not known whether the formation of the EFF could compound those concerns.

Malema had a spring in his step this week after the EFF won four seats in the University of Limpopo SRC elections. The EFF performed even better than the ANC Youth League, but was beaten by another ANC-aligned structure, the South African Students Congress, which won seven seats. The youth league won three seats.

The EFF claims to be well grounded in Limpopo, where many structures that used to support Malema and ousted premier Cassel Mathale were disbanded by the interim provincial leadership of the ANC. The EFF is actively recruiting in those structures.

ANC president Jacob Zuma has visited Limpopo several times recently. He went to a church in Giyani last Sunday, and then returned to the area on Tuesday to open a new road.

The ANC will say with great confidence that Malema does not constitute a threat and dismiss his bluster that they are running scared of him. But there is enough to suggest it will have to take note of him as a possible threat to its majority.