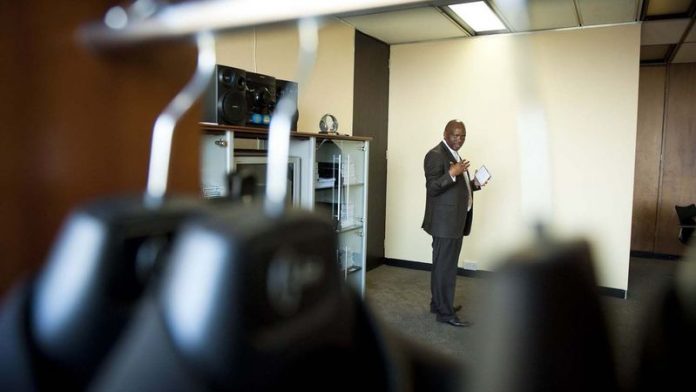 It becomes clear very quickly why acting chief operating officer Hlaudi Motsoeneng ­elicits the column centimetres in the media, and not his boss.

"Hlaudi has got the pull factor," explains the person he reports to, SABC group chief executive Lulama Mokhobo, after posing with him for photographs in the boardroom at the SABC's Auckland Park offices, before she retreats back to her office.

"The sooner people realise I don't like being in the spotlight, the better."

And Motsoeneng gets more spotlight than most of the soap opera stars on the state broadcaster's channels, often because the SABC's boardrooms and newsrooms have more intrigue, backstabbing and heartbreak than their most over-the-top dramas. His often controversial statements on issues such as  "sunshine" journalism and his perceived blind support for President Jacob Zuma also make him a media subject.

The "fortysomething" Motsoeneng, who finally agreed to the Mail & Guardian's request to spend a day at the SABC this week, lives by a punishing schedule. This includes the first meeting of its newly appointed board.

Motsoeneng has a modest office, but with a spectacular view of Johannesburg and way, way beyond the Magaliesberg that would send estate agents into paroxysms of ecstasy as they reach for their ­thesauruses to describe it. But, of course, the broadcaster's headquarters in Auckland Park is not for sale, at least not in the literal sense.

The first of many interruptions in the energetic Motsoeneng's packed Monday schedule comes when he has to examine a mobile clothes rack of black suits in his office. He has taken it upon himself to inspect the outfits of male television presenters. "We are smartening them up for a really professional look," he says, dressed in a shiny grey suit and expensive-looking brogues. "I must check them before they go back to the wardrobe."

Tough upbringing
His staff say Motsoeneng might call you as late as 11pm or as early as 6am to discuss an urgent matter. Differences are quickly put behind him: as one executive says, if you are still bleeding over yesterday's argument, he has no time for it.

Controversy over his role at the SABC has raged for more than the two years he has been in this acting position, especially as he did not obtain a matric, previously a requirement for the job.

It tells a story about his tough upbringing. But Motsoeneng refuses to discuss his parents, who are still alive, and hesitates before describing his personal hardships in growing up in Qwa Qwa, a former homeland that now forms part of the Free State.

"I was shaped by my schooling. I was one of the actors in a play, and I also wrote some plays. I participated in public speaking. At school, I won many competitions, from primary to senior secondary school," Motsoeneng says.

"When I grew up, I had to choose between work and school because no one was looking after me anymore. My grannies had passed on. By the time I was in Standard 3 [Grade 5], I was staying alone. I lived in a mud hut I built and I grew up with other kids in the area. The hut sometimes caved in on me when it rained. I was struggling, to be honest. Even just to eat, it was not easy. People would come and help me. Sometimes, a day would pass when I was not eating."

Despite his early struggles, Motsoeneng has  rapidly risen to power at the public broadcaster, a transformation that began when he was appointed as the SABC's executive news producer for current affairs at Lesedi FM in the Free State. In his current post, he has been accused of censorship of an advert and programmes that could offend the ANC or Zuma, yet he professes to have no close relationship with "Number One".

In March this year, Motsoeneng was dramatically fired from his top post by the previous board.

Hullabaloo
Some board members complained that Motsoeneng was using disputed claims made against them in a Special Investigating Unit report he commissioned to put pressure on them to support his permanent appointment to his post.

A former board member told the M&G at the time that Motsoeneng was axed from his acting role to give Mokhobo space to implement her own ideas. His removal would have allowed her to appoint the chief operating officer of her choice.

Yet disputes between the now ousted communications minister Dina Pule and the board led to the mass resignations of its ANC-appointed members and the eventual dissolution of the board. To use one of Motsoeneng's favourite words, the "hullabaloo" died down. Ultimate survivor that he is, he stayed on in his key post.

There are lots of unscheduled meetings in his office, as staff need no appointment to see him. Motsoeneng's management team arrives en masse for the regular boardroom meeting. "These are the generals," says Motsoeneng, who likes to joke. "No, No, you see, these guys are Hlaudi. These are the troublemakers." The members of his team are highly respectful in the way they respond to him.

Motsoeneng asks the unsmiling revenue generator, Anton Heunis, the general executive of commercial enterprises, to kick off the session and explain what his job entails.

Heunis  was once in the news after he was suspended by the public broadcaster when he was head of audience services in 2009. No evidence was found that he had benefited financially from an irregularity identified in auditor general Terence Nombembe's report on corruption at the broadcaster, and he forms an essential part of Motsoeneng's team.

Later, Motsoeneng and the head of group communications, Kaizer Kganyago, lead the way down the bland corridors to Mokhobo's office. Over the past eight years, there

have been six SABC boards, and six chief executives, and enough scandals to make a soap scriptwriter salivate.

Ecstatic
The SABC is currently embroiled in an ongoing court battle with Phil Molefe, the corporation's suspended news and current affairs executive. Mokhobo and Molefe fell out when she asked for access to a news diary that featured coverage of former ANC Youth League president Julius Malema.

Right now, Mokhobo is ecstatic, as the SABC has saved more than R45-million in interest through the early repayment to Nedbank of its R1-billion government-guaranteed loan. "We have paid back R1-billion, and we have R1-billion in the bank," says Mokhobo. "This ship is not sinking at all."

Recent reports claimed the auditor general's office had red-flagged the SABC with a disclaimer of opinion that the public broadcaster had recorded expenditure of R1.5-billion without supporting documentation during 2012/2013. This was contained in the SABC's annual report for the year ended March, which was recently tabled in Parliament.

"The media must have people in their office that can interpret the auditor general's report," says Kganyago. "Because for people to then write that we have squandered R913-million of TV licence fees is just not right."

Motsoeneng jumps in: "Whether it is print media or television, there are so many positive things the SABC has achieved. Profit and so on, and other matters. The media don't focus on those matters. They are too selective. I want to change the mind-sets of journalists and people."

Warming to the topic, Motsoeneng homes in on his controversial view that the SABC needs more sunshine journalism.

'Sunshine journalism'
"And I want to say in front of the group chief executive, it is not the position of the SABC, but it is my position. If I can influence [it], it will be there in the policy. It may be 60%, it may be 70%. I am not forcing anything, but if I can get 70%, I will hug my group chief executive. We are doing public hearings, and I want this as an individual, and as a former journalist. I know that, by doing more positive news, we will attract more audience."

In recent weeks, critics have panned Motsoeneng for encouraging "sunshine journalism" at the broadcaster.

The executive has been actively campaigning at public participation sessions for his controversial plan for a 70% quota of positive news in each news bulletin.

Now, he wants it written into the SABC's editorial policy currently under review.

Data collected from the public process will be analysed by top academics and other professionals, says Mokhobo.