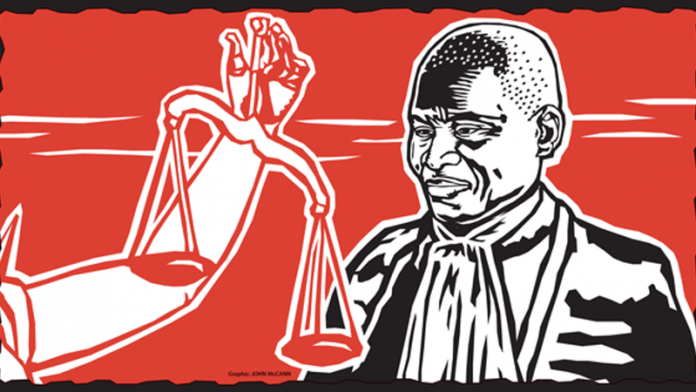 In 2011, Mogoeng Mogoeng was not the chief justice some South Africans wanted. He was the judge with whom God had spoken about becoming head of South Africa's judiciary, a former judge president of the North West division – described as a legal "backwater" by more than one lawyer – who had, in various judgments, apparently sought to apply a grading system to rape and its associated trauma.

Mogoeng was also the only justice at the Constitutional Court to hold, in the Le Roux vs Dey judgment, that calling someone gay was defamatory. By not giving reasons for a dissent that imputed that being called 'gay' was a slur, a perception of homophobia clung to his green robes, raising questions about the impact of his Christian beliefs on his legal thinking.

He was also not Deputy Chief Justice Dikgang Moseneke, a most independent-minded and imaginative jurist, whom many, from white liberals in the legal profession to shack dwellers who had approached the Constitutional Court for socioeconomic succour, believed played the law like a virtuoso on violin, immaculately in time with the progressive values of the Constitution.

Mogoeng's interview before the Judicial Service Commission (JSC) in Cape Town in September 2011 was a brutal public baptism at which his religion, jurisprudence, views on homosexuality and gender-based violence and intellectual depth were just some of the topics traversed over an unprecedented two days.

Unsuitable
?At one point during his interview, commissioner and Inkatha Freedom Party MP Koos van der Merwe put it bluntly, telling Mogoeng that he was "arrogant", unsuitable for the position and should withdraw immediately.

Mogoeng did not and the indications are that, two years on, he is increasingly comfortable in his role as chief justice of South Africa.

He may not be an intellectual soloist in the mould of his "brother" on the Constitutional Court Bench, Edwin Cameron, but there are indications that as Mogoeng continues to ease into the row of South Africa's judicial first violins, he is also evolving into an adept chief justice, with the administration of justice and transformation of the judiciary foremost among his professional passions.

He certainly isn't emerging, as some feared, as a religious zealot whose Christian beliefs could pose a threat to the reading of a secular Constitution.

This was made evident most recently in the Teddy Bear Clinic judgment handed down by the Constitutional Court earlier this month. Mogoeng concurred with Justice Sisi Khampepe in a unanimous judgment that struck down sections 15 and 16 of the Criminal Law Act, which criminalised sex between consenting minors.

Lawyers familiar with the case called it a "highly progressive" judgment and noted that Mogoeng had been rigorous in his line of questioning when the matter was heard, "surprising" many by the manner in which he "was clearly moved by the notion that consensual sexual behaviour between minors should not be criminalised".

Indicator
The religiously sensitive issue of underage children having sex is the sort of indicator of whether Mogoeng's social conservatism and religious beliefs colour his jurisprudence. In this case, they apparently did not.

There are even suggestions that Mogoeng's core Christian values, like a strong work ethic, can be used to persuade him during Constitutional Court discussions towards a more progressive legal decision.

A lawyer at a public-interest law organisation noted that his "jurisprudence has not been as conservative as some critics thought" it would be.

Another went so far as to suggest that, on socioeconomic rights, the Mogoeng court is "a little more progressive" than the one led by the late Arthur Chaskalson – often held up as the benchmark at Constitutional Hill.

Some lawyers point to his dissenting judgments, usually with justices Ray Zondo and Chris Jafta, as a "potential concern". The three, according to one lawyer who has appeared before the Constitutional Court, form the "core of a potential conservative wing" on that Bench.

Elite politics
This conservatism, the lawyer suggests, is revealed in "certain key, high-profile cases around elite politics" such as the Constitutional Court's judgment on the Democratic Alliance's vote of no confidence application, and could make for a more interesting reading of the Bench's politics as judges like Moseneke and Thembile Skweyiya retire in the coming years.

But, as Mogoeng suggested last weekend when he received an honorary doctorate from North-West University, he is more his own man than anyone else's.

Mogoeng is more complex and intelligent than many in the media have assumed. He is adaptable and certainly open to engagement and persuasion. This was apparent during the JSC's interviews of prospective judges held in Cape Town last week.

With gender and race transformation of the judiciary a contentious topic over the past few months, Mogoeng questioned female candidates on their experiences of patriarchy and misogyny in the profession, what structural issues they felt needed addressing for transformation to be speeded up, how they thought gender added value to the adjudication of cases and how they felt about state and private business briefing patterns. In short, he was impressive.

Mogoeng is businesslike in how he runs both the JSC and the Constitutional Court "without being tyrannical", according to one lawyer who has appeared before that Bench.

Accessible
A former commissioner noted that he was "outcome driven" in both his approach to JSC interviews and in his attempts to transform the judiciary and make the courts more efficient and accessible to South Africans – abiding passions.

Mogoeng currently chairs the national efficiency enhancement committee, which oversees the efficient running of the court system, and a judicial case management system is being tested in several high courts with a rollout to all high and magistrates' courts imminent.

Mogoeng is mindful of his strengths and weaknesses and acts accordingly, say those who have knowledge of how he operates.

Lawyers who have been to his chambers and colleagues in the judiciary and the JSC describe Mogoeng as "warm", "boyish and youthful" and willing to engage.

His sense of humour is also emerging with his increasing confidence in the solid job that he is doing to improve access to and the administration of justice, vital for a backlogged and overburdened court system.

Two years in, Mogoeng is adding strings to his bow and, contrary to the fears at the time of his appointment, he isn't conducting judicial manoeuvres in the dark.

Niren Tolsi is a senior reporter for the Mail & Guardian