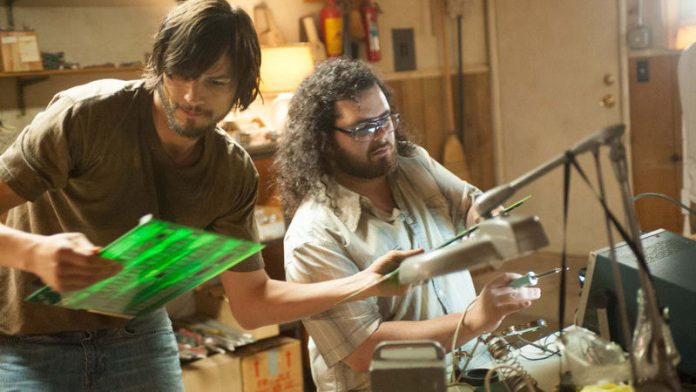 MOVIE REVIEW: NOT THE BIOPIC OF THE WEEK

The memory of the man is breathing down the neck of this movie.

Jobs achieved what many of us will never even get to imagine in our lifetimes, and soon after his death there was a deluge of writing about his life and his exploits.

Some even included the less palatable parts of his life: that he was often callous towards his friends, that he abandoned his pregnant girlfriend and that he was averse to basic hygiene.

Nevertheless, he is regarded as one of the greatest innovators of the modern era. Rightly so; I was watching this movie screening while jotting down notes on my iPhone 5 made by Apple, the company he founded that has now replaced Coca-Cola as the world's top brand.

The facts of his professional greatness are what the movie seems solely interested in, and those are already well documented. So it's not the eulogies and the Walter Isaacson Steve Jobs tome that weigh down this movie; it's the imagination of the viewers, many of whom would have heard, seen or read every detail of his life already. Our lives are chock-a-block with our own visions of Steve Jobs, the visionary entrepreneur and Apple chief  executive. There is, as yet, very little space for someone else's interpretation.

This is probably why the makers of the Facebook film, The Social Network, did not fully shy away from the idea that the movie was embellished. They knew that there was no fighting with the audience's own access to information, that they had to give them something more. They also had a clever, cracking script, something that Jobs had to do without, for the most part.

The makers of Jobs decided to go with a literal representation of Steve Jobs. Not only does Kutcher look like Jobs, they also have him aping Jobs down to the walk, which, unfortunately, does not stop being jarring. You will see in Kutcher's performance all the quirks of iconic Jobs: the thumb on the finger, the way he moved his hands.

The Kutcher casting lacks imagination, which is ironic because this is a movie about a person who enjoined the world to "think different". But, to be fair, Kutcher gives it his best shot, and his attempt is more than adequate.

One character who does shine is Apple co-founder Steve Wozniak, as played by Josh Gad. Gad brings depth and humour to the role; and it's a pity that the movie does not do more with him.

Many of the other characters introduced are abandoned, their relationships with Jobs are never built on, rendering Jobs not just a lonely figure in person, but also in the movie.

We know that he and Wozniak drifted apart, but we are never really let into the effect of it until close to the end &ndash; or the falling-out with the rest of the co-creator crew with whom he built Apple in his parents' garage.

His parents, while supportive, are little more than cardboard cutouts, and all we know of what motivated him as a young man is what we see  smashed into a strange montage of Jobs spinning in a field, high on drugs.

We never get to see what softened his heart enough to accept the child he was prepared to exclude even from child support, or how he came to marry the woman who became his wife and confidante for 20 years.

We whizz through Jobs's life even in the parts the creators of the movie do deem important &ndash; such as the boardroom happenings at Apple. There is no time to breathe or even reflect when Jobs is ripped out of his own company and when he finally takes back the helm.

What we are left with is a two-hour infomercial &ndash; a good one, to be sure, but little more. Still, we must sympathise: it's tough to squeeze such a great life into a movie.

So file this film away in the archive folder full of Steve Jobs information and reference material, and wait until the time comes &ndash; hopefully not in the too-near future &ndash; when someone dreams up a Steve Jobs movie that succeeds in reigniting our imagination.

Our ancestors worked less and had better lives. What are we doing wrong?

Workplace diversity is under the spotlight