Buy it or hate it, Banksy’s art hits streets of New York 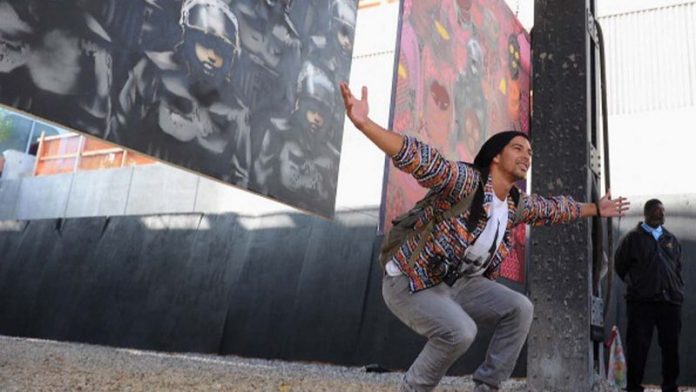 Known for his anti-authoritarian black-and-white stenciled images, which have sold at auction for upwards of $2-million, the British street artist is treating New Yorkers to a daily dose of spray-painted art – while eluding the police and incurring the wrath of New York Mayor Michael Bloomberg.

"Graffiti does ruin people's property," Bloomberg said at a recent press conference. Reactions from other New Yorkers to the pieces – which appear overnight, usually on side streets in Lower Manhattan and Brooklyn – have ranged from the defacing of images to offers of huge sums for walls Banksy has painted.

"Somebody offered me a million dollars if I took down the bricks," said Jose Goya, the manager of a Williamsburg, Brooklyn building that Banksy spray-painted Wednesday night. Goya turned the buyer down and had Plexiglas placed over the Japanese-themed image of a man and a woman crossing an arched bridge. The art has a black squiggle spray-painted over it, the work of an apparent Banksy hater who, according to Goya, was stopped mid-defacement by a group of men who tackled him.

The mysterious Banksy is calling his month in New York his "Better Out Than In" residency. Among his works so far: the image of a Ronald McDonald statue getting his red clown shoe shined, which appeared in the Bronx on Tuesday, and a livestock truck adorned with children's stuffed farm animal toys – a mobile installation Banksy calls "Sirens of the Lambs."

Every morning, he announces the location of each piece on his website and invites people to call a hotline for droll descriptions of the artwork's inspiration. The art is defined in part by the artist's mystique.

It is still uncertain whether Banksy, who remains unidentified since emerging in England in 1993, is one artist or a group. In the 2010 documentary about Banksy, "Exit Through the Gift Shop," which received widespread critical praise, the artist is always shrouded in a head covering or his face is hidden in shadows. "He's sort of like Batman," Matt Adams, a Williamsburg resident, said as he photographed the Japanese-themed stencil.

"No one knows who he is, he does his work under cloak of darkness and everyone in New York is looking for him."

The New York Daily News reported this week that the New York Police Department (NYPD) is searching for the artist to charge him with vandalism. An NYPD spokesman would not confirm or deny a Banksy manhunt, but said the department's vandal squad investigates all graffiti complaints.

New Yorkers have flocked to Banksy's art, eager to view pieces before they are defaced or removed, possibly by rival artists or those who think Banksy's work is shallow and his fame undeserved. "I will hand it to him that it's clever, but it's one step away from really smart marketing," said New York radio DJ AndrewAndrew, who works with a DJ partner also named Andrew.

The DJ duo – both of whom are contractually obliged to use the name AndrewAndrew – criticised Banksy's work on the air last week as less skilled and less meaningful than some other American graffiti artists such as Shepard Fairey, who designed the red-and-blue "Obama Hope" poster.

An image of the Twin Towers destroyed in the September 11 2001, attacks that had been spray-painted by the artist on a wall in Brooklyn Heights was removed Thursday night after less than a week in place. It is unclear who was responsible.

Last Sunday, Banksy set up a table in Central Park selling small canvases with his trademark image of a rat for $60 a piece, according to his website. Six people, unaware of the art's worth, bought canvases, including a Dutch tourist who bargained the price down to $30, according to Banksy's website.

Banksy's art has sold for as much as $1.87-million, according to Sotheby's auction house. Among the hundreds who arrived to see Banksy's art on the Williamsburg wall was Evan Mannell, an Australian musician visiting New York who has rushed to three Banksy images.

"Think of it like a jazz solo," he said. "Unless someone records it, it's all finished and it's over. I want to see Banksy's pieces before they're gone." – Reuters