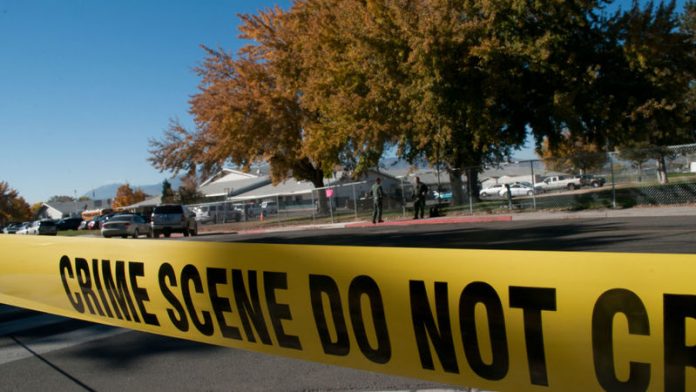 A 12-year-old pupil armed with a semi-automatic handgun shot and killed a maths teacher and critically wounded two classmates before killing himself at his Nevada school on Monday, law enforcement officials said.

Witnesses described a chaotic scene at the school in the north-western Nevada town of Sparks, just east of Reno near the California border, after the gunfire erupted outside classrooms as pupils were arriving for the school day.

"A kid started getting mad and he pulled out a gun and shoots my friend, one of my friends at least," a grade seven pupil identified as Andrew Thompson told local television station KOLO. "And then he walked up to a teacher and says, 'Back up'. The teacher started backing up and he pulled the trigger."

"The teacher was just lying there and he was limp," he told KOLO. "And me and five other friends went to him and said, 'Come on, we've got to get him to safety'. We picked him up, carried him a little bit and we left him because our vice-principal came along and said, 'Go, go, go get to safety, get to safety'. So we left the teacher there and we went to safety."

The incident marked the latest in a string of shooting rampages across the United States in recent years, including a shooting last December at a Connecticut elementary school that killed 20 pupils and six adults and helped reignite a national debate over gun control.

The slain educator at Sparks Middle School was identified by his family as 45-year-old maths teacher Michael Landsberry.

Authorities declined to identify the two wounded pupils, both age 12, who acting Sparks Police Chief Tom Miller said were rushed to a Reno hospital where one had emergency surgery.

One of the boys sustained a gunshot wound to the shoulder and the other was hit in the abdomen, he said, and were listed in stable condition on Monday afternoon.

Teacher called hero
Family members of Landsberry, a former Marine who was also a member of the Nevada Air National Guard, described him as a hero who tried to persuade the young gunman to drop his weapon.

"[He was] probably trying to stop that kid from hurting himself or anyone else," his sister-in-law Chanda Landsberry said.

Law enforcement officials said the pupil gunman opened fire with a semi-automatic handgun at 7.16am local time (2.16pm GMT), about 15 minutes before classes were scheduled to begin at the school, which serves about 700 grade seven and eight pupils.

A 13-year-old eighth grader, Kyle Nucum, told the Reno Gazette-Journal newspaper that he heard about half a dozen shots. Pupil Michelle Hernandez said she had seen the suspect before the shooting began.

"I heard him saying, 'Why you people making fun of me, why you laughing at me'," Hernandez told the paper.

No ID
The 12-year-old shooter was not identified by authorities.

About 150 to 200 police officers descended on the school following the shooting and searched the grounds with bomb dogs, Reno Deputy Police Chief Tom Robinson said. Agents from the FBI and US department of homeland security were assisting in the investigation, he said.

Sparks Mayor Geno Martini told a late-morning news conference that the shooting marked a tragic day for the city: "I just want to reiterate again that the city itself is very safe and this is just an isolated incident. But it's very, very tragic."

Robinson said it was too early to tell if the boy was targeting anyone in the shooting rampage. Authorities also declined to immediately speculate on his motives.

Classes and after-school activities were cancelled at Sparks Middle School for the rest of the week and counsellors would be on hand to work with pupils and staff members who were traumatised by the shooting, the school district said. – Reuters

US state poised for first execution with fentanyl

Fentanyl killed more than 20 000 people in the US in 2016. It is 50 times more powerful than heroin and up to 100 times stronger than morphine
Read more
World

Within minutes of the shooting at YouTube offices in California, social media was awash with conspiracy theories
Read more
World