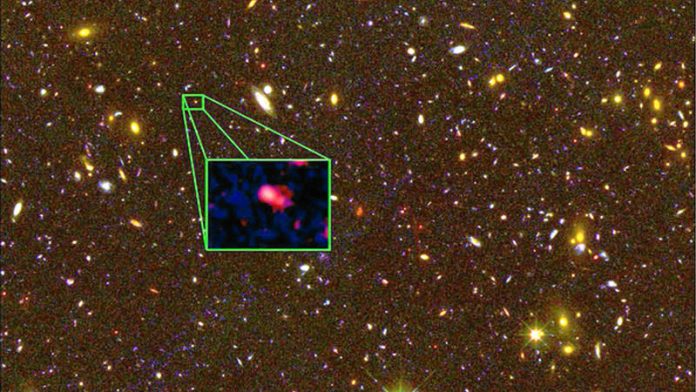 Astronomers have spotted the most distant galaxy ever seen after a faint ray of light struck a telescope on a volcano in the middle of the Pacific.

The ancient group of stars lies 30-billion light years from Earth, far beyond the handle of the Big Dipper that traces the outline of a celestial saucepan in the constellation of Ursa Major.

Researchers detected the galaxy with a new infrared instrument that was fitted last year to the Keck telescope that sits on the summit of Mauna Kea, a dormant volcano in Hawaii.

Analysis of light coming from the galaxy showed that it formed only 700-million years after the Big Bang, or 13.1-billion years ago, making it the oldest and most distant galaxy known.

"This is really a quest to understand our origins," said Steve Finkelstein, an astronomer at the University of Texas at Austin in the United States. "By trying to push further and further back in time, we are really studying the origins of our own Milky Way galaxy."

Because the universe is expanding, light from stars and other celestial objects is stretched out as it travels through space. This increases its wavelength. The effect is called the red shift because it makes visible light look redder.

Finkelstein used the Mosfire (multi-object spectrometer for infra-red exploration) instrument on the Keck telescope to survey 43 distant galaxies that had been glimpsed by the Hubble Space Telescope but never confirmed. The device picked up light from only one, a galaxy that goes by the cumbersome name of z8_GND_5296, according to a report in the journal Nature.

The light coming from the galaxy was more red shifted than astronomers had seen before, making it 40-million years older than the previous record holder, and its colour suggested it was rich in metals.

The scientists have a few potential explanations for the ­galaxy's extraordinary rate of star creation. It may contain more gas than expected, which is used in the manufacture of stars. Or it may be drawing in gas much faster from the space between galaxies. Finkelstein hopes that follow-up observations will now answer the question.

The search for distant galaxies is driven by the aim to find, ultimately, the first ones to form in the universe. These galaxies could have been home to stars that produced the first batch of natural elements heavier than helium when they exploded at the end of their lives.

Astronomers may struggle to find more distant galaxies with the telescopes operating today. But towards the end of the decade, Nasa expects to launch the James Webb Space Telescope, which has been designed to look even further back into the history of the universe. &ndash; © Guardian News & Media 2013