Black and white, in the red all over 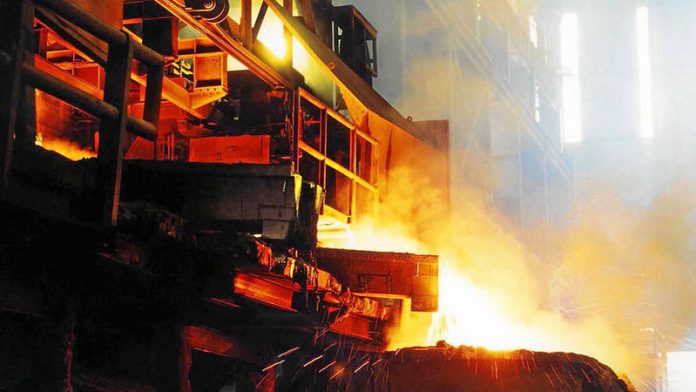 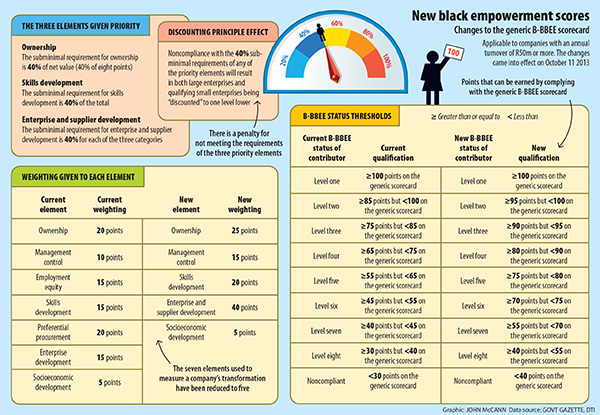 The new codes of good practice issued in terms of the Broad-based Black Economic Empowerment Act have been gazetted and companies and businesses in South Africa have a year to align themselves to the new rules.

This will take some time as the new codes use different measuring criteria, and the points allocations against desired thresholds and the targets are significantly different to those in the old codes.

The changes have come about because of the apparent ease with which businesses have been able to achieve high compliance levels without undergoing real transformation.

The changes are probably directed at addressing the formalistic tick-box approach to black economic empowerment (BEE).

The need for a new set of codes was justified as the old codes had resulted in narrow empowerment that benefited "the usual suspects" with an emphasis on black economic empowerment share-based transactions.

Banks, corporate finance professionals, specialist lawyers and other advisers have been only too happy to assist in this process.

It is remarkable how similar this sector is to the industry surrounding tax advisory services.

Black economic empowerment rules are complex. It takes time, skill and expertise to understand how they work and, even then, there are any number of technicalities that remain unresolved. Like tax, it is not an area for the layman.

Indeed, the best and most expensive BEE advisers have emerged from legal and auditing firms that already had a well-established tax advisory business.

Indeed, foreign investors mostly view BEE as just another tax, and adjust their investment decisions accordingly. They are not wrong — BEE is a tax.

On the face of it, there is little wrong with an additional tax surcharge dedicated to addressing structural imbalances in the economy. But does the tax achieve what it sets out to do?

Ownership's weighting has increased, the score allocated to broad-based groups within the ownership element is reduced and ownership is a priority element — meaning enterprises subject to the codes cannot avoid the issue of ownership by focusing on other areas.

There are other ownership kickers: small businesses with revenues of less than R10-million a year and exempted under the codes automatically achieve level one compliance if they are 100% black-owned and level two if they are more than 50% black-owned.

Businesses larger than that have to comply with the rules relating to ownership and there is now little difference between qualifying small enterprises and large business in terms of compliance.

It is here, rather than in micro enterprises, where real job creation occurs.

Wide support
The stated objective of the Act — transforming South Africa's economy and addressing inequality and its racialised patterns of ownership — enjoys wide support across the spectrum.

But whether the Act or its codes are the best tool to achieve this is far from clear.

In the trade and industry department's presentation on the new codes presented at its BEE Summit earlier this month, several other government initiatives such as the Accelerated and Shared Growth Initiative, the New Growth Path, the Industrial Policy Action Plan and others were lined up with BEE initiatives and presented as integrated into other objectives such as industrialisation, skills development, localisation, job creation and supplier development.

A telling graph in the presentation was that the standard measure of inequality has increased since 1995, not lessened.

The truth is that broad-based black economic empowerment has never aligned to any of these other objectives.

Many of the elements contained in the codes are dealt with in other legislation — for example, employment equity is dealt with in the Employment Equity Act and ownership, socioeconomic development and skills development are addressed in mining licences.

Despite several efforts by organised black business to change this to favour broad-based black economic empowerment, the treasury chooses to emphasise value for money and shows no signs of budging from this position.

The treasury is different from, say, the trade and industry department, the public enterprises department and so on.

It is responsible for the collection of taxes that fund a trillion-rand annual government budget that funds a growing public servant wage bill, an expensive education system, an expanding health system and a burgeoning social grants system. It also funds the servicing of existing government indebtedness.

The expenditure on education, health and social grants benefits people who do not have access to the formal economy and for whom broad-based black economic empowerment means very little.

How is this balancing act doing? Not well.

Increasing gap
The current budget deficit is running at 6% and this gap has steadily increased since 2008.

It goes without saying that this cannot continue forever. The only debate is how long it can continue.

So, there are two principal reasons why the treasury might be wary of the focus on ownership-based black economic empowerment: maintaining investment in the economy and preserving the tax base. A typical BEE transaction involves the sale of a defined shareholding (the BEE stake) to a black grouping or structure established for this purpose.

The BEE stake is typically financed using debt or debt-like structures. This debt could be provided by the sellers of the shares or by a bank using commercially based interest rates.

The net result of this across the economy is that capital, once invested in productive assets, leaves the economy, is invested elsewhere, is spent on consumption items and is replaced by debt.

This has a familiar ring to it. The disinvestment campaign spearheaded by the Anti-Apartheid Movement in the 1980s to get multi­nationals to leave South Africa was aimed at harming the economy.

Building the balance sheets
Banks get to build their balance sheets by funding transactions that otherwise would not have happened.

The other side of the problem is increased levels of debt: in general terms, interest payments on debt can be deducted before taxable income is determined.

Now, although it is standard practice that money borrowed to purchase shares does not permit you to deduct interest, several tax structuring schemes to support BEE transactions have attempted to circumvent this.

The South African Revenue Service makes a considerable effort to plug these holes. But there are deeper concerns: more debt in our businesses means creeping "financialisation" of the economy.

It could all make sense if it all worked out in the end but it does not. Dividends from shares rarely pay more than the interest charged to pay for them. And you can't deduct the interest from the secured loan to pay for the shares.

The only hope is that the share value completely outperforms — but when this happens, it is good fortune and not the basis of a sound working assumption.

The funders and the advisers, however, have made real money along the way.

But even when a scheme does do well, there is another problem: companies have a direct interest in retaining whatever black share ownership they have, so these BEE shares are subject to several restrictions.

This includes the fact that BEE shares can only be sold to others with the same BEE profile: blacks can only sell to other blacks. This has the absurd result that a two-tier capital structure develops: one class of shares is easily tradable without restriction; the other class is illiquid.

The basic criterion for being a capitalist is being able to decide how to deploy your own capital. Most BEE shares fail this test.

Why? The recent International Monetary Fund report on South Africa painted a bleak picture of our slow-growth economy.

Though much comment has centred on our labour relations regime, the report also puts business, particularly big business, in the dock.

Costly regulation, including BEE compliance, makes it harder for small business to take on big business. The creation of sustainable new firms in South Africa is among the lowest in the world.

For established business, this works well. South African big business is more profitable than similar businesses elsewhere in the world.

A black capitalist class is essential, but the emphasis of the codes for broad-based black economic empowerment on ownership is a failed experiment. Worse than that, it distracts us from what really needs to be done to develop an inclusive and high-growth economy.