The adverts were put on 10 pillars in the arrivals section of the airport in August 2012. They depicted a lioness with a gun pointed at its head. President Jacob Zuma is in the background, with a caption saying, "Our lions are being slaughtered to make bogus sex potions for Asia. Will President Zuma save them? Urge him to stop the deadly lion bone trade now."

Avaaz had a contract with Primedia and the Airports Company of South Africa to run the adverts in the terminal for a month. They were controversial and after nine days were taken down. Communications between employees of the airports company, contained in the court papers, showed that they were worried that the inclusion of President Zuma would cause a "public relations nightmare". 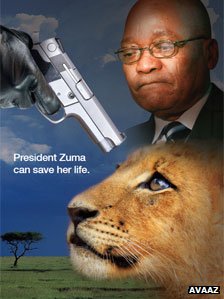 Another internal email from Tebogo Mekgoe, the airport's assistant general manager, said there was "an implicit message in the content of the advert that says the president is standing by while our lions are being killed and is thus complicit in the killings".

The advocacy group challenged the removal in court, arguing that their Constitutional right to freedom of speech had been violated. They had also not been given their guaranteed fair process, as the adverts had been removed before they were consulted.

Unconstitutional
​The Constitutional Court agreed with the advocacy group and said the airports company had acted unconstitutionally in taking the posters down and that this had to be remedied. It ordered that the adverts be put back up in the airport.

A petition by Avaaz demanding that President Zuma stop the trade in lion bones was signed by more than 700 000 people.

South Africa is the largest exporter of lion bones and the latest government figures show a 250% increase in these exports between 2009 and 2010.  Yet in May, the Government decided against taking action on this issue. In part as a result of this trade, reports estimate that the lion population in Africa has dropped from roughly 200 000 in the late 1970s to approximately 20 000 today with only 2 200 of those remaining in South Africa.

Avaaz has 240 000 members in South Africa and over 27-million members from all over the world.

The soaring demand for lion bones – South African exports grew 250% between 2009 and 2010 – has been driven by the scarcity of tigers in Asia. Their bones are now being used in traditional brews which in lieu of tigers. These are thought to have healing properties – a similar belief to the one that has driven the massive growth in rhino poaching.

There are an estimate 2 200 lions left in the wild in South Africa, with another 4 000 coming under the ownership of captive lion breeders. A full set of a lion skeleton could be sold for as much as R40 000. The trade is legal in South Africa, which is what drove Avaaz do ask that it be banned.