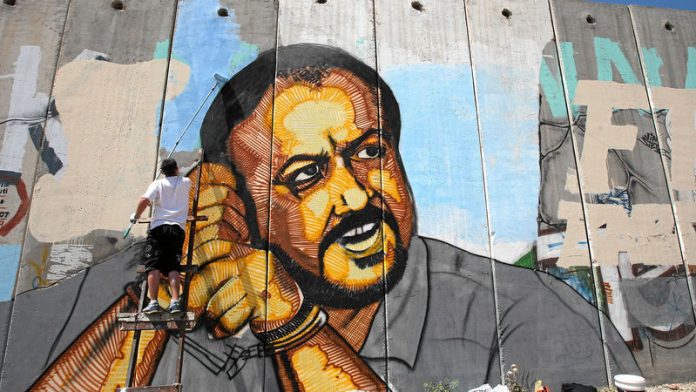 The wife of Marwan Barghouthi, a prominent ­Palestinian political ­figure, says she is hopeful that an international campaign calling for his release, which will be launched in South Africa this weekend, will bear fruit. But the Israeli embassy in South Africa has questioned the term "political prisoner", saying those imprisoned in Israel have been convicted in court of offences related to terror activities.

The international campaign for the release of Marwan Barghouthi and all Palestinian political prisoners will be launched by the Ahmed Kathrada Foundation and the Palestine-based release campaign on Robben Island on Sunday October 27.

Barghouthi was arrested on charges of murder and attempted murder in 2002, and sentenced to five life sentences and 40 years in prison in 2004.  Throughout his trial, he refused to recognise the legitimacy of the Israeli court or to defend himself.

Sunday's launch, during which a declaration will be signed in the cell famously occupied by former South African President Nelson Mandela, will be attended by Barghouthi's wife, Fadwa, as well as Issa Qaraqe, the Palestinian minister of detainees and ex-detainees, several prominent South African politicians and representatives of various human rights organisations.  An international high-level committee in support of the campaign, comprising, among others, five Nobel peace prize laureates, will be announced on the day.

Speaking to the Mail & Guardian on Skype, Fadwa Barghouthi said the fact that the campaign was being launched on Robben Island would send a clear message to the world. "We are proud, first, that it will be launched in a place which witnessed humanitarian struggle, which is an important symbol for freedom fighters around the world. This gives us hope that the same story of ending apartheid in South Africa will also happen in Palestine – that the occupation will end," she said.

"The fact that this is happening in South Africa reconfirms the fact that the Palestinian struggle is part of an international struggle against oppression and racism around the world.

"Having big names like Ahmed Kathrada supporting us sends an important message to Palestinian prisoners and their families that they are freedom fighters, just like Kathrada and Nelson Mandela."

Apartheid struggle stalwart Kathrada said the issue of Palestinian prisoners was very close to his heart.

"I believe, after 26 years of imprisonment, I came out stronger in my belief in the indestructibility of our struggle," he said. "Being aware of the similarities between our struggles, I believe a concerted international campaign may not have immediate results, but it will be the foundation of a worldwide campaign to reach out, not only to sympathetic countries, but more especially to civil societies in as many countries as possible.

"Our Palestinian comrades were excited about [the venue]. For one thing, Robben Island represents the triumph of the forces of good over evil. It was a former Robben Islander [Mandela] who walked … from prison to Parliament, to president."

The Inter-Parliamentary Union, in a resolution adopted unanimously on October 19 2011, stated that Barghouthi's arrest and transfer to Israeli territory was "in violation of international law" and reiterated its call for "his immediate release".

Similarly, the European Parliament called for "the immediate release of the imprisoned members of the Palestinian Legislative Council, including Marwan Barghouthi".

According to a report published by Addameer, a Jerusalem-based prisoner support and human rights organisation, "over the past 45 years, more than 800 000 Palestinians have been detained under Israeli military orders in the occupied Palestinian territory, which constitutes about 20% of the total Palestinian population".

The report also highlighted issues such as overcrowded and unhygienic prison conditions and medical neglect of Palestinians.

"As of April 1 2013, there were 4 900 Palestinian political prisoners in Israeli jails, including 168 administrative detainees, 236 children, 14 female prisoners, and 14 Palestinian Legislative Council members," it said.  Administrative detention is a procedure that allows the military to hold prisoners indefinitely on secret information without charging them or allowing them to stand trial.

But Michael Freeman, the deputy head of mission of the Israeli embassy in South Africa, questioned the validity of the figures.

He also said that the term "political prisoner" was misleading. "There are no political prisoners as such. The people currently in Israeli prisons are those convicted in a court system of offences related to terror activities, including murder and bombings aimed at Israeli civilians of all backgrounds and ages."

When asked what he thought about the fact that a South African organisation was spearheading the campaign for the release of Barghouthi and other Palestinians, Freeman said it was "good that South Africa has a good relationship with the Palestinians".

"We think they should use it to encourage the peace process. The only way forward is to sit down with Palestinians and arrive at a solution of two states, for two people living side by side in peace. That's our dream and hope."

The Boycott Divestment and Sanctions movement of South Africa (BDS-SA) says it will launch a local campaign on Robben Island against the British-Danish security company G4S this weekend, alongside the campaign calling for the release of Palestinian political prisoners.

The company has been facing increasing criticism and pressure on the international front for its links to Israel.  Earlier this month, the Norwegian trade union Industri Energi terminated its contract with G4S as "an act of solidarity with the struggle of the Palestinian people".

Kekana said BDS-SA would encourage South African individuals, businesses and organisations to follow suit.  It has already approached the National Union of Metalworkers of South Africa (Numsa) and the Trauma Centre, which provides trauma counselling to victims of violence and torture to ask them to terminate their contracts with G4S.

Castro Ngobese, the national spokesperson for Numsa, said:  "We agree with their cause, and if … G4S is working in cahoots with Israel to deny Palestinians … [their] freedom, then nothing will stop us from cutting ties with them."

James Taylor, the chairperson of the board of the Trauma Centre, said BDS-SA's request was being taken seriously and would be tabled at the centre's board meeting next week.

Adam Mynott, the G4S group media relations officer, said: "The extent of our involvement at a prison, a police station and a small number of checkpoints on the West Bank border is the servicing of scanning equipment and other security systems."