Abyei residents vote on whether to join Sudan or S Sudan 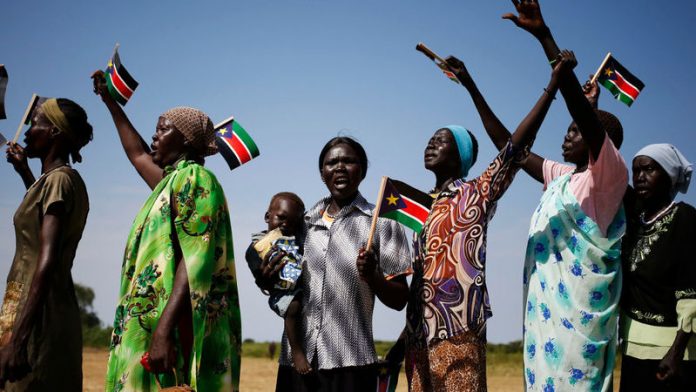 Residents of the flashpoint Abyei region claimed by both Sudan and South Sudan were voting on Monday in an unofficial referendum to decide which country they belong to, a move likely to inflame tensions in the war-ravaged region.

"The vote is for the people of Abyei to choose their future," Luka Biong, spokesperson for the Abyei Referendum High Committee, said.

The fate of Abyei is one of the most important and sensitive issues left unresolved since South Sudan became an independent state in 2011, ending two decades of civil war in Sudan.

"It has been proceeding well, it is being carried out in peace, and we have already seen large numbers turn out," added Biong, an academic and former senior official in South Sudan's ruling party.

The majority of 65 000 registered voters have already cast their ballot in the three-day vote that began Sunday, he said.

Both Khartoum and Juba have criticised the vote, with South Sudanese government spokesperson Michael Makuei saying it was "not a party to it" as it wanted a referendum "run according to the agreed system."

Bashir, speaking in parliament Monday, said he would work with Kiir to "reach a solution for Abyei that can bring satisfaction to the local communities there".

Not recognised
Patrolled by some 4 000 Ethiopian-led UN peacekeepers, the area is home to the settled Ngok Dinka, closely connected to South Sudan, as well the semi-nomadic Arab Misseriya, who traditionally move back and forth from Sudan grazing their cattle.

Only the Ngok Dinka are voting in the referendum – although organisers insist it is open to all – and the Misseriya have already angrily said they will not recognise the results of any unilateral poll.

Abyei was meant to vote on whether to be part of Sudan or South Sudan in January 2011 – the same day Juba voted overwhelmingly to split from the north – as part of the 2005 peace deal which ended Sudan's civil war.

That referendum was repeatedly stalled, and Sudanese troops stormed the Lebanon-sized enclave in May 2011 forcing over 100 000 to flee southwards, leaving a year later after international pressure.

Ngok Dinka leaders last week said they would press ahead with their own vote.

However, the United Nations and AU have warned that any such unilateral move could inflame tensions in the oil-producing zone and risk destabilising the uneasy peace between the longtime foes.

An Agence France-Presse photographer in Abyei said long lines of residents were lining up to cast their vote, with ballot papers marked with two symbols to chose from: a pair of clasped hands symbolising a vote to be part of Sudan, and a single hand if people want to join South Sudan.

"There are long queues of people, but things are peaceful and calm," said Rou Manyiel, chairperson of the Abyei civil society organisation and a senior Ngok Dinka community leader.

Significance
Abyei, once oil-rich but with production now tailing off, is a key area of emotional and symbolic significance for both the fledgling South and the rump state of Sudan.

On Sunday, the African Union accused the Sudan government of preventing an AU delegation from visiting Abyei, accusing Khartoum of blocking it "for contrived security reasons".

Top Misseriya leader Mukhtar Babo Nimir has said his people have the option of also holding their own unilateral referendum if, as they have now done, the rival Ngok Dinka hold their own ballot.

"What happens in this referendum is none of our business. We don't care about it," said Nimir.

International pressure eventually reined the two sides back in, with leaders signing a raft of deals, most of which however are yet to be implemented.

When South Sudan split away, it took with it oil fields accounting for 75% of the reserves – with production totalling some 470 000 barrels per day – that Sudan used to call its own.

Landlocked South Sudan complained that the north was demanding too much to use its pipelines and port facilities, and the shutdown cost both countries billions of dollars. – AFP